Derry City's problems in this season's eircom League of Ireland Premier Division continued at a breezy Brandywell, the pre-season league favourites stunned by the students of UCD with a goal on the break in the 82nd minute.

And the winner was created when Paul Crowley, who scampered up the right flank to find the hard working Conor Sammon and he played in the unmarked substitute, Timmy Purcell to tap home from close range.

With just one victory at home – the opening match against Bray Wanderers – the Foylesiders' poor run of form continues and there's no doubt now that manager Pat Fenlon must surely be feeling the pressure.

In what proved an instantly forgettable first half, it was UCD who created the better chances with a strong breeze at their backs.

Paul Byrne had a great chance to open the scoring on 14 minutes following a Derek Doyle corner, but his header was directed straight at Derry 'keeper Pat Jennings.

And eight minutes later the same player brought the best out of Jennings when another header forced the netminder to touch the ball over his crossbar.

While the home side may have enjoyed long spells of possession, the only clear-cut chance created fell to substitute Paddy McCourt on the stroke of half-time. However, the winger curled the ball wide of the target from a decent position.

In fact, the home side will be concerned following an injury to midfielder Kevin Deery, who was stretchered off with what appeared a nasty leg injury which saw McCourt summoned from the bench.

After the break, while enjoying the benefit of the wind, Derry may have owned the ball but their forward players never seemed to be involved.

And with the game having seemingly having 'scoreless' written all over it, Purcell's strike with eight minute remaining sent shock waves through the home attendance.

Derry substitute, Peter Hynes, then brought the best out of UCD 'keeper Matt Gregg. The UCD stopper had to divert a strike resulting from Hynes' first touch over the crossbar.

Hynes went close again after 87 minutes but on his occasion his low shot was blocked inside the crowded goalmouth. With this win the students leapfrogged Derry in the table; the Candystripes now ten points adrift of the leaders. 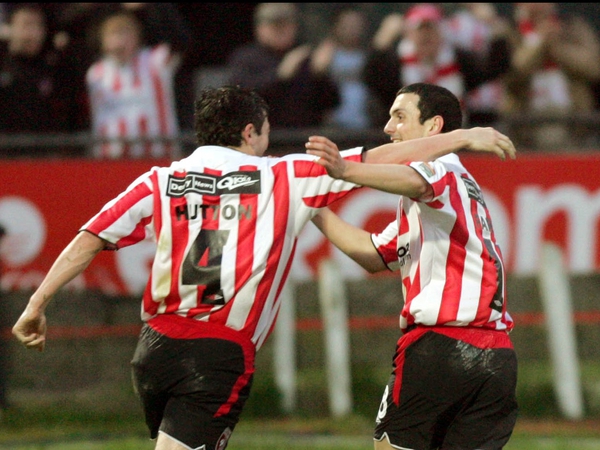