Doherty tweeted that facing the former professional was a "tough match against an experienced player" and said he was glad to have progressed.

The 1997 champion needs another two victories to qualify for the tournament proper.

Hossein Vafaei Ayouri of Iran or China's Tian Pengfei await the Dubliner in the second round.

Limerick cueist Leo Fernandez was beaten 10-4 by Gary Wilson, while 20-year-old Josh Boileau, who will play on the pro tour this season, lost 10-2 to two-time world finalist Matthew Stevens.

I'm in the next round,tough match against an experienced player but glad to get thru,roll on Sunday n Monday pic.twitter.com/89flALCxvg

Northern Ireland's Gerard Greene ended Jimmy White's chances of a first appearance at the Championships since 2006 in one of the first completed qualifiers.

The six-time world finalist lost the final three frames of his match against world number 65 Greene to bow out 10-9.

2015 Irish amateur champion Brendan O'Donoghue lost 10-5 to Leeds potter David Grace, while Ng On Yee's hopes of becoming the first female player to qualify for the Crucible were brought to a swift end as the 2015 women's world champion lost 10-1 to Peter Lines.

In games yet to start, Fergal O'Brien faces six-time champ Steve Davis, Cork's Greg Casey must play world number 17 Ding Junhui, while Mark Allen, winner of the Players Championship and currently ranked world number seven, will be in action in the first round proper 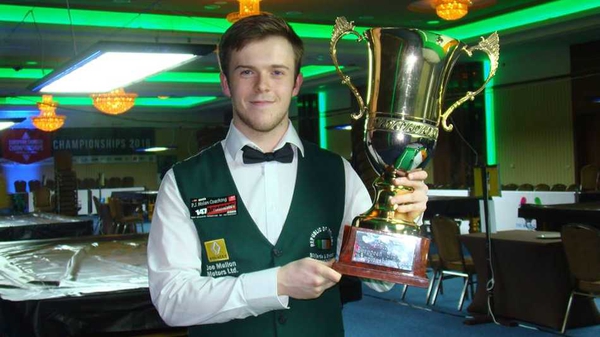