Andy Farrell's side left with a 24-12 defeat but, as the head coach admitted afterwards, the scoreline did not tell the tale of the game.

With Ireland's home tie with Italy, which was supposed to be played on 7 March, cancelled due to coronavirus fears, the squad must endure a three-week gap until the following weekend until they can try to rectify some of the wrongs from the performance last Sunday.

"Personally when you play bad you want to go and play straight away," the out-half told reporters in Dublin.

"I was almost tempted to go and play for Leinster [v Glasgow in the Pro14 tonight].

"There's nothing worse than a long wait but it is what it is. We've just got to prepare, we trained hard today and we have another big week next week and we can get a lot fixed over the couple of weeks.

"We've got to look at the positives that we have a bit of time and develop some things together."

The captain also responded to criticism of his own performance in the light of a poor outing in London.

"I'm my biggest critic," he said. "I've been gutted for the last three or four days, absolutely gutted with my performance.

"I was full of confidence going into the game and sometimes you have one of those days where the bounce of a ball will affect you and it just knocks on a few errors. 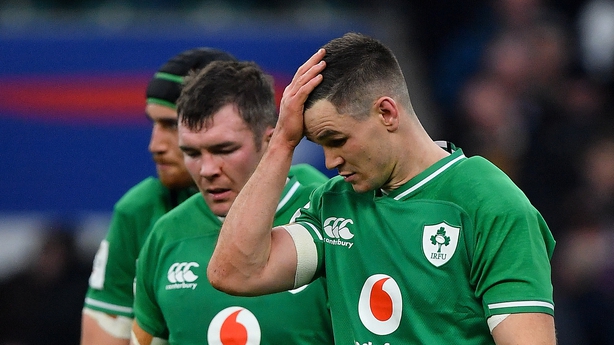 "It's not a day I'll remember fondly. I'm well used to the criticism, I've had it my whole career. One week, you're good, one week you're bad.

"It is what it is and I'm well used to the criticism, I’ve had it for my whole career. One week you’re good and one week you’re bad. So keep it coming."

"We would just have preferred if it was two weeks [until the next game].

"But it's not, it's three weeks and that's the bottom line. We just have to get over it. It's a decision that has been taken out of the players' hands.

"We'd play it behind closed doors if we could but that's not an option and we're just going with the plan now. We'll try and get ready for France."

Farrell also gave his reaction to the cancellation, which causes a fixture headache for Six Nations organisers, who must now find a date to fulfill the fixture.

Should the Italy v England match, down for 14 March also fall victim, it would complicate matters further.

"Obviously, we're disappointed not to play again after a loss," he said.

"That's the first thing you want to do. Work out the reasons why and then get back out there on the pitch and put those things right.

"We're disappointed but it's the right decision, isn't it? There's more important things than a game of rugby."