The old adage that you learn more in defeat than you do in victory was popular this week as commentators tried to put some gloss on Conor McGregor’s first UFC loss.

That’s probably true in the case of the Dublin MMA fighter, and in general, but for Ireland it’s hard to argue that they learned anything they didn’t already know from their two defeats in the Six Nations campaign so far.

Joe Schmidt would have been able to tell you beforehand that a) it’s tough to win a Test without so many first-choice players, b) that you should be more clinical in the red zone and c) that you can’t rely on the officials to get everything, or in the case of the France game, almost anything, right.

For all that, Ireland are without a win from their last four games but, while it looks bad on paper, apart from the Argentina game, they were in with a good shout in the other ties.

One more penalty against Wales, a different referee in Paris, and a little more precision against England, and there would be a different narrative going into the contest with Jacques Brunel’s side.

Ireland probably have what they deserve so far but the point is that they are not far off clicking and getting a win on the board.

Invariably, in recent years, this fixture has been referred to as a ‘potential banana skin’, a trap just waiting to be sprung.

However, with Ireland’s title interest gone, that’s not true this year. There’s no eye on a Grand Slam next week, no inkling of a points-difference title to be won.

Even ahead of the England game, Schmidt hinted that the pressure was off in terms of silverware, and while the remaining ties must be treated as standalone Test outings, there is still a sense of disappointment around his selection.

It was felt that the ex-Leinster coach, in direct contrast to the last two seasons, could afford to reassess the campaign and what could be gleaned from it.

But there’s no place in the squad for impressive Twickenham debutant Stuart McCloskey, with Jared Payne returning to fitness and slotting back in at centre beside Robbie Henshaw.

Schmidt has resisted the temptation to bring Payne in at full-back, where Simon Zebo comes in for the injured Rob Kearney.

"What we lack with Jared Payne not in the midfield has been particularly evident for us, particularly on the edge in defence,” said Schmidt. “We're looking for him to control our defence again in the frontline.”

It’s not going to happen anytime soon but Ireland could have manufactured their own bonus if they could have put together an 80-minute performance, continued bedding in of some of the new players, and, of course, got a win.

If there ever was a game where Payne could have been given a run at 15, this was it.

However, that four-game streak without a win is first and foremost on the coach’s mind and he reverts to what he knows.

Those are the only two changes to the team beaten by England, although prop Cian Healy has withdrawn because of a hamstring strain and his place on the bench goes to Connacht's Finlay Bealham.

Adding to the sense of what could have been is Italy’s form and injury problems.

They have lost 12 of their last 13 games in the competition, and Ireland have won all eight of their previous Six Nations meetings here.

The Azzurri are missing the experience of hooker Leonardo Ghiraldini (81 caps), replaced by Davide Giazzon, while Guglielmo Palazzani comes in for scrum-half Edoardo Gori (50).

They’ll have a new half-back partnership with Edoardo Padovani, making his full debut, at out-half in place of Kelly Haimona. Lock George Biagi stands in for the injured Josh Furno. 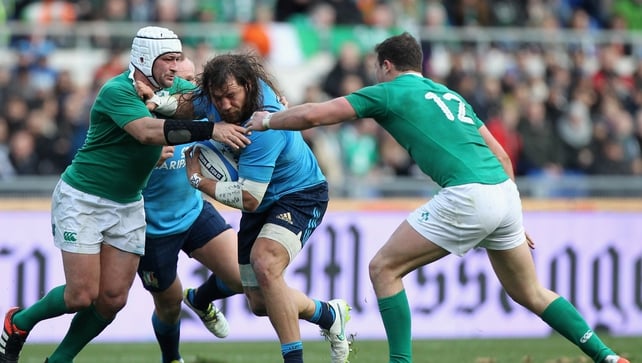 In addition, Martin Castrogiovanni misses out though suspension and although the 118-cap prop isn’t a starter these days, his loss for the trip will be felt.

Italy are also without a win this year. They just about avoided victory over France, held England for 55 minutes and fell to an inspired Scotland performance two weeks ago.

It has almost become boring to highlight the contributions of their main man, Sergio Parisse, but he is the fulcrum of the side and it sometimes seems as if there are two of him on the pitch at any one time.

And how they could do with two of him. So far, the Stade Francais number 8, who will win his 118th cap, has made 53 carries for 211 yards, the most of any forward.

CJ Stander, outstanding in his first three games for his adopted country, is just two behind on the list of carries.

Italy have conceded 34 penalties in their three games so far, while Sexton has a 100% kicking record.

The visitors struggled badly in the scrum against Scotland and Ireland will hope to get on the front foot early in that battle.

Italy will target Ireland’s lineout, which is down to 77% and the worst in the competition. It’s a notable stat, particularly in contrast to the World Cup where they lost just one of 56 throws.

Ireland will win this game, not least because they have to, and the train will be back on track again.

The result against Scotland the following week will decide how much steam is in the engine ahead of the three-Test summer tour of South Africa.

Joe Schmidt: “I've been coaching professionally now for 15 years and I've seen a lot of young players really hampered by being thrust into an environment they are not ready for.”

Jacques Brunel: "This will be a complicated match. Ireland like us are still looking for their first victory in the Six Nations and also have to deal with numerous absences, again like us."

• Two tries for Ireland in this game would see them score their 200th in the Six Nations era; only England (241) have already reached this milestone with Ireland and France both second on 198 going into this weekend.