Ireland lost their RBS 6 Nations opening clash with Wales in controversial circumstances at Aviva Stadium as a last- minute penalty gave the visitors a two-point victory.

The home side were defending a one-point lead on their own 22-metre line when Stephen Ferris put in what looked like a regulation tackle on Wales second row Ian Evans.

But to Ireland’s dismay, Barnes awarded a penalty for an illegal tackle, and replays confirmed that the Welsh second row's feet had been lifted above his hips as Ferris drove into the tackle.

Leigh Halfpenny, who had missed another potential match-winning kick from the touchline moments before, stepped up to take 'the hardest kick I've had to take in my life' and put it over with some conviction.

Ireland will probably be desperately unhappy with Barnes’ decision but, in truth, they should have been out of sight by then.

They got off to the perfect start, Sexton slotting a penalty inside the opening minute to establish a quick lead.

Moments later, Ireland almost caught Halfpenny behind his own line but the Welshman slipped clear and Wales started to come into the match with the impressive Rhys Priestland and Mike Phillips orchestrating things from half-back.

And it was Wales who got the opening try.

A lineout throw to a charging Bradley Davies at the front got Ireland scrambling and they survived two close shaves in quick succession: Tommy Bowe's hand knocked down what might well have been a scoring pass before a trio of defenders did just enough to keep Ryan Jones from grounding the ball for a try.

In the end, as had happened in Wellington, a shortage of numbers on the blindside cost Ireland though credit must go to Rhys Priestland for his smart offload around Bowe's back, which released Jon Davies for the first of his two tries on the day.

Priestland and Wales looked in total control of the match for a period around that try, but Ireland came into the match thanks to big plays from a few of the marquee names.

Their mini-revival began when O’Brien embarked on a bullocking run after the Welsh out-half pranged the upright with an easy penalty chance.

That was followed by a fantastic catch by Kearney from a steepling Sexton garryowen, a feat which raised the rafters at Aviva Stadium.

Ireland were unable to score points from the resultant field position, however, they began to play with more confidence.

Priestland’s influence waned from then on.

An ugly barge on Bowe by Phillips saw Ireland given another penalty chance but Sexton’s action turned snatchy at just the wrong moment and he pushed the attempt to the right and wide.

Jamie Heaslip led the next foray into the Welsh 22, carrying with intent after a Rory Best offload.

But the chance to score points slipped away when Cian Healy dropped the ball forward on the charge straight after.

But Ireland were having most of the play and they finally found a way through towards the end of the half, when Bowe got behind inexperienced Wales wing Alex Cuthbert and found his fellow Ulsterman Best, who went over untouched.

Sexton added the extras to give Ireland a 10-5 lead at half-time.

Wales were weakened when openside and captain Sam Warburton had to be replaced for the second half.

They also brought James Hook in to add width and dash outside the centres – a shift of emphasis that paid dividends over the ensuing 40 minutes.

Again, Ireland got the early momentum in the half and they generated a quick penalty chance from a scrum. Sexton put over his third kick of the day to keep the scoreboard ticking along.

But, attacking from touchline to touchline, Wales continued to stretch Ireland and the penalty calls in their favour began to come with some regularity.

The first saw Priestland miss with a decidedly awkward effort, but Halfpenny took over then and he made no mistake with the next, scoring from distance to keep his side in touch.

A catching error by Bowe, who spilled a tricky catch as the ball sailed over his head, gave Wales the ball again.

From that lineout, a shocking defensive lapse on the edge of the midfield defence – shades of Wellington – gifted Wales a try from nothing.

This time, Fergus McFadden was at fault as he allowed the giant wing George North to smash through his tackle and feed Davies, who had another easy run in.

France will take a keen interest in the midfield if Ireland decide to stick with lightweight centres next week.

To their credit, Ireland almost answered back straight away but Paul O’Connell couldn’t quite make a pass to keep a flowing move going inside the Welsh 22.

During the ensuing period of pressure, Wales conceded a penalty on their own line to give Sexton a chance to reclaim the lead. With his reputation as a kicker – if not quite his future in the Ireland 10 jersey – on the line, he split the sticks to make it 16-15.

A thrilling final quarter looked in prospect but – not for the first time - a controversial dismissal cost Wales at a key moment.

Somehow, despite the fact that Ryan landed on his head and the incident happened off the ball, the officals decided on a yellow card.

Waves of Irishmen dived at the line only to be repelled from close range and in the end, the much-talked-about improved finishing out wide did the job, as Sexton and Kearney each flung fine long passes from left to right to Bowe, who finished in the corner.

Sexton missed the conversion to leave the gap at a nervy six points – though it looked like it wouldn’t matter.

In fact, Ireland had another chance to extend the lead beyond a score when Wales conceded another penalty for killing the ball, this time on halfway.

That gave Sexton the chance to finally kill off Wales, but his kick was again poorly struck.

Still, the game looked up.

But nobody had told Wales and with Phillips pulling the strings, the centres combined to put North over in the corner, reducing the gap to one.

Halfpenny, who had missed a kick to put Wales into the Rugby World semi-final three months ago, stepped up.

His kick drifted agonisingly wide but – unbelievably – there was more to come as Wales went on the attack again. They marched up the pitch with ease after the restart, reaching the Irish 22.

With a drop-goal plan beginning to form in the half-backs’ minds, the referee’s decision to bin Ferris handed Halfpenny another shot at redemption.

From in front of the posts, he took it and with a minute left, Ireland were unable to claim the restart.

Wales will march on dreaming of a Grand Slam, with France set to visit Cardiff on the final day and England looking eminently beatable after their narrow win in Edinburgh.

For Ireland, a daunting trip to Paris is up next. 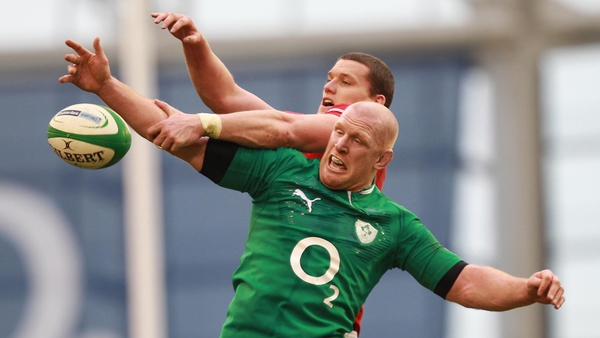