Ulster’s impressive win away to Montpellier last week in the Heineken Cup was the surest signal so far this season that they are genuine title contenders in that tournament, and by proxy, also the PRO12.

Head coach Mark Anscombe has decided to make changes following last week’s victory, bringing in Stuart Olding for a first appearance, while Mike McCormish comes in on the bench for Iain Henderson, who is out with a toe injury.

Callum Black also comes into the side in place of Tom Court at No 1, but the majority of the side is unchanged as the Ulstermen look to continue their fine form from last week.

Ulster’s ability to outmuscle up front, spread wide quickly from halfback, and hit the right lines of running in the back three has proved spot-on of late, and when those three elements are combined, they are very hard to stop.

Jared Payne, Darren Cave, Andrew Trimble and Tommy Bowe linked up sublimely against Montpellier – for Ulster’s first try especially – with French-like flair. Their understanding of each other’s games and lines of running are clicking at present, and the quartet are proving dangerous from set play runs and broken play alike.

What impressed about the Welsh team last week was their tenacity and doggedness.

They stuck at the task and won the game with a try late on, using their strength and technique to dominate Toulon in the pack, and then expose a soft centre. Cardiff then executed a shut-out defensive blanket which could be looked on as a template of how to defend a 22-metre area.

Gethin Jenkins at No 1 is a key figure for Cardiff in setting the scrum, while Sam Warburton at No 7 will be charged with digging the ball out and giving his halfbacks better possession than Ulster’s. But, with Robbie Diack, Chris Henry and Roger Wilson all in fine form, Warburton will have a hard time doing that.

In the backline, fullback Leigh Halfpenny is the danger man and he is the man Ulster must stop. Nineteen-year-old Olding could not face a tougher opponent in his first outing.

However, he will be shepherded along by the experience alongside him. Cut out Halfpenny’s threat and Ulster will go a long way towards victory.

Cardiff had only 46% possession and 48% territory last week, but they accumulated 90 tackles to fend off Toulon’s attacks, and crucially had four line breaks, which made the difference in scoring the game’s sole try.

Ulster by contrast had the lion’s share of the possession against Montpellier last week with 59% and 61% territory, and made a similar number of line breaks – five.

Expect a similar game this week, Ulster dominating possession and bossing the game, but Cardiff defending stoutly and attempting to use their possession wisely and with a touch of the unexpected.

Fatigue could well be a factor in this one for both sides, but it may just affect Cardiff more given the draining nature of their clash with Toulon.

Verdict: Ulster to win by nine. 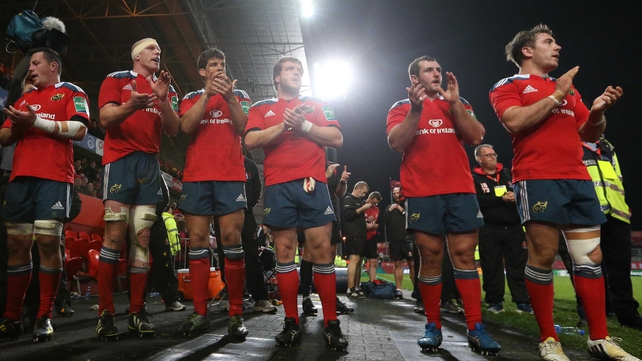 Following a do-or-die match against Gloucester last weekend, Munster face another hugely challenging tie this weekend in the form of Glasgow Warriors.

The Scottish side lie top of the PRO12 table with five wins on the trot and look a team that can challenge to win the title outright this season – which would be some achievement given that a Scottish team has never won the tournament in 12 attempts.

Rob Penney’s side welcome back strong names to the starting XV in the form of Andrew Conway and CJ Stander, while JJ Hanrahan steps in for Ian Keatley at flyhalf.

The worry for Munster in the backline is fire-power this week. With Felix Jones and Simon Zebo both out injured, Penney’s men are missing their two flair players in the back three. Much of the responsibility now falls to Keith Earls to deliver sparks of genius from the centre, if he stands up and performs then the space and width needed to score tries will come.

Stander comes into a No 5-8 set up that is supremely strong and the best section of Munster’s team, with Paul O’Connell and Peter O’Mahony leading the team by example.

The front row this week is entirely changed from last week with James Cronin, Mike Sherry and Stephen Archer being named from 1-3. And here could be a weak fissure for Munster, as they face Ryan Grant, Pat MacArthur and Moray Low; if Munser lose this battle, they are instantly on the back foot against a team full of confidence. It could be the key area on Friday.

Out back, Glasgow have threats at ten in Duncan Weir, 12 with Sean Lamont and former Ulster winger Tommy Seymour at 14.

While on the left wing, DTH van der Merwe is a lethal finisher. The Canada international is Glasgow’s all-time top try scorer and must be watched like a hawk lest his pace is unleashed.

Munster got their victory over Gloucester in the Heineken Cup last week, and with it two tries, but was that adequate return? With 60% of the possession, 60% of the territory, and 97 rucks and mauls won compared to Gloucester’s 56, surely Munster should have won by more and secured a bonus-point?

While Gloucester did have a fine tackle success rate of 92%, Munster should have lowered that ratio. Why didn't they? They could only manage two line breaks all day and beat 11 defenders, one less than Gloucester.

They will likely need to do the same and more against Glasgow to secure a win.

Verdict: Glasgow to win by four.