Northampton Saints have announced that JJ Hanrahan will be joining them from Munster next season.

Speculation had grown since last month that outhalf Hanrahan was considering a move away from Munster after failing to nail down a starting spot under new head coach Anthony Foley.

A recent run at centre had raised hopes his services might be retained, however the player confirmed his departure to team management yesterday despite being offered a three-year Munster deal.

Hanrahan said that representing Munster had been a "great privilege" but that he was excited at the prospect of a move abroad.

“I have had nothing but positive experiences at Munster," he said. "It is my home club and running out in the red jersey has been and remains a great privilege.

"The coaching staff, from the Academy through to the senior coaches, have been brilliant with me since I entered the Academy.

"I remain fully committed to the Munster cause in the Pro 12 and the European Champions Cup for the remainder of the season.”

"I have thought long and hard about this decision, and as difficult as it is to leave I believe it is the right step to take for my future progression.

"Growing up, Munster was all I knew and I will certainly miss it. I am very fortunate to have represented this club and team but I need to do what is best for me and avail of the next opportunity.

“I’m excited by the challenge that awaits me at Northampton Saints and I hope that I can help continue the club's recent successes in England and to challenge for European honours,” he told Northampton's website.

Northampton are the reigning Premiership champions and currently top pool 5 in the Champions Cup.

The news comes on the same day that Munster announced four re-signings, including that of outhalf Ian Keatley.

Kerryman Hanrahan has made 51 appearances for the province, scoring 229 points, and at 22 years of age has been a rising star since first making his league debut against Newport Gwent Dragons in September 2012 in Thomond Park.

A former Castleisland RFC, Rockwell College and UL Bohemians man, he moved to the senior squad at the start of the 2012/13 season after completing two years of the academy programme.  In June 2012 he played an impressive role at out-half for the Ireland Under 20 side that finished fifth in the Junior World Championship in South Africa and was one of three players nominated for the IRB Junior Player of the Year.

He made his European debut against Edinburgh in October 2012 in Thomond Park, and five days later scored two tries when making his first league start against Zebre in a man-of-the-match performance.

The youngest member of the squad, he was awarded the Munster Rugby Young Player of the Year award for 2013/2014, and also won the Golden Boot at the 2014 PRO12 awards.

In June he represented Emerging Ireland in the IRB Nations Cup in Romania.

Munster Rugby CEO Garrett Fitzgerald said, "In confirming the positive news about player contracts earlier today we are extremely disappointed to announce that we will lose the services of a home-grown talent such as JJ.

"We understand his reasons for leaving at the end of the season and appreciate the opportunity available to him.

"We have done everything possible in looking to retain such a skilful player and offered a highly competitive package in the process but unfortunately the decision is out of our hands.  We would like to wish JJ all the best, he is a talented player with a very bright future ahead of him.”

Saints director of rugby Jim Mallinder is excited by the signing.

“JJ is a tremendous prospect,” he said. “He has consistently shown that he has the ability to compete at the highest level of club rugby.

“But while we are looking forward to having JJ join us in the summer we are particularly excited about seeing him develop over the coming years at Franklin’s Gardens.” 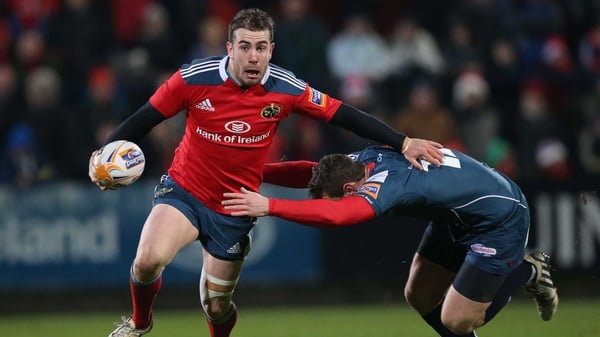 Anthony Foley: Munster will do 'level best' to keep Hanrahan