Leinster won the Amlin Challenge Cup to ease the blow of losing their status of European champions - and they did it in style.

Joe Schmidt's men destroyed Stade Francais, 34-13, at the RDS, running in tries from Ian Madigan, Sean Cronin and Rob Kearney to take a commanding 21-6 lead at the interval.

Cian Healy came off the bench to score the fourth and Jonathan Sexton kicked 14 points as Leinster claimed the first half of a potential trophy double, with the RaboDirect PRO12 final to come against Ulster next week.

Leinster tonight hold both continental titles simultaneously, although they do so for fewer than 24 hours. Leinster went into their final without a talismanic leader but, unlike Chelsea's John Terry, Brian O'Driscoll kept his decorum and did not pull on his blue kit for the trophy presentation.

O'Driscoll was sidelined by a back spasm and his battle for fitness is sure to be a theme that runs through the Irish Lions tour of Australia.

Leinster were still able to field four Lions in Kearney, Sexton, Sean O'Brien and captain Jamie Heaslip, with Healy coming off the bench.

All made their mark, which will have pleased Warren Gatland.

Heineken Cup champions in three of the last four years, Leinster had dropped into the second tier competition after finishing behind Clermont in their pool.

But Schmidt's side remain one of the most formidable teams in Europe and proved as much tonight with a brilliantly clinical performance in attack and defiant defensive display.

Leinster took just three minutes to hit their stride with a break from Fijian wing Ica Nacewa and Sexton sent Madigan over for the opening try. That sparked a breathless first half in which Leinster twice repelled Stade Francais, with fly-half Jules Plisson tackled into touch before O'Brien and Sexton combined brilliantly to deny centre Paul Williams as he stretched for the line.

Sergio Parisse was in inspirational form for Stade but Leinster withstood the French barrage and hit back in devastating fashion, with Andrew Conway rising above Julien Dupuy to collect a high ball from Isaac Boss before sending Cronin over for the try. Nacewa fielded Sexton's inch-perfect cross-kick and then slipped a pass out of the tackle for Kearney to dive over.

Porical landed a long-distance penalty just before the interval but that was rubbed out when Sexton struck two of his own in the second half to extend Leinster's lead.

Stade worked a consolation try for wing Jeremy Sinzelle, who drove his way through Kearney and Fergus McFadden, who was injured in the process, to score in the corner.Kearney, who had taken the opportunity to lay down a marker for the Lions full-back jersey, came within inches of scoring his second but he was just tackled into touch by Sinzelle as he reached for the line.

But Leinster were irrepressible and Healy drove over from close range and Sexton's conversion - his sixth successful kick from six attempts - rounded off an emphatic victory. 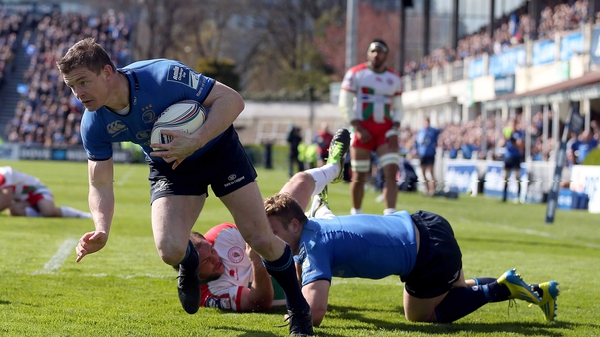