In the first period of extra-time, the wily winger finished off a flowing counter attack for the match-winning score, with Peter O'Mahony, captain Evan Ryan and influential out-half Jeremy Manning featuring in the build-up.

St. Mary's dominated possession and territory in the opening half of normal time but were 3-0 behind at half-time, courtesy of a Manning penalty.

The Munster-contracted Manning then scrambled over for a well-taken try, but St. Mary's full-back Gavin Dunne, who kicked an earlier penalty, levelled the game at 10-10 and ensured extra-time by converting Shaun McCarthy's last-gasp score.

McCarthy's try, in the eighth minute of injury-time, looked to have been a crucial turning point. But Cork Con, with their strength and conditioning work coming to the fore, had the better of the two periods of extra-time and Healy danced through for the all-important try.

The table toppers were without the Munster-tied Scott Deasy, Tom Gleeson and Billy Holland, but Manning got clearance to play at half-back alongside Duncan Williams, who has secured a senior contract with Munster.

Hoping to end the club's ten-year wait for their second league title, St. Mary's made one change to the team that saw off Old Belvedere at the semi-final stage. Stephen Bradshaw started in place of Gareth Logan at half-back.

Former Connacht winger Conor McPhillips was the only player in the Saints' starting line-up with provincial experience, and he slotted in once again at scrum half alongside Australian-born player-coach Shaun McCarthy.

With the wind at their backs, Cork Con showed their intent early on when scrum half Williams tapped a kickable penalty. They flooded out to the right where full-back Darragh Lyons made a half-break, only from a subsequent knock on to take the pressure off St. Mary's.

With O'Mahony and eventual man-of-the-match Frank Cogan giving the Dubliners little time to breathe at the breakdown, St. Mary's captain Hugh Hogan was pinged for holding onto possession and Manning swept a right-sided kick through the posts for a fifth minute lead.

St. Mary's built through the phases with top try scorer Robin Copeland, Darragh Fanning and Stephen Grissing getting ball in hand. Healy was penalised for a ruck offence and while the men in blue set up an inviting lineout, the attack petered out.

They did win a penalty which Dunne stepped up to take. The Corkman's effort looked like it might have snuck inside the right-hand post - television replays certainly suggested so - but the assistant referees' flags stayed down.

Cork Con's lineout malfunctioned and they lost a series of balls as St. Mary's began to get a grip on possession, albeit without troubling the try-line.

Constitution's committed and disciplined defence was a key feature of their AIB Cup final win over Garryowen at this venue in January, and they were razor sharp again in that sector here.

Space was at a premium as Fanning and Cork Con centre Simon Zebo were quickly closed down in successive phases and conceded penalties on the deck.

A clever kick downfield by Manning, off a quick turnover, forced Dunne into conceding a lineout. Healy took it quickly and Brian Walsh's charges won a close range 22nd minute penalty which Manning pushed to the right and wide.

St. Mary's were making little headway as they continued to boss possession. They could have had a morale-boosting finish to the first half when McCarthy and Mark Sexton combined for a half-break. Referee Alain Rolland spotted hands in the ruck, but Dunne was off target with the penalty attempt.

Peter Smyth's men did draw level early in the second half, courtesy of a successful Dunne kick, and the momentum was with the Dublin side as Manning failed to convert a penalty won by some hard graft from Zebo.

In the 50th minute though, Manning snuck through for a well carved out try. The New Zealander, who kicked 18 points in Constitution's 2008 league final win, slipped out of an attempted tackle from McPhillips and scrambled over the line past the covering Fanning.

Winger Richie Lane tapped over the conversion and there was, at last, some distance between the sides at 10-3.

St. Mary's failed to panic and they tried the direct route, with skipper Hugh Hogan, Rob Sweeney and Copeland going into contact, before timely tackles from Lyons and Healy kept Fanning and Stephen Grissing out in one-on-one situations out wide.

The underdogs kept plugging away and as both sides tired, space gradually began to open up. The start of the final quarter was lit up by fiery breaks from Cogan and Ed Leamy who saw Cork Con cover 60 metres, but Copeland showed his pace as the Saints surged back.

As Cork Con continued to soak up the pressure, Hogan and his team-mates got some reward when they gained a penalty. Trailing 10-3, touch seemed the likely option, but they decided to ask Dunne to kick them closer on the scoreboard. Unfortunately for them and their travelling support, the full-back shot wide from a left-sided position.

However, in a tense and drama-filled finale, St. Mary's got the try that their efforts had deserved. McPhillips kept willing his forwards on, they made ground towards the posts but the avenues were being sealed off time and again by Constitution's gritty defence.

Their one slip-up was punished as just when they were sucked in close to the posts, St. Mary's spun the ball to the left where out-half McCarthy linked with replacement Logan before reaching for the try-line ahead of Constitution hooker Robert Quinn.

The St. Mary's fans erupted and Dunne, steadying himself after three earlier misses, coolly slotted the conversion to send the league final into extra-time for the second successive year.

They needed try countback to separate Shannon and Clontarf twelve months ago at Thomond Park, but this particular Leinster v Munster affair did not need such a measure.

With the players understandably tiring after a strength-sapping 80 minutes, the game was there for the taking and Cork Con showed the greater hunger and will to win in extra-time.

A bustling run down the right touchline by number 8 Cogan saw him blast past Fanning and replacement hooker Gavin Hickie, only to run out of space with Quinn on his shoulder.

St. Mary's continued to play more of the rugby, with Cork Con content to defend and pick off their chances when they came. They struck the knockout blow as the first period of extra-time came to a close.

Dunne had his kick blocked down in midfield by O'Mahony and Williams, the ball was swept through the hands as Cork Con broke down the left. The excellent Evan Ryan shipped it on to Manning who passed for Healy to come in on an angle, beat Fanning's tackle and outstrip the cover to gleefully touch down behind the posts.

It was a terrific try out of nothing, but showed the danger that the Cork Con backs pose - even from the halfway line. Manning added the conversion for 17-10 lead and there was no way back for St. Mary's.

They needed a spark of brilliance or a huge collective effort from the pack to hit back with a try. It did not come and Lane almost engineered a third try in the dying minutes, collecting his own grubber kick just metres from the Saints line.

Replacement Cormac Quinn put in a try-saving tackle to deny him, but the damage had been done as Cork Con were left to celebrate their second AIB League success in three years and fourth in all (1991, 1999, 2008 and 2010). 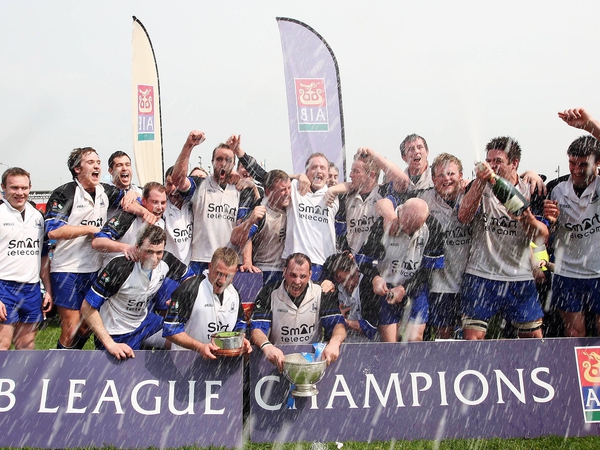