If Jack O'Donoghue knows something about Munster’s coaching set-up for next season, he’s not letting on.

Current forwards coach Graham Rowntree will take over the head coach role from Johann van Graan when the season ends but with JP Ferreira and Stephen Larkham also on the way out, there are more backroom roles to be filled.

Mike Prendergast, the former Munster scrum-half currently the attack coach at Racing 92, has been linked with a move home, while Denis Leamy’s name is also doing the rounds.

A Grand Slam winner with Ireland and a two-time Heineken Cup winner with the Reds, the former number 8 is currently the contact skills coach with rivals Leinster.

Previously, the 40-year-old worked in the Munster set-up and it’s understood that he is high on their list for next year’s coaching ticket.

"I would have worked under him there with Munster 'A’s," O’Donoghue tells RTÉ Sport.

"He was an incredible player for both Munster and Ireland and certainly someone I would have looked up to as a number 8.

"To work with him with the ‘A’s was incredible because of the type of person he is, a friendly giant but he can certainly give it to you at the same time when you’ve gone wrong.

"Yeah, look, I’ve seen his name been thrown around.

"I haven’t a clue if he’s coming in or not but I know he’s doing a really good job up at Leinster at the moment so we’ll just have to wait and see what happens.

"There’s that bit of excitement wondering about who is going to come in and you hear a few names thrown around but you can’t look that far ahead."

O’Donoghue starts at number 8 this evening for Munster’s URC clash against Cardiff in Cork, but Toulouse loom large on the horizon.

The 2006 and 2008 winners take on the holders in the quarter-final next Saturday at the Aviva Stadium in Dublin.

Munster have come unstuck in the knock-out stages over the last few seasons, rarely getting close to their opponents in underwhelming losses to Racing 92, Saracens and Leinster in big matches.

O’Donoghue believes they are better placed this time around to land some more blows.

"But the work we are doing with Caroline [Currid, sports psychologist] around that mental [side], not letting the pressure of a big occasion get to you is something that’s new to us this season and we’ll have in our back pocket.

"And knock-out rugby and the quarter-finals will be the first test of that."

Jack O'Donoghue was speaking ahead of the 2021/22 Heineken Champions Cup quarter final between Munster and Stade Toulousain on Saturday, 7 May. This year's tournament marks the 27th consecutive season Heineken® has been a proud partner of European rugby, and the fifth season of the Heineken® and Rugby Players Ireland partnership. 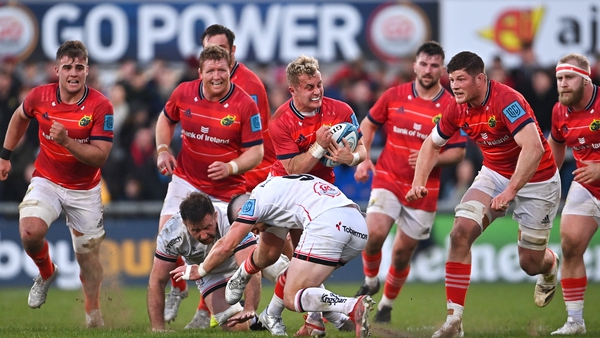