Welsh Rugby Union boss Steve Phillips says it is a "race against time" to sell out Wales' Six Nations home game against Scotland after coronavirus restrictions were eased by the Welsh Government.

Welsh First Minister Mark Drakeford announced on Friday that Wales will welcome back crowds to sporting events from 21 January.

All sporting events in Wales have been held behind closed doors since St Stephen's Day due to the rise of coronavirus cases, and there were concerns that Wayne Pivac's reigning Six Nations champions - who start the tournament against Ireland in Dublin - would play their first home game of this year's championship at an empty Principality Stadium.

The WRU had explored the option of staging home games in England in a bid to generate an income from the tournament and, although that scenario has now been removed by Friday's announcement, Phillips says the Union is playing catch-up over selling out their 74,500-capacity home in Cardiff.

"The difference a crowd makes to performance on the field is immeasurable and a number of our senior players have been very vocal about the positive impact a capacity crowd in Cardiff can make.

"The atmosphere supporters bring to Principality Stadium is unrivalled, and this news will be greatly welcomed by coaches and players.

"Having watched the Six Nations 2021 tournament without crowds, the recent update from Welsh Government is hugely encouraging.

"We all want to see capacity crowds at all three games but, because of the pandemic, we are now in a race against time to achieve what would usually come naturally; this is especially the case for the match against Scotland given its proximity.

"It's no secret that supporters have been waiting to see what would happen with restrictions, but the hugely positive news today should kick start a fresh surge for tickets."

Drakeford said there would be a "four-stage process" to lifting the current alert level two restrictions in Wales, depending on cases remaining low.

Numbers allowed to attend an outdoor event will rise from 50 to 500 immediately ahead of crowds, with no limit on those present at outdoor events, returning on 21 January.

Nightclubs can reopen and hospitality will be allowed to operate normally, although Covid passes will still be required for large events, plus cinemas, nightclubs and theatres.

Wales will return to a three-week review cycle on 10 February as the country is at alert level zero.

Drakeford, speaking at a press briefing, denied lifting the ban on spectators at professional sports events was due to the economic "pressures" of the forthcoming Six Nations tournament.

Wales have three home games in the 2022 tournament, with the Scotland opener followed by visits from France and Italy in March.

Drakeford said: "The pressure that my Cabinet respond to are the pressures that are in the data. Those are the things that lead us to take the actions that we do and not the understandable representations by people in the individual parts of Welsh society that they occupy."

EFL trio Cardiff, Newport and Swansea have all played home games behind closed doors while English rivals were allowed to host supporters.

Swansea welcomed the decision of the Welsh Government and said planning has started to ensure fans return safely for their next Sky Bet Championship home fixture against Preston on 22 January.

Newport's League Two game will go ahead on Saturday with a maximum of 500 people present although no fans will be able to attend.

"Based on previous advice from Welsh Government, the club has been preparing for tomorrow's game without spectators in attendance," said a statement on the Newport website.

"Unfortunately the announcement by Welsh Government, which allows a maximum of 500 to attend outside events, is too late for the club to put in place everything that is required to enable a safe and comfortable environment for supporters to attend the Harrogate game."

The Welsh Grand National was also held at Chepstow on 27 December without spectators, despite advance ticket sales in excess of 6,000. 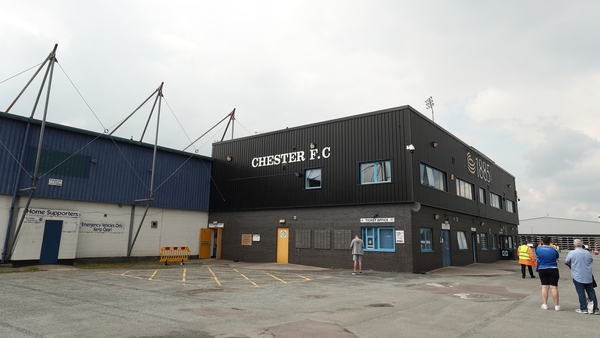