Andy Farrell declared himself satisfied with how Ireland dealt with the disruption caused by late changes as his side brought the curtain down on a successful Autumn Nations Series campaign.

Yesterday number 8 Jack Conan felt his quad tightening, which meant Tadhg Beirne going on standby to cover the back row, with Peter O'Mahony eventually taking the blind side shirt and Caelan Doris going to the back of the scrum.

And in the warm-up before Ireland’s 53-7 win over Argentina, lock Iain Henderson pulled his hamstring, meaning Beirne did get to start, but in the engine room.

Nick Timoney and Ryan Baird were added to the bench as Farrell scrambled his defences.

"Jack Conan just felt a little something in his quad yesterday and we gave him until this morning to see how he felt when he woke up," said Farrell, whose side already accounted for Japan and New Zealand earlier this month.

"We thought he would be okay but he wasn’t so at a quarter to eight this morning Nick Timoney got the call to come back down from Belfast.

'People got their opportunity today'
Andy Farrell delighted with how a new-look team performed on a day that began with Nick Timoney getting a call to join the squad #IREvARG #rterugby
📺https://t.co/CStwnXf2cB
📻https://t.co/wUq1XxhF4x
📱https://t.co/zXizaUwa8D pic.twitter.com/of0kWwhs2o

"It just shows the strength of the group that he is covering six, seven and eight and can do it seamlessly.

"For all the mix-up this morning, Tadhg Berine has come in to second row and all of a sudden he is covering six, seven and eight and he is back into second row again and he plays a match like that.

"Pete comes off the bench to play the full game and ends up captaining the side and has a stormer. The most pleasing part is the cohesion we showed as a group."

While O’Mahony declined to elaborate on the difficulty of getting late notice of a start, Farrell felt it only right to speak on his behalf.

"He'd be humble enough not to say that it's tough," he interjected.

"It is tough because he has to be across three positions and he knows them inside out.

"To give you an example of today, Tadhg Beirne is covering second row and then 6, 7, and 8 this morning.

"All of a sudden, he's back into second row and he's not called lineouts all week.

"Yet he was calling lineouts today as well today and our lineout was 100% for the first time in quite some time. It just shows that the way that these lads are coming in." 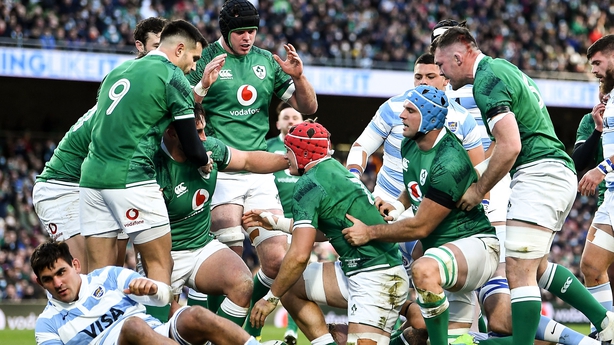 On closing the window with a perfect record, the head coach said: "The scoreline was obviously very flattering for us. I don’t know whether the first-half was so dominant but the most pleasing thing is that we grew as a group.

"Some more lads got some well-deserved game time after the controversy (sic) that we had to deal with throughout the morning and we dealt with that pretty well."

That Ireland finished off the game with a number of younger players was also a point of pride for Farrell but he wasn’t forgetting the old guard either.

"Today was the most pleasing day for me because of how we've grown as a group. Those lads thoroughly deserved their chance and it wasn't just the young lads," he said.

"You guys will focus on the young lads and that we're building nicely with a bit of depth but look at Cian Healy when he came on, look the experience of Earlsie and what he brings to the bench.

"Pete (below) has been on the bench a couple of times as well and has been exceptional when he comes on so it's a squad thing. 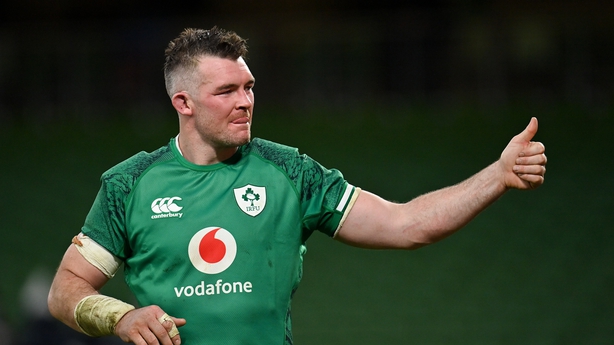 "Those lads that you talk about deserved a big block of time. I thought they were exceptional.

"The two halfbacks came on and sped the game up. It's there for all to see.

"Dan comes on and hits nine out of nine and looks such a presence with ball in hand and linespeed defensively as well, so that's great.

"Ryan Baird comes on. He wasn't playing until 8 o'clock this morning and seamlessly comes on and has a few big moments as well.

"Tom O'Toole has been around the group for a good while and he has grown massively in maturity as far as his scrummaging is concerned, first and foremost, but in and around the group just as an Irish rugby player.

"I'm so pleased for him because he has been patient enough learning his trade. It's a tough old position, tighthead, for a young kid and he was exceptional when he came on as well, nice and composed."