Every campaign, every match, every win, every loss, every selection and every substitution Andy Farrell makes for the next two years will be viewed through the prism of the World Cup.

Even if Johnny Sexton hadn't referenced it himself last week, it would be part of the rugby discourse.

Two years out from the tournament, the focus of the media and the fans always starts to narrow in on what's coming down the tracks. Even if the team and the coaches preach the here-and-now, the World Cup frames every conversation.

At this juncture in the previous World Cup cycle we thought we'd cracked it. November 2017 began with a trouncing of South Africa, sparking a 12-game winning run, a Six Nations Grand Slam, a winning tour of Australia and a home triumph against New Zealand.

The stars were aligning in November 2017; James Ryan and Jacob Stockdale were emerging as generational talents, the Paul O'Connell and Brian O'Driscoll of their era.

Bundee Aki made his debut in that 38-3 hammering of the Springboks, a naturalised midfield enforcer, a perfect compliment to the Ringrose-Henshaw axis.

Conor Murray, Peter O'Mahony, CJ Stander and Tadhg Furlong were heading towards their prime, coming off the back of a Lions tour, while Johnny Sexton was being kept honest by the heir Joey Carbery.

South Africa, meanwhile, were bottoming out. Even Rassie Erasmus would struggle to sort out that mess in two years.

"We've all got best laid plans, but I'm certainly aware that those plans can be messed up in the first five minutes of a rugby game as well," said Andy Farrell on Thursday.

You can say that again.

Japan may not have the same draw as the southern hemisphere big three - as slow ticket sales will back up - but they play just the type of rugby that can throw any best laid plans up in the air.

What they lack in gainline animals they make up for in speed and energy and smarts.

Head coach Jamie Joseph and his assistant Tony Brown have built a squad of players whose style is designed around what they have, and also what they don't have.

As hosts of the 2019 World Cup they ran Ireland off the pitch in Shizuoka, before doing the same to Scotland to prove it wasn't a fluke.

"The one in 2019 is probably one of the toughest games I've ever played," said James Ryan last week of Japan's relentless energy.

"They're probably not the biggest men in comparison to some of the teams. They kind of try to negate that through the quickness of their play and that kind of brand suits them because they are a bit smaller."

They've come a long way from the team which an inexperienced Ireland squad comfortably beat in two Tests in the summer of 2017, making the step up to World Rugby's Tier 1 status, and knocking on the door for inclusion in a reformed Rugby Championship.

Their 2019 performances are beyond what should be expected on a consistent basis in the short-term, but they're undeniably the best of the rest, and an ideal opponent to test your weaknesses - and lungs - against.

In the summer meeting between the sides in Dublin, Yu Tamura dictated some wonderful attacking rugby that had Ireland falling over themselves at times.

Tamura is back in the number 10 shirt today, while arguably their most recognisable name Kotaro Matsushima is restored to the back three. The Clermont Auvergne wing/full-back missed the recent defeat to Australia but has since linked up with the squad upon their arrival in Europe.

The legendary captain Michael Leitch appears to be phasing out of the team, as Joseph looks to the future.

Ben Gunter is the latest recruit, naturalised from Australia and playing with the Panasonic Wild Knights, the flanker made his debut against the Aussies last month and packs down in the back row alongside Lappies Labuschagne and Kazuki Himeno, the latter of which is a powerful number eight who looked destructive for the Highlanders in Super Rugby last season.

Jack Cornelson, son of former Wallaby Greg, is another fresh-faced Australian who made his Japan debut earlier this year, adding another layer to an otherwise experienced pack.

"This is a proper Test match," says Farrell.

"In the last couple of games I've seen them, their defence has certainly improved as well.

"There's a lot more aggression, line-speed and physicality in how they play.

"Their defence is now playing almost up and in, it's a pressure type of game they're playing.

It's hard to know how much to read into Farrell's team selection.

The mobility of the pack, combined with the selection of Jamison Gibson-Park above Conor Murray would imply Ireland want to match Japan pace rather than just live with it.

It might be a stretch though to suggest that this streamlined approach will be part if the Irish identity going forward. Arguably, it's a selection born out of necessity; replacements Iain Henderson and Murray both have just one game of rugby under their belts this season owing to Lions commitments. The matchday 23 next weekend will tell us a lot about Farrell's Irish vision.

While there were some questions over a "conservative" Irish selection, it's a forward pack that's exciting and young.

Tadhg Beirne, 30 in January, is the oldest starting forward in a pack that has an average age of 26.9. In Andrew Porter, Ronan Kelleher and Tadhg Furlong, Paul O'Connell and John Fogarty are working with a trio of Lions tourists, the oldest of whom - Furlong - turns 29 next week.

Dan Sheehan's inclusion on the bench for a potential debut is a slight surprise, although a welcome one.

The Leinster man has been preferred to Ulster's Rob Herring, who until now had seemed to be Farrell's first-choice hooker.

The debutant will be taking a backseat to the centurion though, as Johnny Sexton leads Ireland out for his 100th game for his country.

It's a remarkable haul considering he didn't make his debut until he was 24, forced to wait behind an iconic number 10 who wouldn't go away quietly. Sound familiar?

And while the clamour for Joey Carbery or Harry Byrne to get the start is understandable, so too is the logic behind bringing Sexton's century up this week rather than next, when the All Blacks are in town and the dial is turned up.

It's fitting that a crowd will be able to salute him onto and off of the pitch this afternoon, the first non-restricted attendance for an Ireland Test since February 2020.

It's unlikely to be a full house, but those that have bought tickets look set to be entertained, whether by Ireland or the tourists. 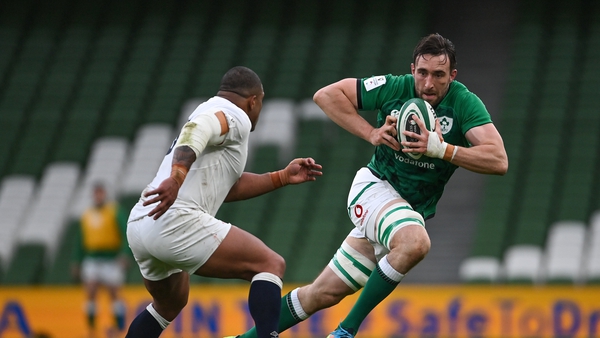