Billy Burns reckons he is on the right track to earn more game time with Ireland.

The Ulster player was second to Johnny Sexton in the out-half pecking order for the 2021 Six Nations, while Joey Carbery started both of Ireland's summer Tests when he returned to full fitness.

Burns, who has seven caps, replaced Carbery in the Japan match, while Harry Byrne was sent on for his debut against the USA.

Leinster’s Ross Byrne and Connacht’s Jack Carty, who were both omitted from last month’s 50-man training squad, also have designs on working their way back into Andy Farrell’s plans for the upcoming Tests against Japan (6 November), New Zealand (13 November) and Argentina (21 November).

Burns, 27, has started all four of Ulster’s United Rugby Championship games so far this season, helping Dan McFarland’s side rise to the top of the standings ahead of Saturday’s derby with Connacht at the Aviva. 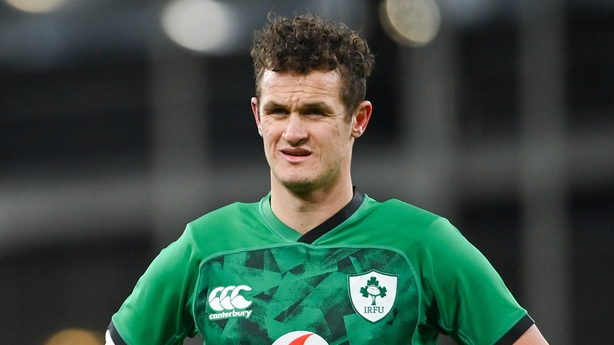 Asked whether he had spoken to Farrell about his game and how to further impress, Burns told RTÉ Sport: "We went down there a couple of weeks ago, before the season started. It was more of just a chat with the whole squad.

"I’ve known for a good while what Andy expects of me and what he wants to see in my game, both him, [attack coach] Mike Catt and Simon [Easterby] defensively.

"In terms of how I am going, I feel I am getting there slowly.

Succession planning when the ruling 10 refuses to budge

"I think it’s been good, I’ve had a good run of games albeit picking up a slight niggle [against Benetton].

"But yeah, I’ve plenty of room to improve - just general management of the game, play into space early and also the kicking game as well. In international rugby that’s hugely important so probably those main areas.

"It’s something I’m working on hard here. It goes hand in hand with how we want to play here as well in some ways.

"I’m trying to keep on improving."