A stonewall defence and the laser boot of Melvyn Jaminet saw France close out a series-levelling 28-26 win against Australia in Melbourne on Tuesday and savour their first away win over the Wallabies in 31 years.

Full-back Jaminet slotted seven penalties and converted a Damian Penaud try in the first half for a 23-point game as France turned the tables at the Rectangular Stadium after suffering a last-gasp 23-21 defeat in Brisbane last week.

It was Les Bleus' first win Down Under since upsetting the Bob Dwyer-coached Wallabies 28-19 at Sydney Football Stadium in 1990 and came despite a slew of their first-choice players forced to miss the tour due to the Top 14 final.

Australia led by a point with three minutes on the clock after a late penalty by flyhalf Noah Lolesio, but France won a scrum penalty at midfield allowing Jaminet to coolly slot the winner from directly in front of the posts, leaving most in the Covid-19-capped crowd of 20,114 in dismay. 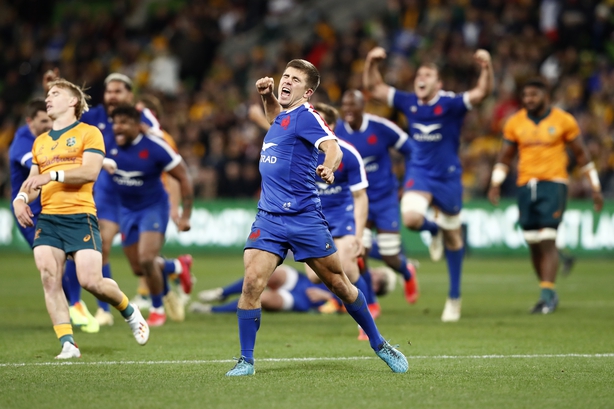 Australia had a first-half try from Jake Gordon and another from indefatigable captain Michael Hooper in the 71st minute but squandered a number of promising attacks with basic skill errors.

A thrilling try from Fijian winger Marika Koroibete in the opening 10 minutes was cancelled on review after winger Tom Wright was found to have knocked on trying to mop up a clearing French kick in the leadup.

France were far more clinical, with Jaminet scoring in the first minute with a 48-metre penalty after a ruck turnover.

Full-back Tom Banks killed another promising Wallabies move with a pass meant for Koroibete sailing over the touchline as he streamed down the left wing unguarded.

France capitalised on another Wallabies turnover, with winger Penaud cantering through a defensive hole on the right wing to cross for the first try in the 22nd minute.

Jaminet knocked over another penalty to put France on 16-6 seven minutes from halftime before Australia's perseverance finally paid off after bashing away at the try-line.

From the back of a ruck, prop Taniela Tupou flung a neat pass wide to Gordon who bounded over from two metres out, with Lolesio curling in the conversion from the touchline.

That kept the Wallabies in touch at the break but Jaminet's boot took the game away to leave the French celebrating a rare win on Australian soil.