Ireland will face a challenging start to the 2022 Six Nations, with champions Wales visiting Dublin on the opening weekend followed by a trip to Paris a week later.

Tournament organisers have released the fixture schedule for next year's competition, which will begin on 5 February and conclude on 19 March.

Wales will begin their title defence in Dublin on the opening weekend, and a week later, Andy Farrell’s travel to Paris to take on a French side that finished as runners-up in this year’s competition. 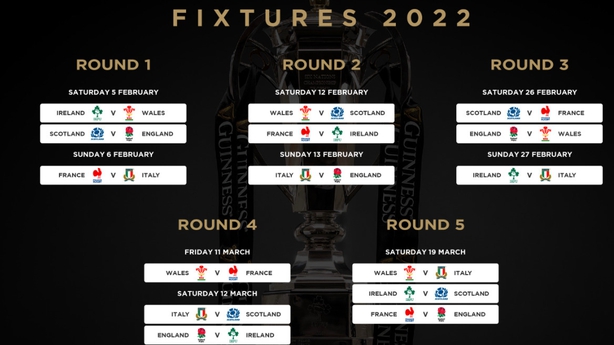 The visit of Italy to Dublin in round three is sandwiched by rest weeks, with Twickenham the destination for the penultimate weekend of action when England host the men in green.

Round four will also see the only Friday night fixture when France travel to Cardiff.

The tournament concludes on 'Super Saturday’ when Ireland take on Scotland at the Aviva Stadium. On the same day Wales host Italy while France will have home advantage against England.

"We look forward to next year's Championship with hopefully a return to normality when we can welcome fans back in stadia and bring that unrivalled Six Nations atmosphere into sitting rooms, pubs and rugby clubs all over the world," Six Nations CEO Ben Morel said in a statement.