The Irish women's team were given an unfortunate dose of reality, losing 56-15 to France after starting the competition on such a high against Wales the week before.

Sport can be incredibly frustrating, one week you think you’ve turned a corner and you’re riding the crest of a wave. The next week it seems like everything has fallen apart after just one tough result. As a player, a head coach or even supporters, where do you go from there?

It’s important to keep an even keel when a result like this happens. Nobody has become a poor player overnight, and the team have still taken some strides forward, but how far forward will be dependent on the next result, as Adam Griggs discussed with the media afterwards. 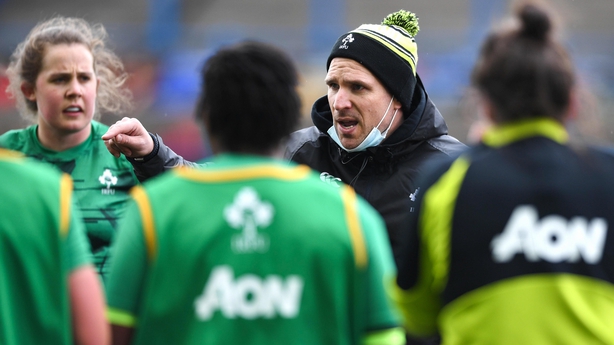 From Griggs’ point of view as the head coach, it’s sometimes hard to get away from a really negative mindset following a loss but ultimately the head coach is tasked with setting the atmosphere from the minute the final whistle goes, until you can hand the reins back to the players at an appropriate time during training the following week. The first debrief after the game will set the tone for the entire squad in terms of their reaction to the result.

Players, the squad and even the wider group are vulnerable at that moment. Sometimes you need that vulnerability, particularly if a team has lost focus and had gotten ahead of themselves but that’s not the case here.

The vulnerability that you face as a player or a coach after a defeat has the ability to dictate as much as your demeanour in the conversations you have up until the point where you get to put that jersey back on. For some, that will be a longer period of time than others, depending on how selections go on the back of a loss.

The coaches will need to analyse the game with closer inspection but it’s imperative that you don’t approach your analysis with a finer comb just because of one result. During a defeat there are going to be more errors, so naturally it takes longer to look through and code.

There are more talking points. However, it’s very easy to keep looking deeper and deeper when you don’t need to analyse every mistake. Some of the mistakes follow no trend. There’s no pattern to follow for training for the following week that will impact on the team. The coaches will be trying to find the most influential aspects of the game and the most efficacious training plan for the week to come.

One of those might be how the outside backs look after the ball in the wider channels. The two-try scoring superstars, Considine and Parsons, were both stripped of the ball in contact and the defensive transition wasn’t good enough from the rest of the team.

Maybe Griggs and his management group will look at one or two ten-minute blocks of contact including ball and body position. There’s the potential to train for some transition too and see how the team can better organise in times of scramble defence. You don’t always train for the best outcomes, sometimes you have to train the negative outcomes to see how the team can stop that rot.

The coaches are tasked with those work ons and finding the balance between the positive and the negative without going through the whole game in slow motion. But they’ll have to be conscious of the playing group too and the mental aspect of how to deal with them.

There’s more to it than just the tangible, playing actions. They will be conscious of the mentality of the group and reading the signs to see how the girls will bounce back from session to session until they can put their jerseys on this weekend.

The players will take a different approach. It normally begins with a long hard look in the mirror and too much introspection. Players take defeats quite poorly, particularly when it’s a heavy defeat after hopes were high or if they made a few errors themselves.

You’ll always have times where you feel you escaped any major fault and just didn’t find yourself in the game where others were making mistakes around you. However, normally you shoulder a lot of the blame, even when there was nothing you could have done about it.

Ireland weren’t afforded the same space and defensively there were errors but mainly forced by the pace and offloading game of the French. There weren’t as many gaps to run in to and the physical contact was kicked up a notch.

As a player you almost feel like you’ve lost your talent, but a lot of this was due to the opposition, who left a friendly reminder that there’s a difference between semi-professional and amateur. You can’t have a situation where players go into their shell because that’s the natural reaction. They’ll feel a sense of shame and embarrassment, even when it’s not warranted.

As a person, you can lose all confidence even in the most regular of conversations, looking at the floor and opting against some of the messing that you’d normally partake in. Of course, there are different characters and personalities within the group, and it’ll be the role of the louder extroverts to bring the group back together. I was one that would stare at the floor and desperately wait for the next match to happen so I could forget the parts that I was longing to replay.

The only way to deal with the loss is through honesty within the group and tangible actions. What can you do to change your fortunes? Specialist positions need to get back to their extra sessions, but you’d like to see everyone getting back on the pitch ten minutes earlier to throw a few passes, discuss a few problem areas and generally bring the flow back to the game.

As a kicker, your tendency is to keep kicking and kicking until you can fix something, but you have to find the balance here too. Overloading yourself on the week after a loss isn’t the way to go, particularly when you’re trying to bring fresh legs into the next weekend.

Ireland will be away to Italy this weekend, in the final game of an amended Women's Six Nations tournament. Thankfully, there’s another opportunity just one week later to right some of the wrongs and put their learnings into practice. It will be tough, but everyone involved will be looking forward to the challenge of the week ahead.