Live blog on RTÉ Sport Online and the RTÉ News app from 1.45pm.

Live coverage on RTÉ2 and RTÉ Player from 1.45pm, highlights on Against the Head, RTÉ2, Monday 8.15pm.

Dry with hazy sunshine developing again in the morning but cloud will thicken during the day. Highest temperatures of 11 or 12 degrees in light to moderate southerly winds. More here. 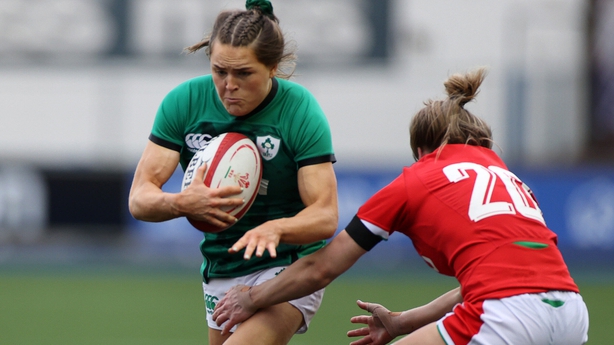 Ireland host France in Donnybrook in their second Pool B game of the re-formatted Women's Six Nations.

The winner will meet England in the play-off final next weekend and the loser plays Scotland or Italy, who play in Scotstoun at 5pm this afternoon.

The visitors have won 10 of 13 Six Nations encounters against Ireland, whose last success over the French came in 2017.

Last year's game, which had been rescheduled due to the initial coronavirus shutdown, was cancelled when the French camp was hit with a Covid-19 outbreak in October.

This fixture had also been under threat due to France being placed on a list of countries from where visitors must book into mandatory hotel quarantine but an exemption for elite athletes was secured on Wednesday.

Adam Griggs’ side had all the ready-made excuses they needed had things panned out differently against Wales last week.

First game in six months, three uncapped players in the squad, playing a team that had a match under their belts the week before.

Any one or all of them would have been trotted out if needed.

But, of course, they were all made null and void by the performance of Griggs’ side.

Teams can easily be over-trained and undercooked so it must have given the New Zealander immense satisfaction to see all that hard work bear fruit.

The result of the game was beyond doubt by the 18th minute, at which point Eimear Considine slalomed over for try number four.

In all, Ireland ran in seven tries for a 45-0 win in Cardiff. The week before, France ran in eight tries against the Welsh in a 53-0 victory. That points difference means a draw today will see Les Bleues top the pool.

We can’t move too far away from the fact that Wales were dreadful and some of their tackling was pathetic. None of that is Ireland’s fault but the step-up to the visit of France will be noticeable.

"They are really going to test us on set-piece, their back three are world class. They will probably bring a lot more of a kicking game so we’re not getting ahead of ourselves."

Griggs has stuck with the same XV that accounted for the Welsh, but has drafted Sevens star Amee-Leigh Murphy Crowe onto the bench.

She, alongside, Emma Hooban are in line for their first senior caps.

France manager Annick Hayraud has made eight changes to the side from two weeks ago, with five of those in the backs.

Her pack is the only side in the competition to boast a 100% lineout return, while the team has a 92% tackle success rate. 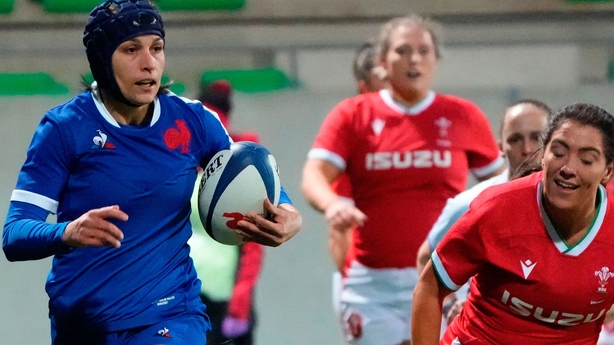 Caroline Boujard [above], who scored a 12-minute hat-trick of tries against Wales, retains her place on the wing.

The 2018 champions have named a strong bench, too, with centre Gabrielle Venier, player of the match against Wales, held in reserve.

Adam Griggs (Ireland): "We have to stay focused on improving our own game with each performance so to play the fourth-ranked team in the world will give us a great indication of where we are currently at."

Annick Hayraud (France): "For Wales, we only had four training sessions while to prepare for Ireland, we will have more than ten sessions. We were able to go further in the details and on some trainings go [further] into the [squad] to see what we are able to do."