It was Leinster's first league defeat since April 2019.

Connacht's first win against the hosts in Dublin since 2002.

The Westerners' surprise 34-25 victory over previously unbeaten Leinster last night was the stuff of dreams, and out-half Jack Carty, who scored two tries and 25 points overall, revelled in it.

"Overall, it was a fantastic team performance," the Ireland international told eir sport.

"Quin (Roux, captain) and the forwards laid down a serious founndation for us and we just played in the correct areas of the field.

"They're the best team in Europe so it's always great to come up here and put in a performance like that.

"Coming up here we had nothing to lose. We lost a few bodies early on in the week so it became an even bigger challenge.

"There was definitely something special in the air tonight. We gave a really good account of ourselves."

Connacht had led Ulster at half-time in the Sportsground a week earlier but were dominated in the second period.

Carty says they were determined not to let the same thing happen again, having built up a 25-5 advantage at the RDS.

"It's been disappointing the last three weeks, we've been right in it at half-time and disappointed ourselves with our second-half performance," he said.

"In the second half it was looking like it was going there a bit but we hung on in there and weathered the storm and then we got a really good performance.

"We've been close here three out of the last four years and the wheels came off the cart towards the end but I'm absolutely delighted." 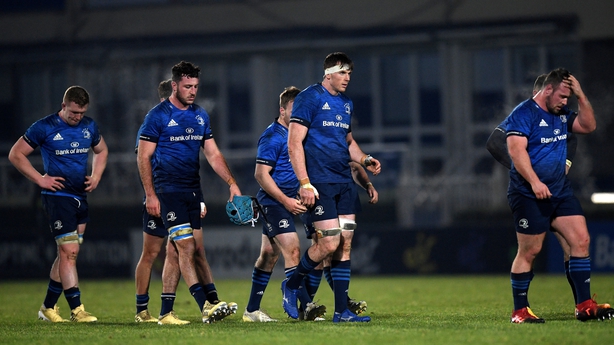 Leinster back row Dan Leavy said: "They were the better team 100%. They showed serious fight and serious desire, that we were lacking. They just wanted it more.

"We started slowly. Connacht got a really good foothold in the game early on.

"We showed in the second half that we had the tools to break them down, it's just disappointing that they got such a leg up in the first half and we had to dig ourselves out of a hole.

"It's a tough one to take but we'll learn from it. We have a game against a very strong Ulster team next Friday and we have to be much better."