The lawyer leading an action on behalf of players suffering from early onset dementia has warned of an "epidemic" in brain disease among retired professionals without serious reform of the game.

Richard Boardman, who is representing a group of seven players including 2003 England World Cup winner Steve Thompson, said doing nothing is not an option for the rugby authorities.

He said: "We believe up to 50% of former professional rugby players could end up with neurological complications in retirement.

"That's an epidemic, and whether you believe the governing bodies and World Rugby are liable or not, something has to be done to improve the game going forward."

A World Rugby spokesperson said: "While not commenting on speculation, World Rugby has the utmost respect for the wellbeing of all players, including our former players.

"We are unwavering in our commitment to evidence-based injury prevention strategies, and the priority area of concussion education, management and prevention, and act based on the latest available research, evidence and knowledge."

Boardman said the initial group could increase to 10 or 11 former players in total later this week or early next week.

Boardman says he is working with a group of 110 ex-players overall, ranging in age from their 20s to their 50s. 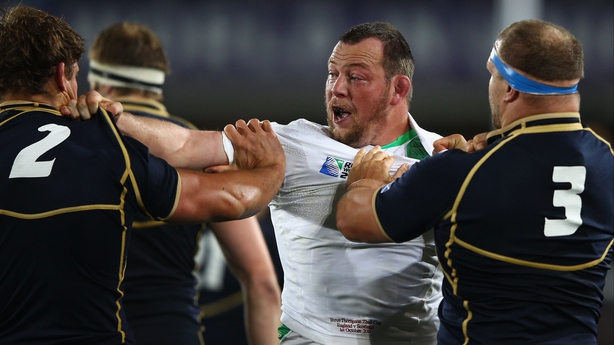 Concussion and sport - What is CTE?

The individual claims of the smaller group are heard first before an application can be made for a larger group litigation order.

"We're sending the letter before action to the other side later this week or early next week and then quite rightly they will have a chance to go away for a number of months and reply," he said.

"It's worth emphasising that this is just the opening salvo of the action - there's a very long way to go, nothing has been resolved, we've not even engaged in opening conversations yet with the other side."

As part of the action, the players involved are supporting a list of 15 'commandments' for the sport to adopt to make it safer, and insist it is not just about financial compensation.

However, the NFL in the United States settled a class action lawsuit with players suffering from neurological conditions worth $765 million, and Boardman expected each claim in the rugby action to be substantial.

"We've got a lot of guys in their early 40s with early onset dementia, and by the time they get into their 50s a lot of them will be unable to work and will require a lot of healthcare," he said.

"So the quantum for such claims will be considerable, certainly in the seven figures."

Boardman insisted the reform proposals would not change rugby as a spectacle if implemented and said: "Every guy involved in this action loves the game, and they love the physicality of it.

"The caveat to that is, since 1995 when the game went professional, the size of the guys has increased, the power, the strength, the pace of the game and therefore the collisions have increased.

"I certainly think potentially there are things within a game that could change. If you think of the 2019 World Cup final when the 'bomb squad' - six 18-stone South Africans - came off the bench in the second half, that just means that the days of the 15-stone Jeff Probyn have gone."

One of the commandments called for players' unions to be more independent, with Boardman saying it was a "conflict of interest" that over 90% of the Rugby Players' Association's funding came from the RFU.

"How can a players' union receive 90% of its funding from the employer/organisation that it negotiates with?" he said.

"If you take that as a starting point and say 'that doesn't happen with any (other) trade union anywhere in the world in any industry', then clearly there's considerable conflict of interest there.

"We absolutely get that the RPA needs to get the funding from somewhere, but surely over 90% of it doesn't have to come from the organisation that it spends all of its time negotiating with ultimately?"

The group's 15 commandments criticised the RPA and its chief executive Damian Hopley for failing to prevent Premiership Rugby extending its season to 10 months.

It also said the union had "failed to secure a solitary concession" when player wages were cut by 25 per cent during the suspension of competition at the start of the coronavirus pandemic.

Asked about the aftercare players receive, Boardman added: "That's something our players are particularly disgruntled about.

"They believe they are left with their broken bodies and minds to try and get by as best they can.

"In fact one of the commandments our guys would like to see is that, upon retirement, each player gets a health MOT to see if there is anything they can get clinical attention and support for.

"We can't do trial by media, so now we've announced the litigation we've got to take a step back.

"But immediate changes need to be made to the game to protect the current generation and future players. The collisions are just as big now, the speed of the game, the workload, and there's nothing to suggest what's happened to Steve and Alix and Michael won't happen to current and future generations."