Live coverage on RTÉ2, highlights on Against the Head, RTÉ2, Monday 8pm.

Partly cloudy with temperature at around 10C.

Following a win over Wales and a loss to England, Ireland, on four points, are second in Autumn Nations Cup Group A.

England top the table on nine points and they face Wales on Saturday afternoon. A single match point will clinch the group and set up a play-off final against the team top of Group B, currently Scotland.

However, if France draw or beat Italy in Paris on Saturday evening then they will set up a showdown against England, leaving Ireland to host the Scots on 5 December.

Georgia, with former Ulster and Ireland out-half David Humphreys and ex-Ireland coach Neil Doak in short-term coaching roles, arrive with two defeats under their belt, a 40-0 loss to England and an 18-0 reversal to Wales last week. 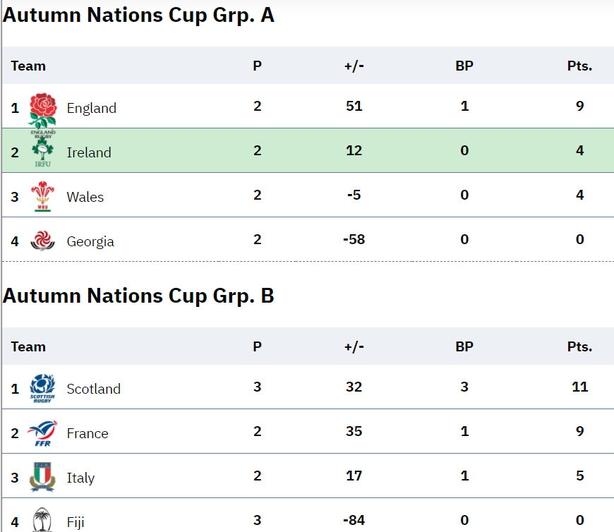 Ireland have made nine changes to the side that lost to England, 18-7, last weekend, with out-half Billy Burns making his first start.

Finlay Bealham, Tadhg Beirne and Stuart McCloskey all get the nod with the uncapped Shane Daly on the bench.

Georgia make six changes in total to their side with Soso Matiashvili and Tamaz Mchedlidze returning to the backline, while Shalva Mamukashvili, Nodar Cheishvili, Lasha Jaiani and Tornike Jalagonia come into the forwards.

Andy Farrell (Ireland head coach): "This is an opportunity for us to grow the playing pool. Unless we find out and give people the opportunity, how do they gain the experience?"

Neil Doak (Georgia coaching staff): "Hopefully we can be competitive and put Ireland under some pressure and see how they cope with that. It'll be interesting. It will be strange, but it will be a good day."