Ireland captain Johnny Sexton believes he and his team-mates proved just how much it means to them to pull on the green jersey, in their 32-9 victory over Wales at the Aviva Stadium.

Sexton was forced off with a hamstring injury that could keep him out of Ireland's trip to Twickenham to face England next week, however. His replacement Burns also went off in the second period, which will give head coach Andy Farrell potential cause for concern.

Coming on the back of their Six Nations defeat to France two weeks ago, Ireland had a point to prove against the Wales and skipper Sexton believes that they did just that.

"When you get questioned like we have over the last couple of weeks, it shows character to bounce back and it shows what kind of people we are," he told RTÉ Sport.

"We’re very proud to play for this country and sometimes when you don’t perform as well as you’d like it doesn’t come across, but you could see it out there how much it meant to us and that’s what we’re most proud of." 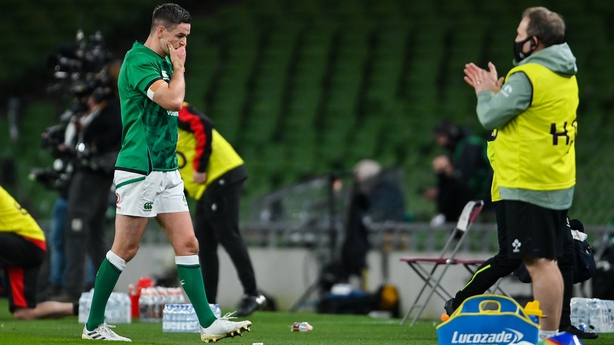 Sexton pulled up injured midway through the first-half after kicking a penalty but he remains hopeful that he could be involved against England next week.

"I just picked up a strain on that penalty so it’s frustrating," he said. "I was enjoying it out there, but most importantly the team won and we’re very pleased to bounce back.

"I'll look after it well over the next few days and hopefully I can bounce back. It doesn’t seem too serious but we’ll see what the scan says tomorrow."

The Irish skipper still sees room for improvement and admitted that they could have been more clinical against a Wales side that’s struggling for form.

"We can still be a bit more clinical, I think, in terms of taking more opportunities but we did some things much better tonight," he said.

"We’re building still with the new coaches and new personal, it takes a while get used to international rugby but we’re getting there, slowly but surely."

Player-of-the-match Caelan Doris echoed his captains comments after the match.

"I think it was good to bounce back after the away trip to Paris," said the back row forward. "The feeling after that was an opportunity missed but we're glad to have this straight away to turn our focus to.

"The big takeaway from Paris was getting our individual prep done and having complete clarity on that so we could bring intent to it. I think we were much better in that department today."