Andy Farrell insists that Ireland are "100%" still in the race for the Six Nations championship despite Sunday's chastening defeat to England.

With three rounds gone, Ireland sit third in the table with nine points, the same as England but with an inferior points difference.

France, with three wins from three, have 13 points on board with an away game to come against Scotland before a last-round home tie with Ireland.

World Cup semi-finalists England host Wales in two weeks’ time before travelling to Italy, while Ireland host the Azzurri in the next round.

If the results go to form then all three will be in the mix on Saturday 14 March.

The Italian game will be talked up as a chance to rebuild momentum ahead of the final-day shoot-out but last year's World Cup pool games against Russia and Samoa, after the loss to Japan, were spoken about in the same vein.

Bonus-point wins over those teams did nothing to help Ireland when New Zealand rocked up in the quarter-final. 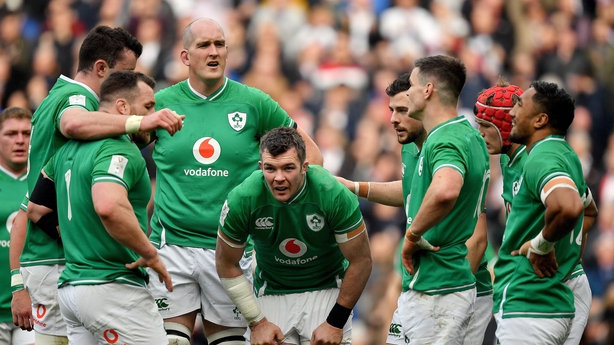 Asked if he still believed Ireland, totally out-played by England, could still claim the Guinness Six Nations title, Farrell said: "100% Why? Because we’ll take the learnings  from [the match] and when a side is desperate to stay in the championship, we’ll take learnings from why that gave them so much front-foot ball and a mentality that was a bit stronger than ours.

"We’ll take the hurt as well, take the disappointment and we need to try and make sure we get [the race] to the last weekend.

"We are in the same position as a few other teams.

"Some might say that the scoreline flattered us but at the end of the day it’s a 12-point margin, we could have rolled over against a side that were desperate, we didn’t and we’ve given ourselves a good a chance as any [team]."

Farrell added that changes would be made to the team for the clash against Italy at the Aviva Stadium on Saturday week, and that some of the replacements used at Twickenham will feel they are due a shot from the start.

"Caelan [Doris] did well when he came on, he hit the line really nicely at times," said the 44-year-old.

"It’s pretty disappointing to play your best rugby when the game was over.

"[That last quarter gave us] food for thought, obviously, but we’ve always had that thought [about changes] in the back of our minds.

"We won’t assess it irrationally; we’ll make sure that we do the right thing by the team. We’ll make sure we get the best performance against Italy."

Asked about Eddie Jones' comment that "at half-time if it was a cricket game, we could have declared", Farrell replied: "Is that what he said?

"There are plenty of teams who would have been here - us included in the past - that when a (England) side have been brimming at half-time, they probably would have felt they could get to a cricket score.

"You know, we can give ourselves credit for that.

"We started the second half pretty well with a bit of intent and a good side like they are they came back, but we finished the game off strong."

Follow Ireland v Italy (kick-off 2.15pm) on Saturday 7 March via our live blog on RTE.ie/Sport and the News Now app or listen live on RTÉ Radio 1's Saturday Sport. Highlights on Against the Head, Mondays at 8pm on RTÉ2 and RTÉ Player.