Ireland scrum-half Conor Murray is not worried about his recent barren spell without a try.

The Munster man has notched up 15 tries from 80 Ireland and five Lions matches but hasn't crossed the line in 10 games since February last year against Italy.

In the build-up to and including the Lions tour of New Zealand in 2017 Murray scored eight tries in 19 Tests.

Recently half-back partner Johnny Sexton said that Murray is now a "marked man" because of his try-scoring exploits.

Murray, who has been a vital part of this year's Guinness Six Nations wins over Scotland and Wales, says he is happy as long as the team is going well.

"It's nice to score a try. But for me, to set a fella up or put a fella away in an assist type way is just as pleasing," he told RTE Sport.

"Those opportunities or those try-scoring chances haven’t been there as much for whatever reason.

"In terms of my role in the team, a few things are going pretty well and I’m really happy with where I’m at.

"If tries come my way then great, but it’s not really part of my role. Yeah, it’s great to score them, but if I can help put Jacob [Stockdale] away on the outside or do something in the lead-up to a try that really helps a team, then that’s great.

"I’d much rather it be going well that way than be scoring tries and have a problem with the other parts of my game.

"Right now, I’m really happy with where I’m at. If tries come your way then great, but if we’re winning and I’m putting people away then that’s absolutely fine."

Murray will have the opportunity to add to his tally when he lines up against England on Sunday and reflected on their last championship game in Twickenham, the Grand Slam-clinching victory in 2018 under former head coach Joe Schmidt.

"That whole week our attitude and our mindset was really, really good," added the 30-year-old, whose side can claim the Triple Crown with a win in London.

"We knew we had to go to Twickenham and perform. Not necessarily take risks or chances, but go after the game and attack the game.

"I thought we did that really good. I thought defensively our energy was right up there with one of our best performances defensively.

"That really helped us in our overall performance. I think before half-time, our decision to run a play - I can’t remember what set-piece it was off - but we ended up scoring a try.

"I think Jacob scored with the 'chip and chase’.

"Just have the willingness to go and chase that before half-time.

"A lot of teams might have waited until the clock went to 40 minutes and kicked it out. Whereas that day and that season, we backed ourselves, which was fantastic.

"There are an awful lot of aspects to that performance that we’re chasing."

Follow England v Ireland (kick-off 3pm) on Sunday via our live blog on RTE.ie/Sport and the News Now app or listen live on RTÉ 2fm.

Highlights on Against the Head, Monday at 8pm on RTÉ2 and RTÉ Player. 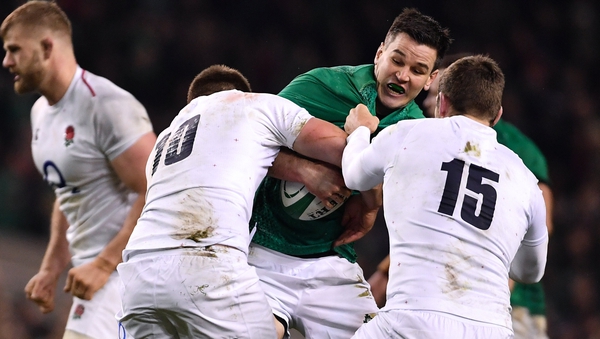