Jack Crowley claimed 18 points as the Ireland U20s began the defence of the Six Nations crown with a 38-26 bonus-point win over Scotland at Irish Independent Park.

A tight first half ended with a superb counter-attacking try from out-half and man of the match Crowley - his second of the night - as the momentum shift steadied Ireland at 21-12 up.

Indeed, by the eighth minute of the second half, the home side were 33-12 to the good.

Andrew Smith and Thomas Ahern added to those earlier seven-pointers from Crowley and Thomas Clarkson, but Scotland, despite conceding again to John McKee and losing Rufus McLean to the sin-bin, salvaged a bonus point with final quarter scores from Nathan Chamberlain and Cameron Scott.

In the night's other game, there was a shock in Wales as the home side were beaten 17-7 by the Italian Under-20s. France play England on Saturday evening.

"I thought we were excellent in the first half, we took our tries really well," head coach Noel McNamara said afterwards.

"And we did the same at the start of the second half to put some distance between the teams on the scoreboard. 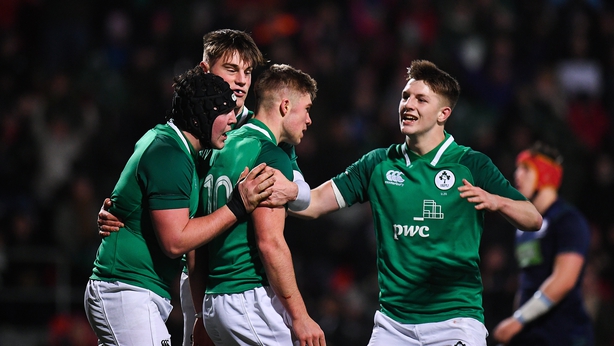 "It's a good start nonetheless, it's a starting point for us. Hopefully we can get a lot better from this performance. We'll review it and the boys will go away and re-energise. There's plenty for us to improve on as we move forward in the Championship."

The opening try arrived from an 11th-minute scrum, Dan Kelly attacking hard to the left and although his offload went loose, the ever-alert Crowley scooped it up, accelerated and spun out of a tackle to touch down. He comfortably knocked over the conversion.

Scotland hit back within five minutes later, with Robbie McCallum making ground before powerful hooker Ewan Ashman shrugged off a couple of tackles and made the line despite Andrew Smith's last-ditch challenge. 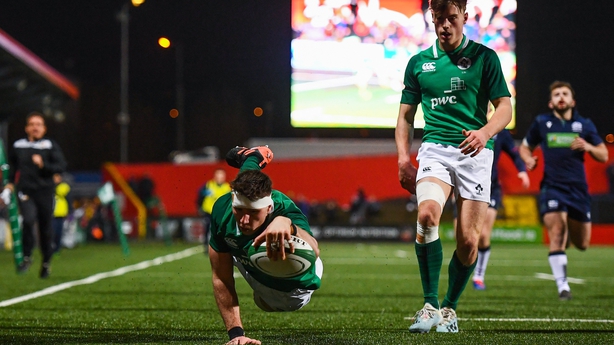 Towering lock Ahern and Sean O'Brien were both denied at close range before tighthead Clarkson drove low to ground the ball under a Scottish defender, with Crowley converting to give a 14-7 advantage.

Scottish winger Jack Blain got in for their second try in the 34th minute, but Crowley claimed the outstanding score of the game on the stroke of half-time.

Using a Rory Jackson knock-on to break from his own 22, the Corkman sped clear and with a strong hand-off on the covering Ollie Smith, the out-half finished under the sticks, converting his own try to make it 21-12 at the break. 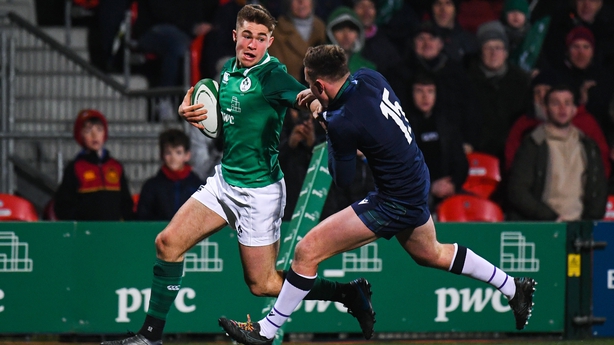 McNamara's side kept their foot on the gas on the resumption, stringing together two quick-fire tries to leave the Scots a full 21 points in arrears.

Busy flanker O'Brien impressed with a run in between two defenders and a pass out of a tackle for Smith to claim the bonus point from his left wing berth.

Crowley suffered his only miss of the game just a few minutes later. Ireland countered up the right wing with lovely hands from McCann releasing his Ulster compatriot Tom Stewart. The hooker showed excellent pace as did the athletic Ahern who was up in support to finish off past stunned replacement winger McLean. 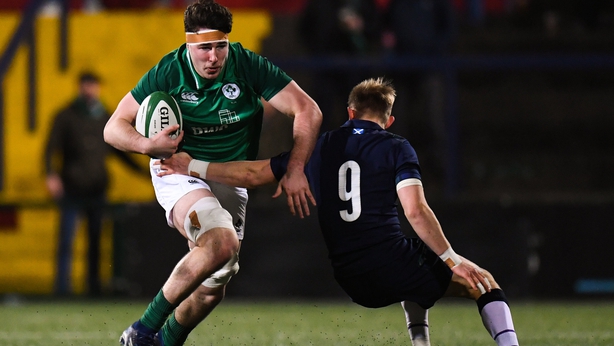 Scotland lifted their spirits with a try at the start of the final quarter through Chamberlain.

Scottish replacement Rufus McLean saw yellow for a clumsy challenge on Oran McNulty in the air, the latter turning a very efficient performance at full-back for Ireland.

In the sixth minute of injury-time Cameron Scott went over to put a gloss on the scoreline. 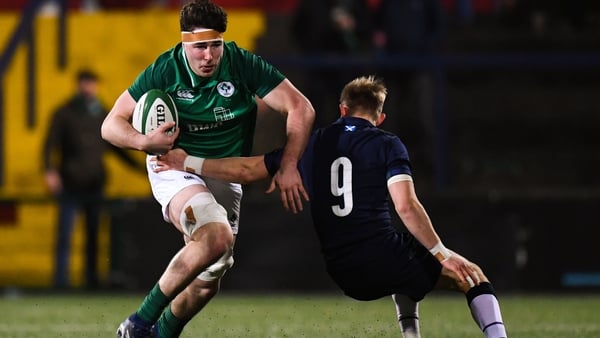