Johnny Sexton is a doubt for next weekend's Champions Cup return fixture with Northampton after the Ireland out-half suffered a knee injury today in the comprehensive victory at Franklin's Gardens.

Sexton appeared to twist his knee as he was tackled in the build-up to Leinster's fourth try, which was scored by Cian Healy.

Sexton immediately limped off and was replaced by Ross Byrne, who scored the fifth of the Irish province's seven tries in what was a dominant 43-16 win at Franklin's Gardens.

The No 10 spent the rest of the game watching from the bench with his knee heavily bandaged and head coach Leo Cullen admitted they will be playing the waiting game to find out the nature of the injury.

"He's a little uncomfortable at the moment," he said post-match.

"He has a bit of strapping on his knee. I'm not sure exactly [how he is] to tell you the truth.

"He will get a scan tomorrow and will see the extent of it." 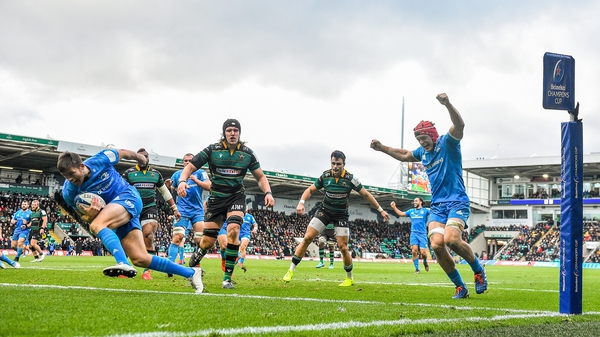