Live blog on RTÉ.ie and the RTÉ News Now App from 10.30am

Live coverage on RTÉ2 and the RTÉ Player from 8am. (England v Australia being broadcast live beforehand)

There is up to an 80% chance of rain throughout the day, possibly even thunderstorms. There could be a high of 24°C and a low of 16°C. The rain should ease off into the evening, with cloud cover predicted and high humidity.

"I wouldn't often speak in black and white terms over what success looks like, but we know the only way that we can be successful is to get past that quarter-final."

Those were Joe Schmidt's words at the beginning of the tournament and now that quarter-final date looms.

At the outset of the competition, and especially once Scotland were disposed of, many would have imagined it would be South Africa lining up opposite Ireland this weekend.

The impudent hosts intervened with their energetic running game and derailed that particular train. So, it's the reigning champions New Zealand with whom Schmidt's team must dance tomorrow.

The Ireland coach insists it's much of a muchness anyway. South Africa won the Rugby Championship this year and are hitting their stride perfectly in time for this World Cup.

While New Zealand - and this is the sort of statement which can only be made very tentatively - may not quite as intimidating as in recent World Cups. Though still formidable, needless to say.

In Micíl Glennon's preview, he pointed to Ireland's stunning defensive performance in last November's victory over the All Blacks.

"Andy Farrell's defence succeeded in keeping the visitors to two penalties and a dropgoal, all from Beauden Barrett, 11 months ago and delivered a masterclass in discipline.

"They conceded only 11 turnovers and five penalties, to New Zealand's 17 and 11. The set-piece stood firm and although the Webb Ellis holders broke through on occasion the desire to scramble (164 tackles) and deny their opponents was key to the victory.

"On only one occasion in 104 Tests under Hansen has his team been kept to single digits. That was the game."

It is this that Ireland need to replicate on Saturday, while developing a less narrow attacking game in possession.

New Zealand completed back-to-back World Cup victories in 2015 with that hardcore of grizzled but gifted operators who'd been on the go since the early days of the Graham Henry era.

Richie McCaw, Dan Carter, Conrad Smith and Ma'a Nonu have long since departed. And the team contains seven changes in personnel from the one which lost in Dublin last November.

The electric Beauden Barrett, so long understudy to Carter, and the World Player of the Year at out-half in 2016 and 2017, is now being deployed at full-back, with the Crusaders Richie Mo'unga selected at 10.

The 25-year old has studied under the tutelage of Ronan O'Gara at the Canterbury outfit, and has noted warmly of the Munster legend - "ROG has been awesome. He's still very hard to understand, so I take very little from our conversations."

Striking a positive note on the RTÉ Rugby podcast, Eddie O'Sullivan suggested that Ireland could have the edge in the kicking game, with the inexperienced Mo'unga making just his eighth start for New Zealand on Saturday.

"Richie Mo'unga has not a great kicking game. He's not as astute at exploiting (the space) in the backfield. That's good for us. Especially, if it's wet.

"It's another weakness. It's hard to believe we're talking about All Black weaknesses. But they don't have a really front-line, high percentage place kicker. Mo'unga seems to be the one they go to more often when both of them are on the field. He seems a bit more reliable. But neither of them are lock steady.

"When you compare them to Sexton, if it comes down to a drop goal or a late penalty in a one-score game, that gives us an edge there. If you comes to that, I'd back us to win that sort of a battle in terms of the goal-kickers shooting it out."

Ireland have particularly painful memories of Nigel Owens's officiating in this fixture. In Christchurch in 2012, with the scores tied at 19-19 entering the closing minutes, he penalised Cian Healy and the Irish scrum when they appeared to have the New Zealand pack under pressure. 'Running it around' was the offence and New Zealand worked it up the pitch, eventually manufacturing a winning drop goal.

More famously, a year later he awarded a late penalty against Jack McGrath which handed back possession to New Zealand in the the dying second of the epic 2013 game. The All Black attack concluded with Ryan Crotty going over in the corner to win the game.

In something of a turnaround in attitudes in Irish rugby circles in recent years, most fans here might have preferred if Wayne Barnes was handed the whistle for this one (amazing what winning a few games with a certain ref ca do).

The Welshman's fondness for keeping the game flowing may not suit tomorrow given New Zealand's notorious tendency to push the boundaries.

But Owens, who reffed the 2015 World Cup final, remains a popular and highly respected official. Speaking on the RTÉ Rugby Podcast, O'Sullivan welcomed his appointment from an Irish standpoint.

"Nigel Owens is a good guy in the middle because I think he's not going to be overawed by the occasion. He'll call it down the middle. He has a reputation for being involved in tight games as well, which is good for us." 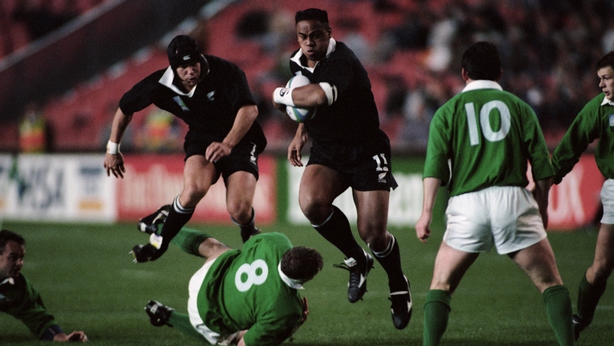 Despite their extensive history of test matches, Ireland and New Zealand have only collided once before in the World Cup.

That was in the opening weekend in 1995 in Johannesburg. The match is primarily remembered for two things, Gary Halpin's giving the All Black pack the finger after scoring the game's first try and Jonah Lomu announcing himself on the world stage.

Halpin has wrung great craic out of his impetuous act of flipping the bird in Sean Fitzpatrick's direction. "Sean Fitzpatrick had been winding us up, calling us Paddies," he said years later. "And I couldn't really believe I’d actually scored a try.

"It was a rather stupid thing to do, being a teacher and all… But I dined out on it like a lord. That was when I discovered the South Africans hated the Kiwis more than anyone."

From today's perspective, watching Lomu contemptuously shunt Irish tacklers out of the way is like looking at a modern, hulk-like professional rugby player swat away the baggy-jerseyed solicitors and doctors of yesteryear. Or else it’s like looking at a kid who’s mysteriously been planted in an age grade about three years too young for him.

He scored two tries himself and laid one on a plate for Zinzan Brooke after an astonishing run down the left wing in which he shrugged off about four attempted tackles.

Grounds for consideration - ranking the GAA's venues for a winter championship