It was a day to forget at Twickenham.

Yes, the real business starts in Japan next month, but Ireland's dire 57-15 defeat to England, a record loss against the old enemy, left Joe Schmidt with more headaches as the window of preparation begins to close.

The upcoming back-to-back games against Wales now assume critical importance, with Ireland desperately trying to iron some of their defensive issues ahead of the pool opener against Scotland.

Conversely, Eddie Jones' men are moving nicely, and the English media are starting to get excited. 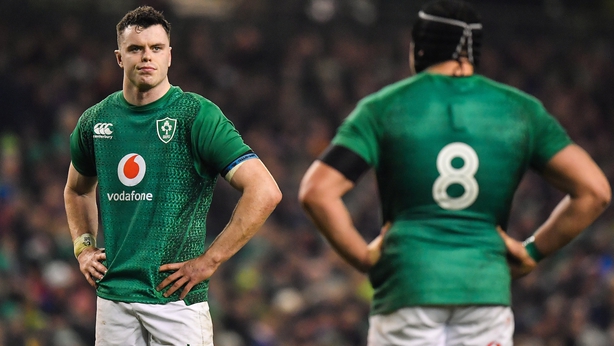 Their 2003 World Cup-winning head coach Clive Woodward writes in his column for The Mail on Sunday: "This was a real statement win from England and Twickenham was buzzing as the crowd realised they have a team who can cause real damage at the World Cup.

"There were eight tries and a power game that must have caught the imagination of the spectators - it certainly caught mine. This was a 10 out of 10 performance and although Manu Tuilagi got the official man of the match award, Owen Farrell was the ringmaster. Repeat this sort of form in Japan and England are going to take a lot of beating.

"The world will take notice and coaches all over will know they have to find a way of stopping England's power game. Yes, Ireland’s scrum and lineout were poor but England were spot on in those departments. George Kruis and Maro Itoje were outstanding in the second row as the Irish were outmuscled from 1-15 by England’s physicality."

The Guardian's Robert Kitson said the Irish can forget about going all the way in Japan. "Precious little, save for Bundee Aki's 73rd-minute try, went right for Ireland thereafter. The margin of victory means England overtake them in the world rankings and, on this evidence, just one of these two sides has any chance of lifting the Webb Ellis Cup. Only if Schmidt is trying to douse expectations was this a green day to remember."

Alex Bysouth, writing for BBC Sport, also painted a grim picture. "Ireland still have to cut nine players from a current 40-man panel before they begin their World Cup against Scotland in Yokohama on 22 September, but few players did their hopes any favours from there on in at Twickenham.

"As the visitors' error count grew, so did England's advantage and Ireland finished the match having conceded 19 turnovers and lost six of their 15 line-outs. New Zealand-born centre Aki demonstrated the threat he poses when he sprinted over for Ireland's second, but even that consolation was wiped out when they gifted Cowan-Dickie a try late on."

In The Telegraph Ali Stokes is a bit more upbeat about Schmidt's men's prospects. "In a performance riddled with errors and poor judgment calls, Ireland limp into back-to-back games against the Welsh. Will this Twickenham humbling spark a highly-charged World Cup campaign? Or sow a seed of doubt before the plane has left for Japan?

"History tells us we should read little into the results of this warm-up period. Ireland's hopes are far from dashed."