Leinster’s Johnny Sexton is confident he’ll be able to hit the ground running when he lines out for his side in Sunday’s Champions Cup quarter-final against Toulouse.

Sexton comes into the game short on match practice and has not lined out for his province at all this year having picked up an injury in the Six Nations and eased back into things by Leinster.

The Leinster skipper has not played since Ireland’s defeat to Wales on 16 March and he sat out his side’s quarter-final victory over Ulster.

However despite a lack of recent game time, Sexton believes that he’ll be up to speed against Toulouse and ready for whatever the French side can throw at him.

"After the Six Nations I just fought hard to get the body right and had a few issues that needed to get sorted," he told RTÉ Sport.

"I nearly got there for Ulster and just missed out but obviously the temptation was there to maybe have been involved last week. We spoke about it at length, about what was best, but we all felt that it would be best to come in fresh and be ready to go.

"I remember Robbie Henshaw’s performance last year in the Scarlets semi-final after dislocating his shoulder twelve weeks previously and it was just incredible, the physical little things he could do because he worked hard.

"When you’re injured often you’re working harder than the guys who are fit because they’re getting ready for the weekend and recovering, so hopefully we’ll be fit and ready to go."

Leinster have already played the French side twice this season having been drawn with them in the group stage of the competition. 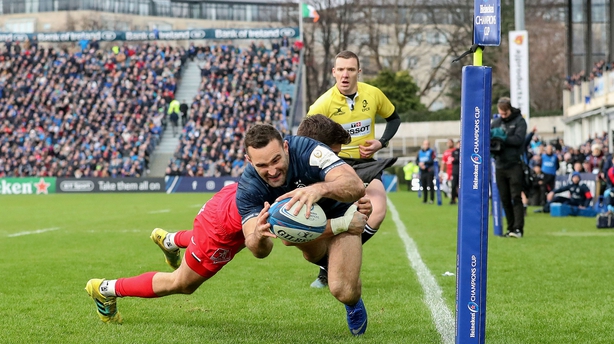 The Blues lost by a point in France back in October but gained a measure of revenge with a 29-13 victory in Dublin in January. That defeat to Leinster was the last time that Toulouse lost a game and they’ve since gone on to win their last ten games.

Sexton is expecting a major test against the French side but believe Leinster will have enough about them to get the result.

"Toulouse are a team who like to play quick and get the ball in quick so we’re going to have to be ready physically and mentally.

"We take some good lessons from the first two games, especially the first one away in Toulouse. We learnt a lot in that game and then we put it to use in the RDS and got a good result.

"Now we have to go and sort of mix and match between those two games. We’ve looked at all the other games, particularly the Racing quarter-final and another game they play against Racing in the Top 14.

"There’s lots of games to highlight what a dangerous team they are and then add in conditions and the hard ground and it becomes a little bit tougher."

"They’re well organised but they do score a lot of tries off turnovers and kicks. So they’re two area where we’re going to have to look at, to limit their supply but then they’re going to have other sources of possession where they’re dangerous as well.

"You look through their whole team and they’ve got size and pace. They’re the full package so we’ll give them more than the respect they deserve and just because we’re home, we’re taking nothing for granted."