The powerful centre represented three Irish provinces, performed in the Heineken Cup for three different teams and tasted defeat to Leinster in the 2012 decider, experienced club rugby in Italy and made his international bow at the age of 32.

After starting out trying to make a name for himself with Clontarf, a 13-year professional career drew to a close as a squad player with Wasps.

The plan was to finish with Munster, but that didn't work out and he wasn't prepared to hang up the boots in 2016. 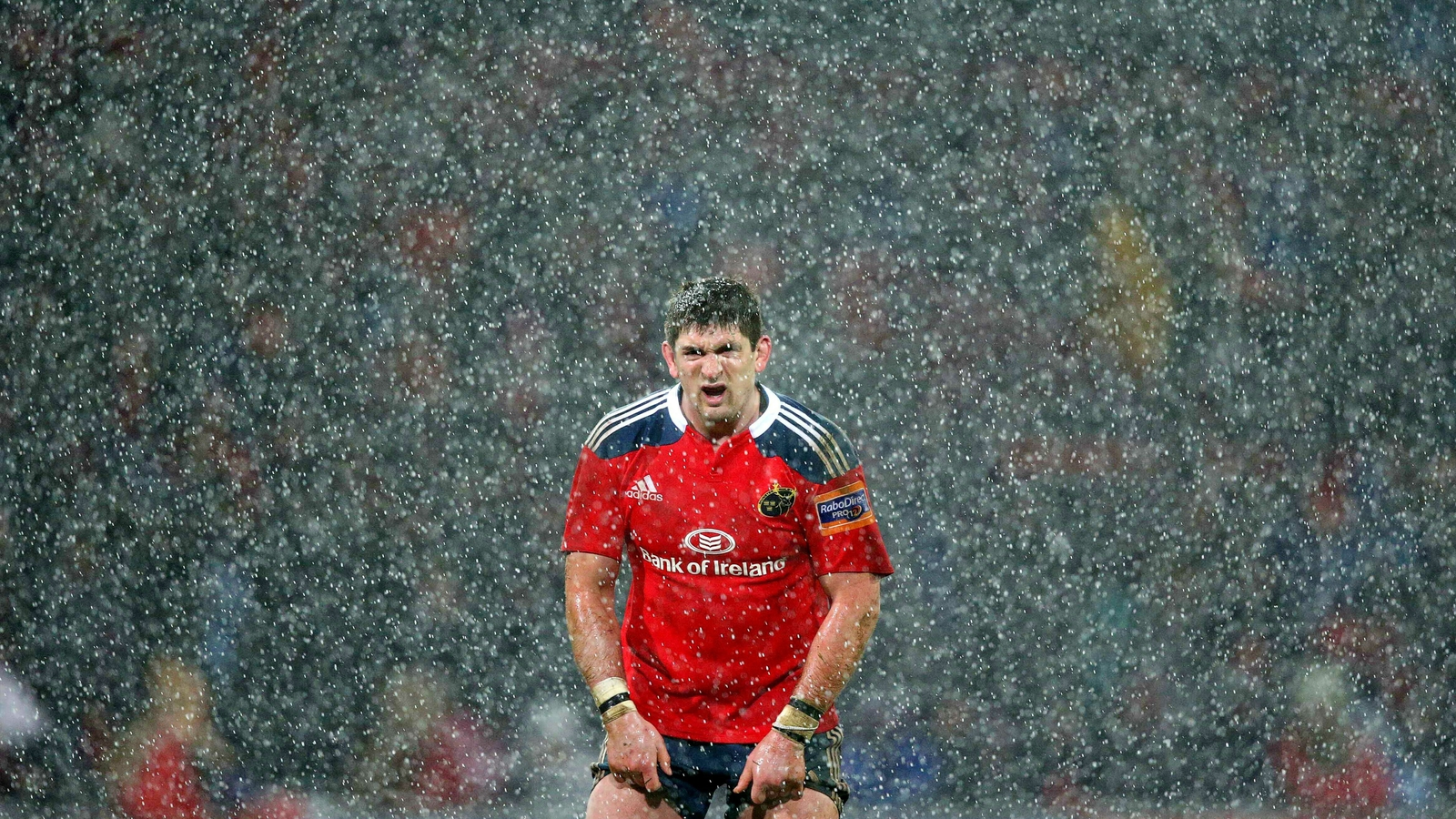 "Your career goes full circle," he tells RTÉ Sport. "When you are starting out, you aren't involved much as you look to impress. Then you look to establish yourself and in the latter part of the career, for me with Wasps, you are trying to get as much game time as possible."

Ultimate recognition came in Ireland's last game of the pre-Joe Schmidt era, something he regards as an "absolute honour", but it was just one chapter in a roller-coaster professional career.

Despite not making the Ireland Schools grade, eye-catching performances with Clontarf meant Declan Kidney called James Downey into the Ireland U19 squad when he had two years left in the grade.

Part of a gifted side that reached the 2003 AIL league final, Leinster head coach Matt Williams summoned the midfielder into Leinster training sessions and that soon turned into a training contract. 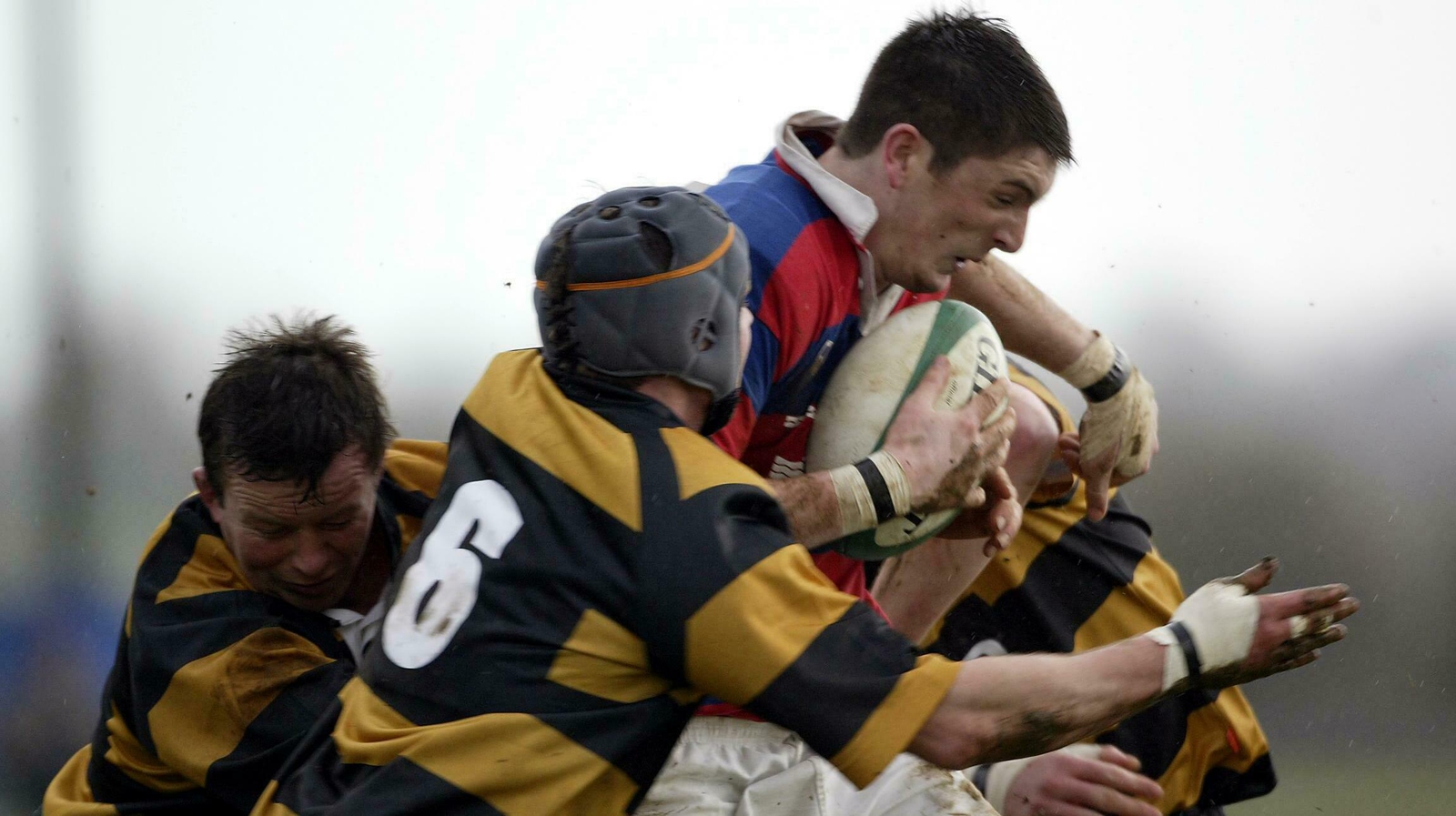 Downey in AIL action with Clontarf in 2003

Downey's decision to undertake a sports management degree at UCD meant he juggled college one day a week and had four days to concentrate on rugby.

On the same day that the Rugby World Cup got underway in Australia, Downey came on for James Norton in Leinster's 22-3 defeat to the Cardiff Blues for his debut. 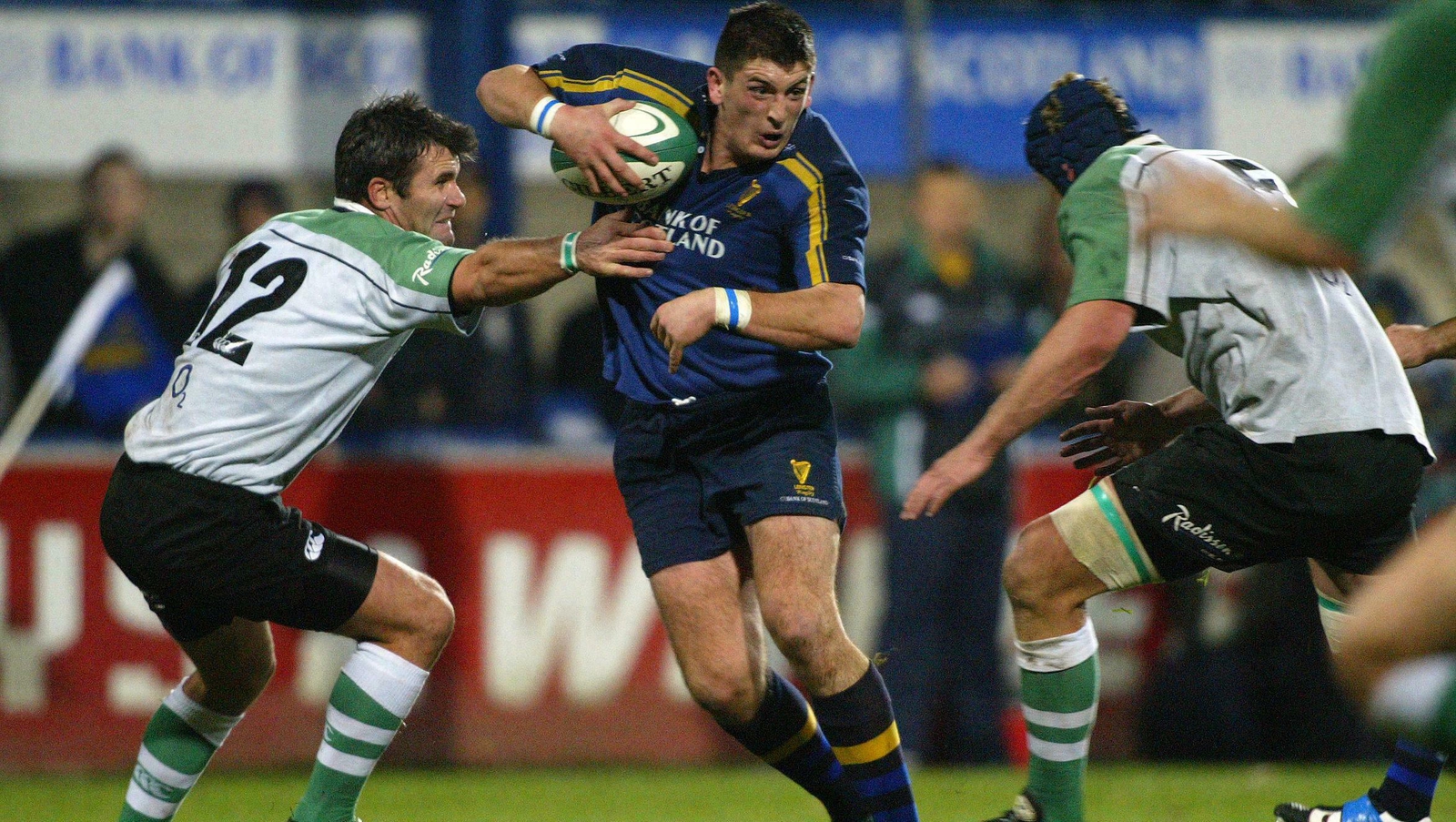 Connacht were the opponents in one of his three Leinster appearances

Gary Ella was now in the Leinster hotseat, but his Leinster career would last just three games. Shane Horgan and Gordon D'Arcy – converted to centre after missing out on World Cup selection – were ahead in the pecking order, as was Dave Quinlan.

"It was a no-brainer to get out of there to play some rugby."

Connacht was a well worn path from Leinster and the first year in Galway was a success from a personal point of view even though Michael Bradley's side lost 12 of their 20 league outings. The following season however was a regressive one with limited time on the pitch.

Keith Matthews and Mark McHugh were the first choice midfield pairing with Downey sidelined with a broken collarbone. Back surgery was required by the end of a season that saw the Dubliner make just a handful of appearances. 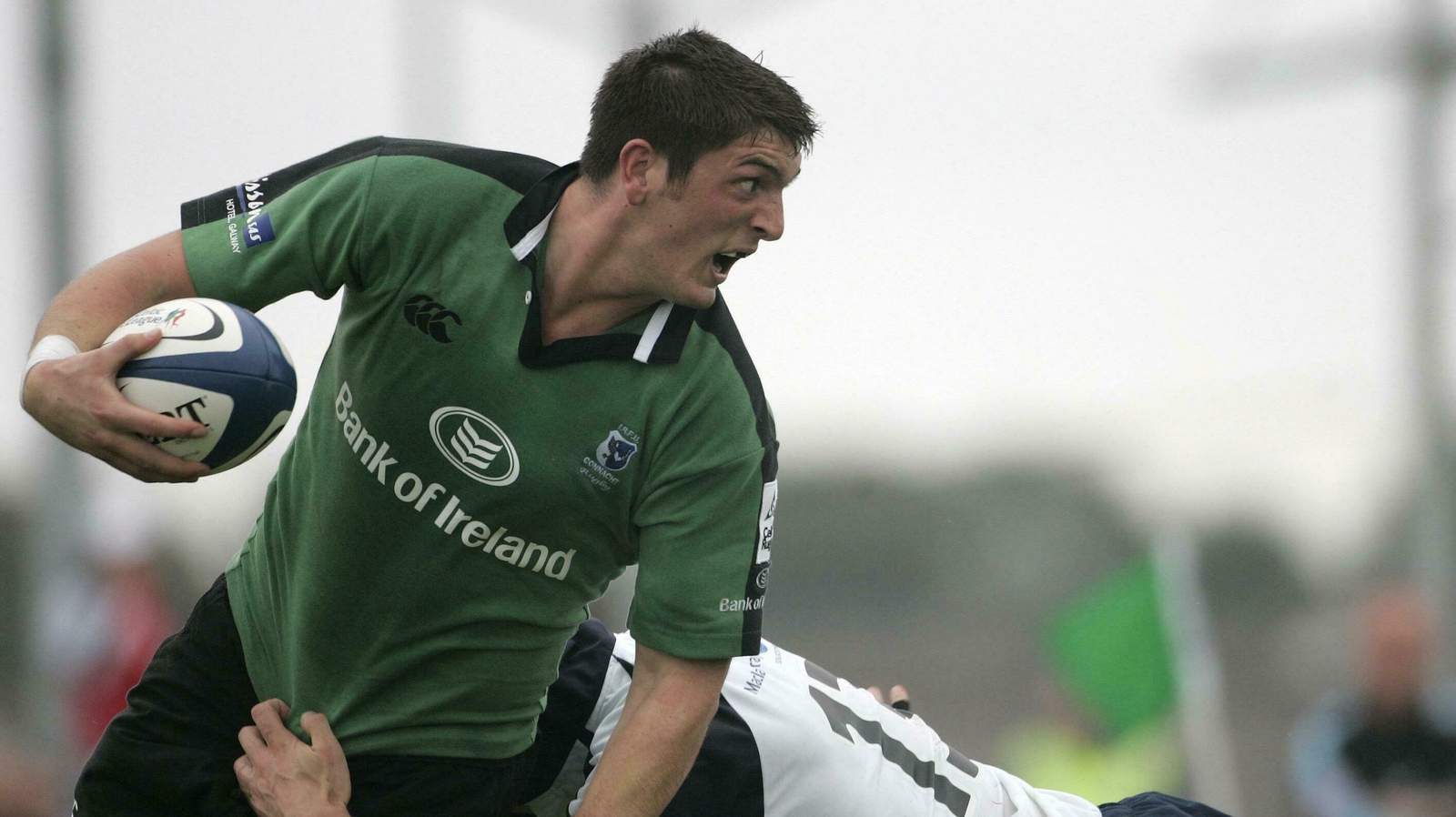 The Dubliner enjoyed a fine first season at the Sportsground

Surplus to requirements and without a contract, Downey got onto his U19 coach Kidney and pleaded for a trial with the newly crowned Heineken Cup champions Munster.

"I wasn't ready to give up on it yet. If Munster hadn't have happened, I don't know what I would have done.

Happy to train for free – "I was that desperate to prove my worth" – Downey felt if he kept the head down and worked hard, an opportunity in a star-studded squad could be his.

He stayed on John O'Sullivan's couch during the week and returned to Dublin at the weekend to play for Clontarf. The three-month stint yielded three appearances, but nothing concrete was forthcoming.

There were lingering concerns over his back, and when they finally dangled the carrot of something more long-term, Downey had decided on embarking on a completely new rugby adventure to Italy. 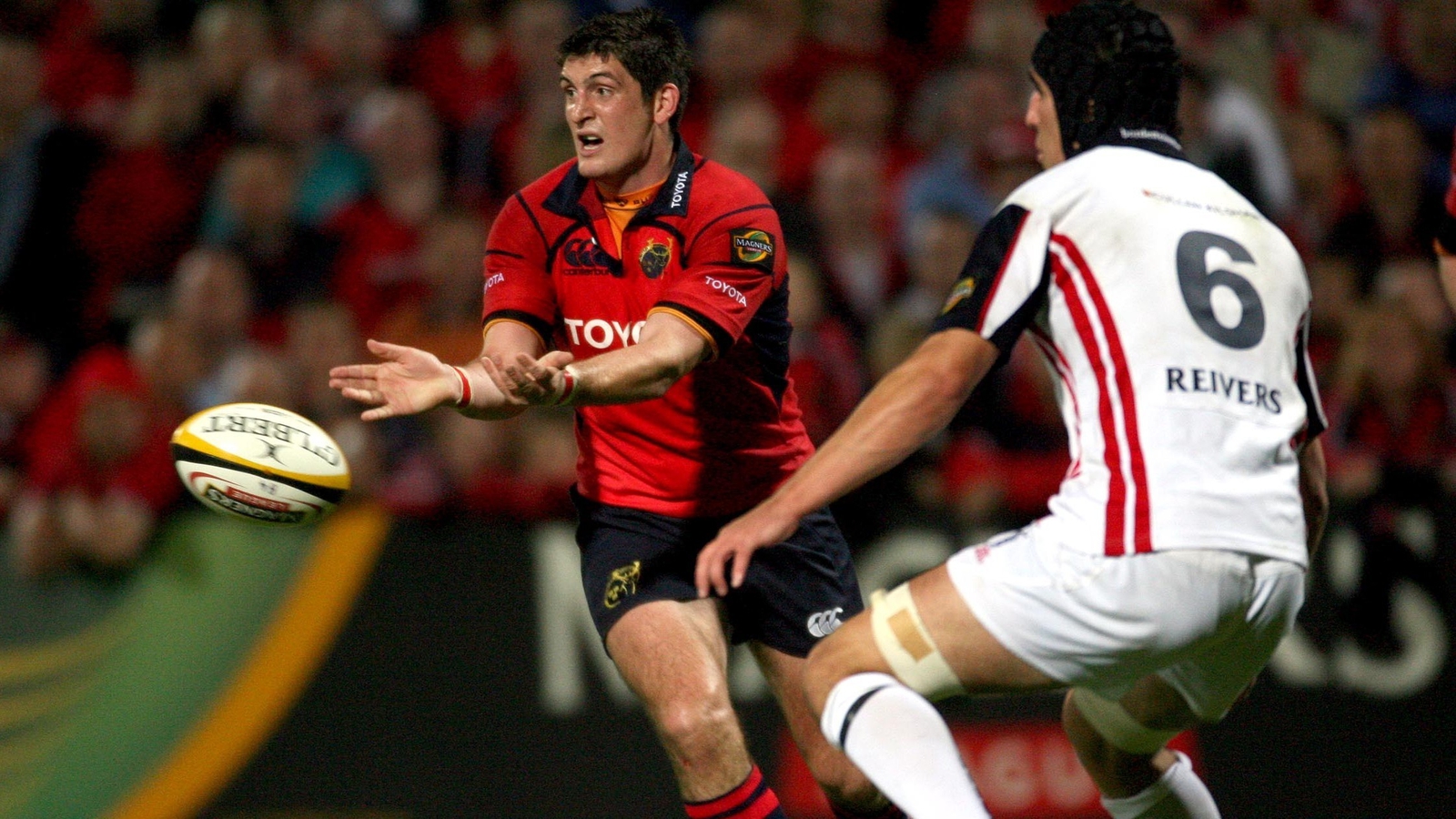 Calvisano, then competing in the Heineken Cup, made contact and Downey felt it was time for a new challenge.

"I suppose I had fallen out of love with the game a little bit," though he admits that even after signing his contract he contemplated changing his mind as he tried to weigh up the move to the continent.

He need not have worried. "It was an amazing nine months."

The lifestyle was just what he needed after a difficult 18 months, and while the rugby was frustrating at times, it was a time for development.

French coach Marc Delpoux spoke no English which meant scrum-half Paul Griffin became something of a translator, while a smattering of Kiwis made the adjustment that bit easier.

Downey started all six pool games of the Heineken Cup in 2006/07, though the going was tough. The minnows shipped on average 44 points a game as they slipped to six defeats, the price paid for swimming in the same waters as Ospreys, an in-form Stade Francais and Sale Sharks.

"It was a leap of faith, but it was exactly what I needed. I'd agreed to stay for another two years, but things seem to happen for a reason."

By a quirk of fate, Dave Quinlan, the man who effectively edged him out at Leinster, had decided to hang up his boots at Northampton. The Saints were looking for a physical centre to come in and help the club bounce back from relegation from the Premiership.

The Saints went unbeaten to ease to promotion, while the Challenge Cup was secured in his second season at Franklin's Gardens.

The bond was tight among the players, the club was rejuvenated and Downey was at the heart of it. 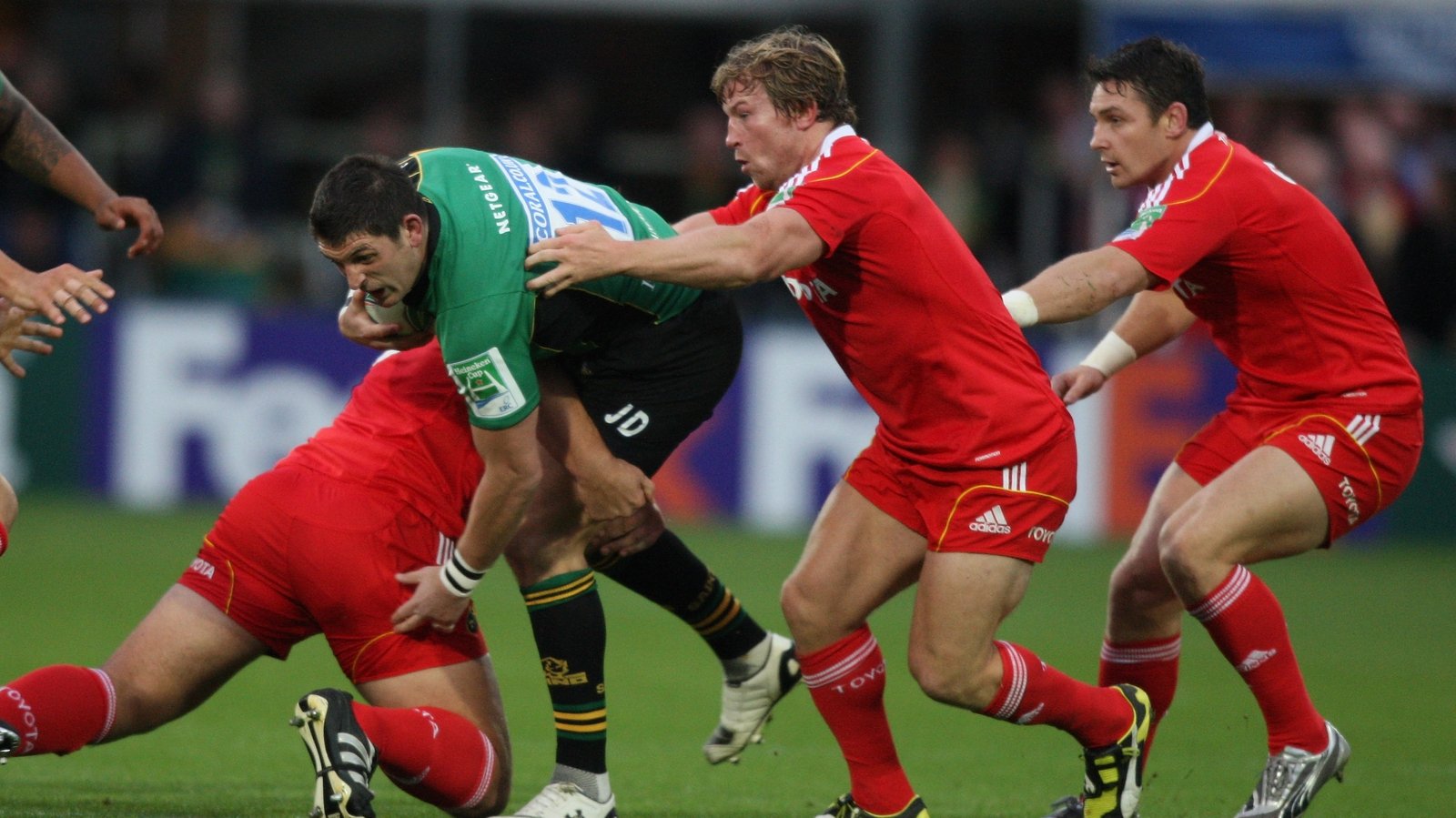 "The style of rugby suited me to be honest. It was attritional. We made very few changes to our-match-day 23, barring injury. That's what I needed, to play week in, week out."

Damian Browne was his room-mate and he still keeps in contact with Chris Ashton, Matt Dillon, Ben Foden and Courtney Lawes.

"I was nearly English qualified as well, but that would have been a no-brainer!"

Five enjoyable years were put down in the East Midlands, though for many, the reference point is the 2011 Heineken Cup defeat to Leinster. Leading 22-6 at the break with a dominant scrum, Joe Schmidt's side overwhelmed the Saints for a second title in three years.

Disappointed by the manner of defeat, but no qualms with the result, Downey recalls sharing the post-match meal with Johnny Sexton. Differing emotions, and little flow in conversation 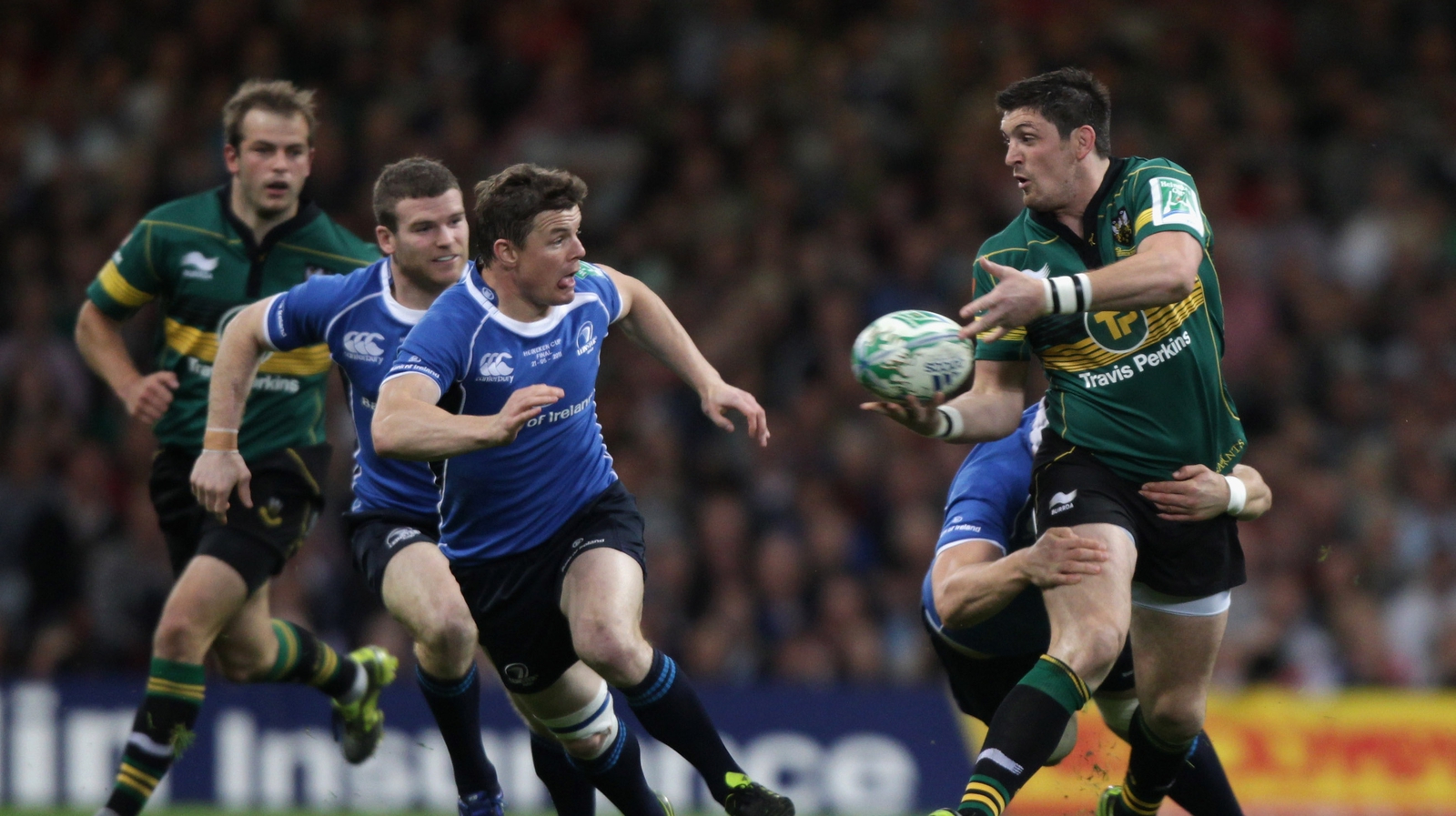 Breaking the Leinster defence during the 2011 Heineken Cup final

The silver lining was he was now very much back in the Irish conversation and his stock was rising. In fact Ireland wasn't his only international window of opportunity.

"I was nearly English qualified as well, but that would have been a no-brainer!"

Towards the end of the following season, he met Tony McGahan, Shaun Payne and Jason Holland to discuss a move to Munster. While he had stability in his playing career, the time was right to return to Irish rugby and push his Irish claims. 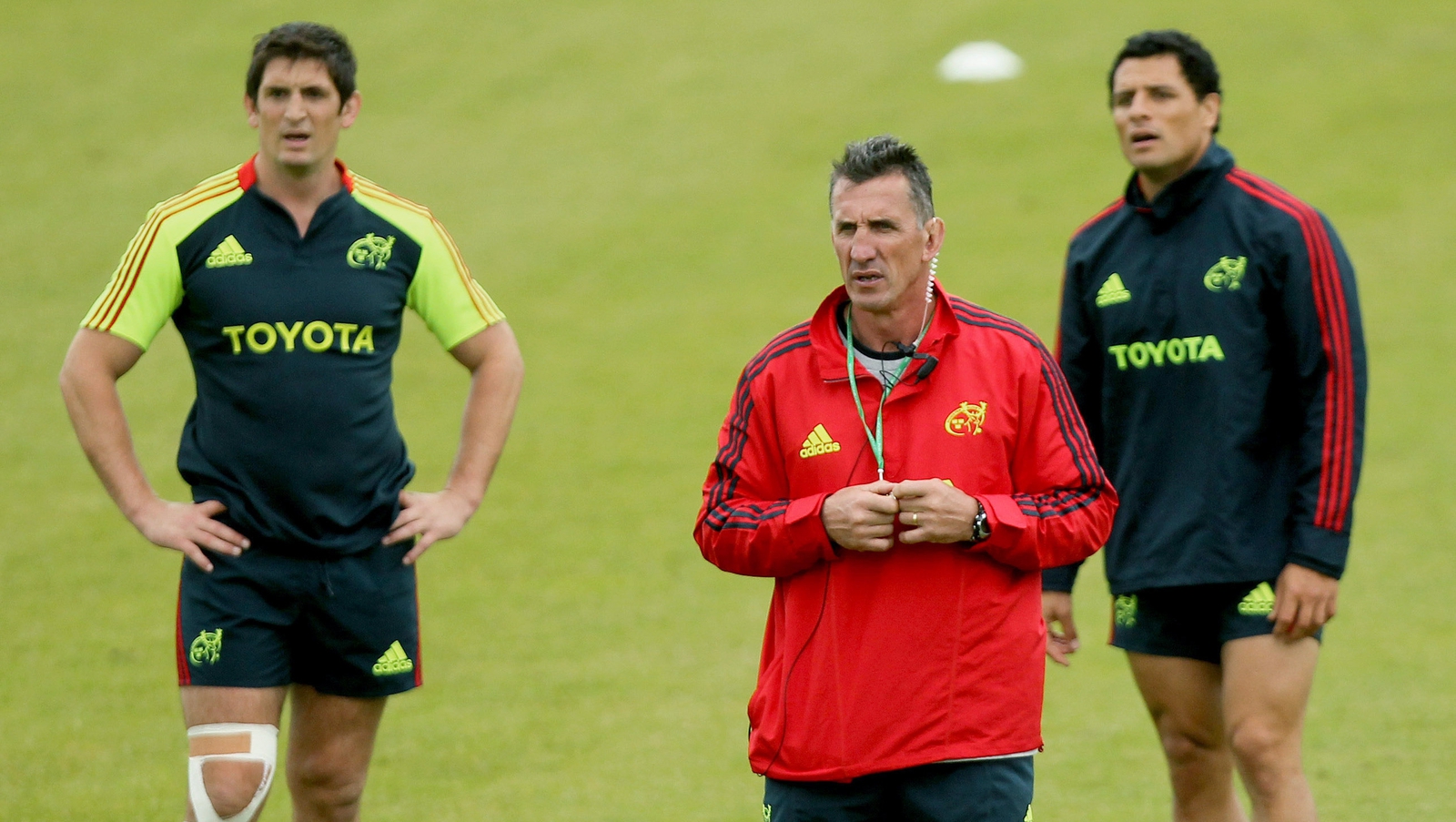 Downey believes Munster may have tried too much, too soon under head coach Rob Penney

By time he arrived back at Thomond Park, all three men were gone, with Rob Penney and Simon Mannix looking to radically alter Munster's attacking gameplan.

"At times that first season, the players and fans alike were frustrated. I think we tried to do too much too soon. When we went to playing cup rugby, we reverted to that old-school Munster mentality."

Two European semi-finals illustrated that Munster weren't a million miles off the pace when everything clicked. Under Penny, his distribution and reading of the game went to a new level.

No longer was he expected simply to carry hard to the line, he had to play heads-up rugby. 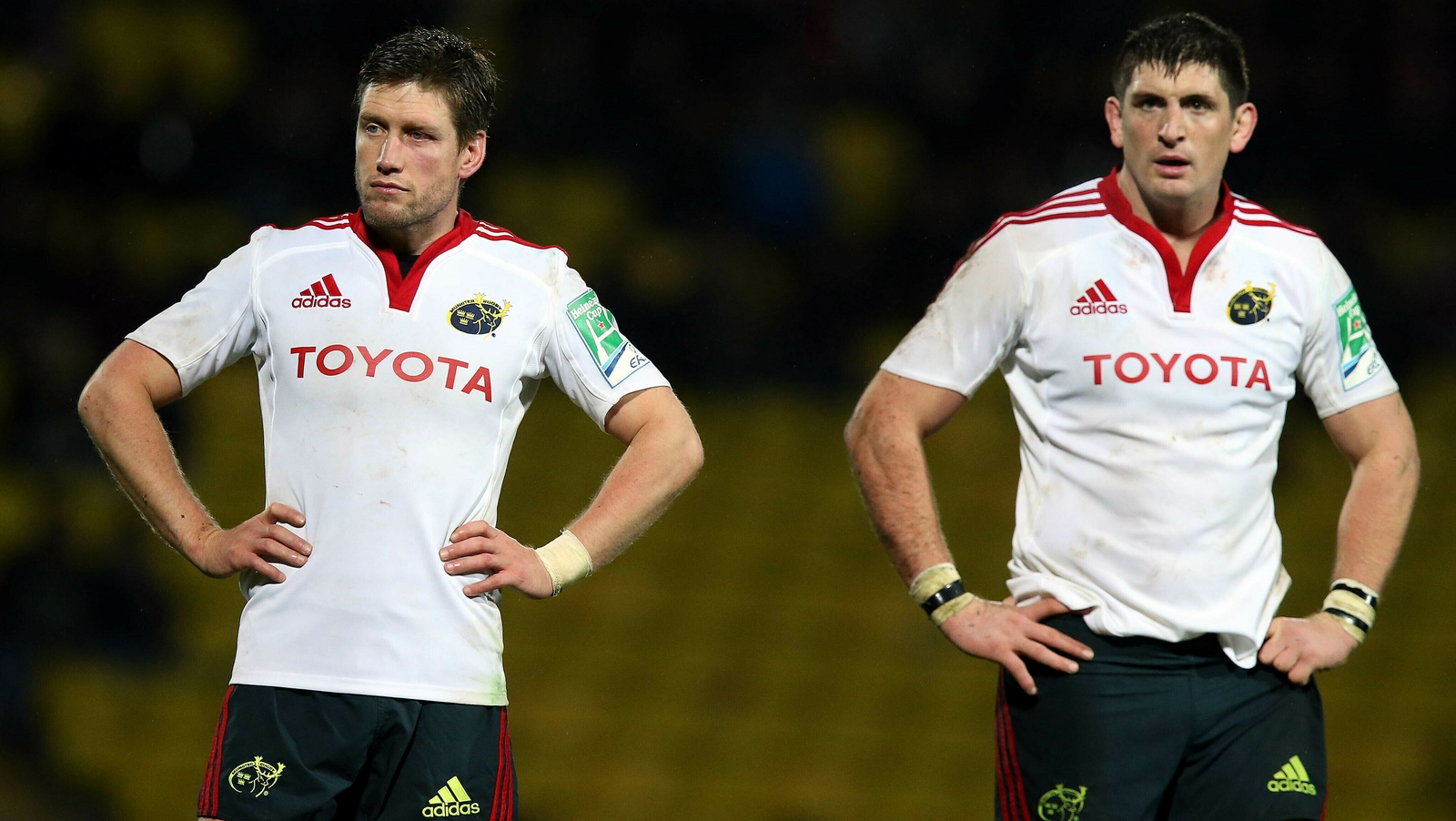 A firm understanding was struck up with out-half Ronan O'Gara

It was during this time that he began to see more involvement around the Irish team camp. Already a Wolfhound, he linked up with the Irish squad during the November internationals of 2012.

With a Lions tour taking place in Australia, places were up for grabs for the North American tour that summer which was overseen by Les Kiss, Anthony Foley and Neil Doak following Declan Kidney's departure.

With Stuart Olding sustaining a knock to his ankle, the 32-year-old was called into training and Kiss felt he should travel as part of the 29-man squad despite the fact the Ulster centre had fully recovered.

"I was lucky enough really," he says. A Peter O'Mahony captained Ireland edged past the United States by three points in a game where five players, including Robbie Henshaw, made their debut.

Downey wasn't part of the match-day 23, but a week later in Toronto he was handed the 12 jersey, partnered in midfield by Ian Madigan.

Despite being so experienced, the nerves were to the fore during the week. It was a talk given by Enda McNulty aimed at the new caps on tour 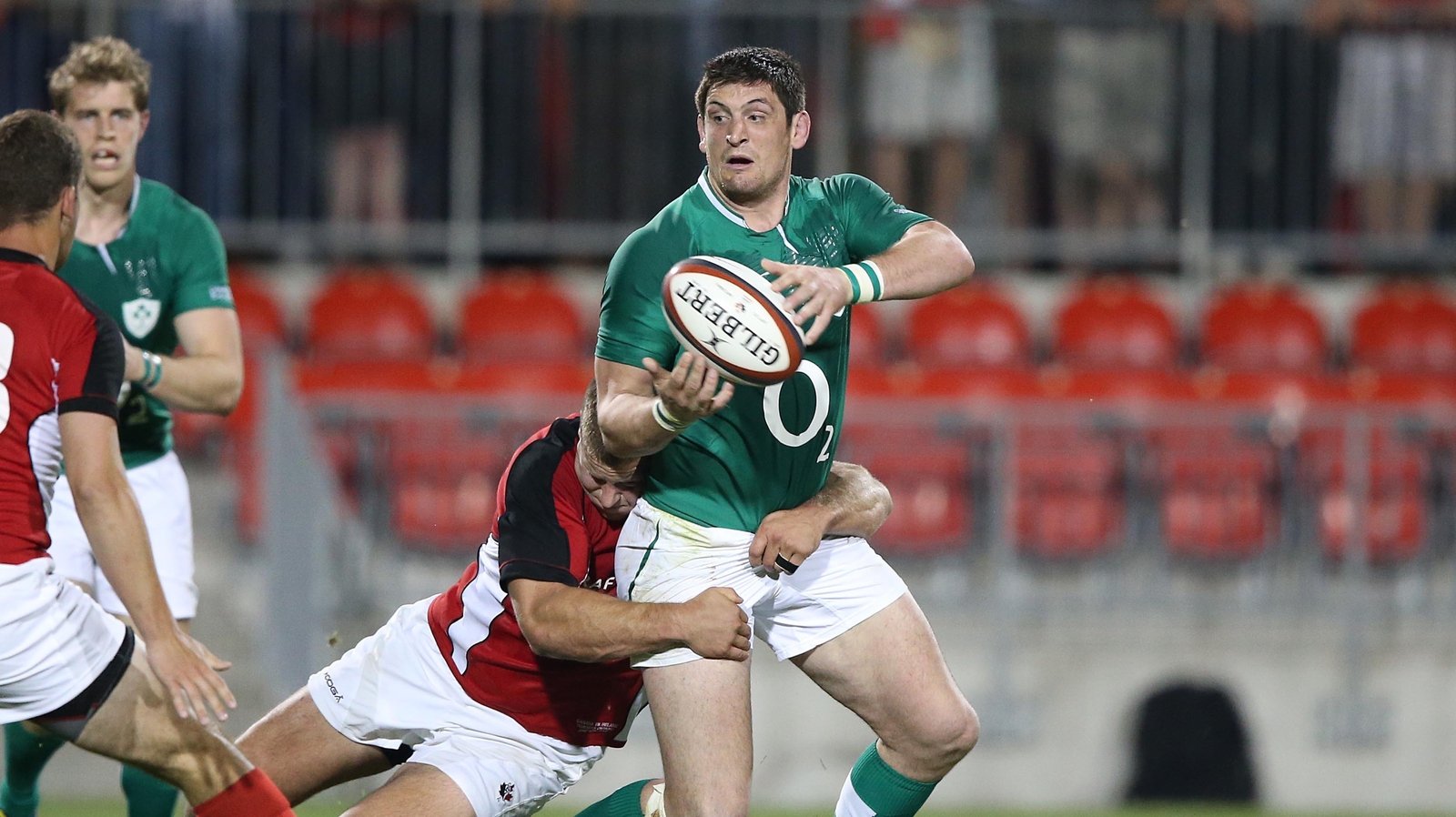 Taking on the Canadian cover in Toronto

"My first carry, I got smashed in the tackle. It felt like a 'welcome to international rugby'. I was delighted I got the 80 minutes as well."

'Green Fields of France' was the choice of song to mark the occasion and Fergus McFadden swapped his jersey with the Canadian inside centre Harry Jones to ensure a keepsake from the BMO Stadium.

"It was an absolute honour." 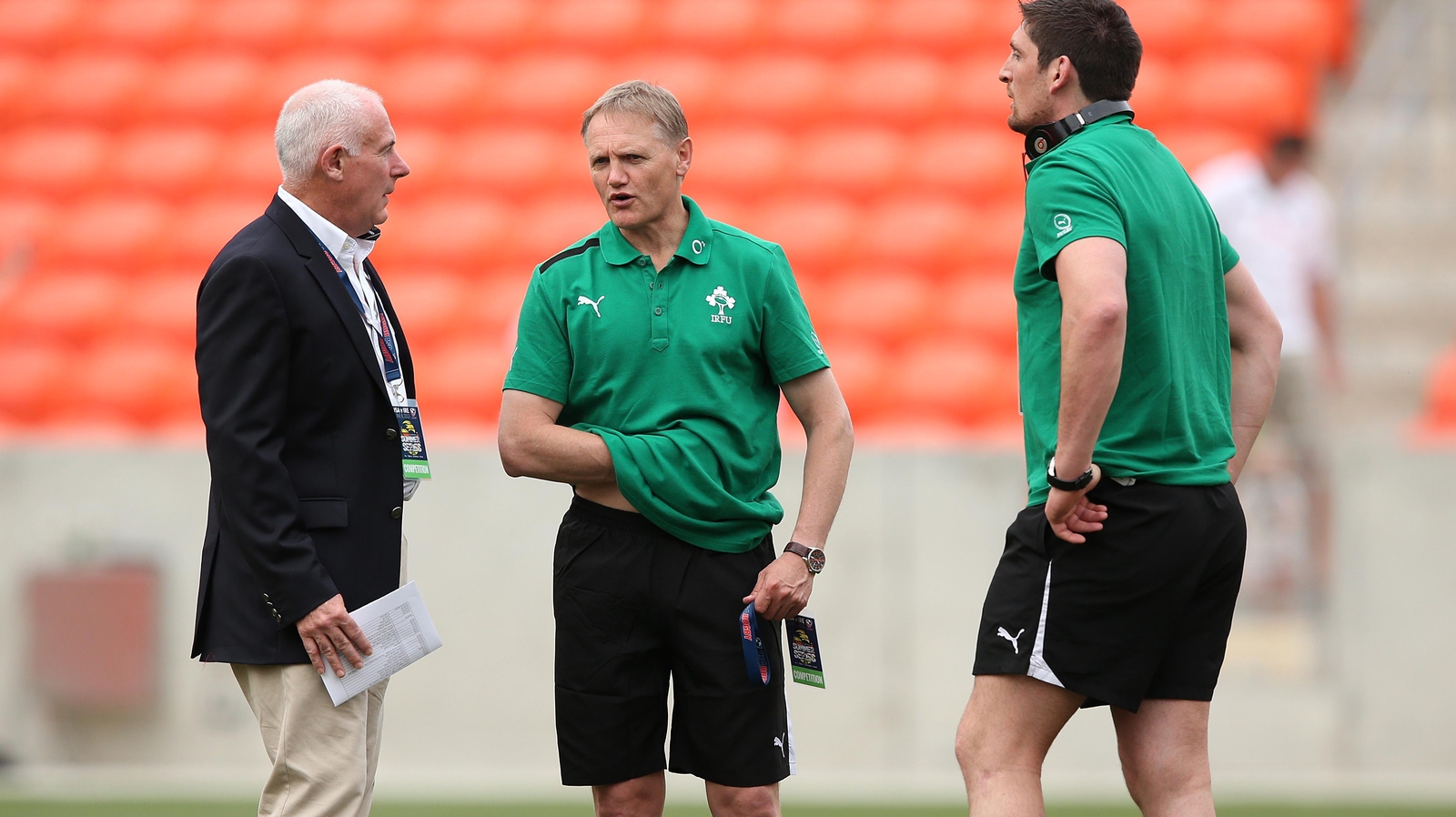 That unfortunately was both the beginning and the end in green. He still was an infrequent visitor to Carton House - "I think Joe called up everyone to keep people in the loop" – but it was about focusing on the final stages of his club career.

He remained in Munster's midfield, but the writing was on the wall in terms of his future, with the province looking to go a different direction.

"I would have loved to have won some silverware with Munster before I left. It wasn't meant to be," with three semi-final defeats in two seasons putting paid to that.

The four-year Munster plan fell by the wayside at the halfway point and Gregor Townsend brought the centre to Glasgow. The Scottish club went from runners-up to champions, but the move turned sour.

"Technically, Gregor was one of the best coaches I have ever had, but personality wise we just didn't click. I wanted to leave." 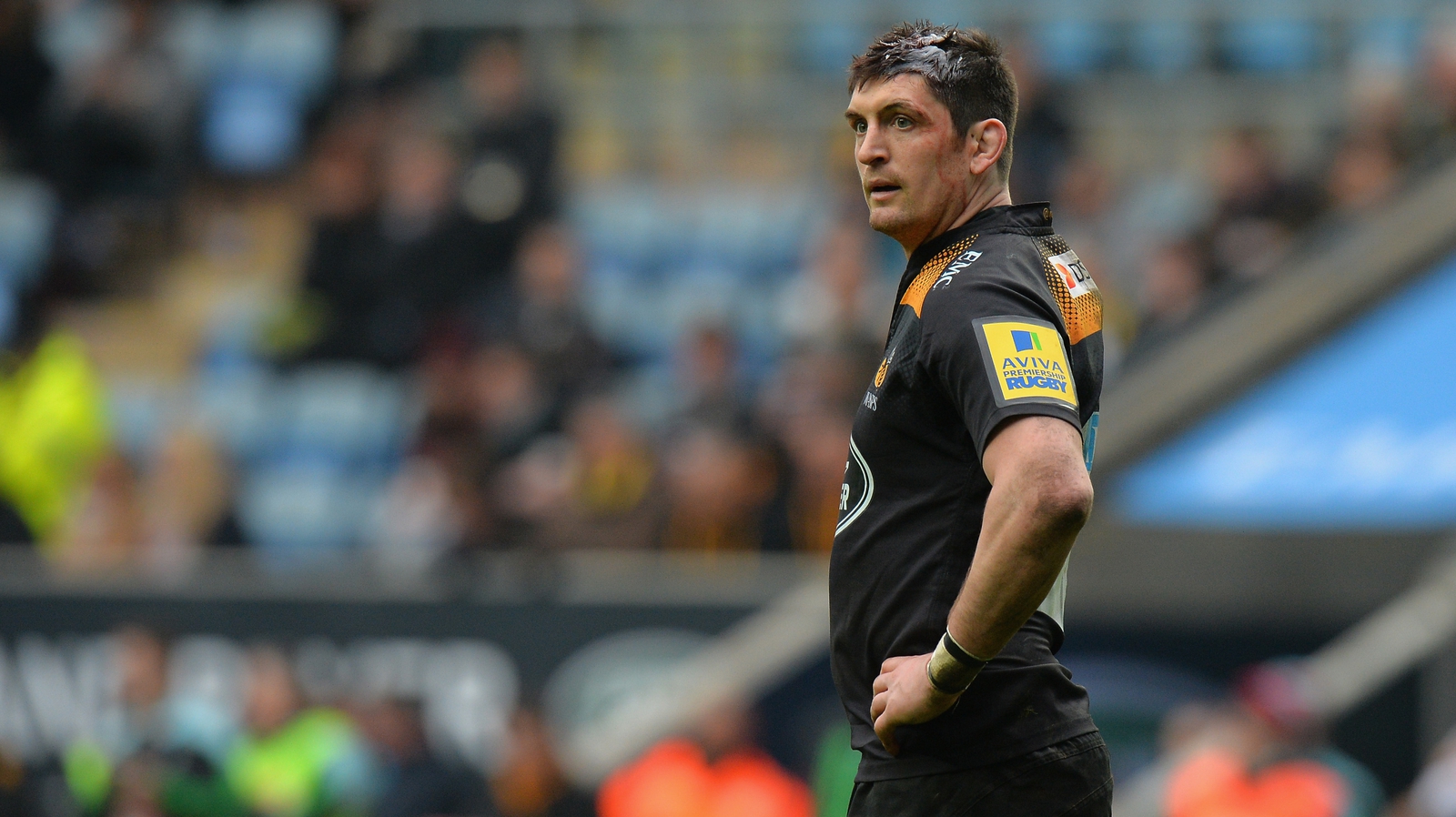 Wasps offered an 18-month contract and he grabbed the opportunity. Playing opportunities were limited, but Downey was able to cherish those final outings.

His second last game of professional rugby was against Northampton in January 2016. The week before he watched from the stand as his team-mates thrashed a callow Leinster side 51-10 as Leo Cullen made the adjustment to head coach, while the week, his swansong was the 9-8 defeat of Newcastle.

While plans were put in place for life post-rugby, the reality was still somewhat of a shock to the system.

I didn't like being a journey man, but now it stands to me

Downey completed a Business Management Systems degree in Cork, and felt the world of finance was his calling. He completed his QFA's and worked in London with an investment management company on his time off.

After hanging up the boots, the job in London became a permanent on, but between the commute and the nature of the job, it wasn't to be.

"I absolutely hated it. It wasn't the life I wanted to live."

Dublin became home again, but a sales role in a tech company also wasn't his passion. It was clear that he needed to be back in a sports environment and Esportif afforded him the opportunity to become a rugby agent.

"My turbulent career, in terms of how much I moved around, is beneficial for the role. I didn't like it. I didn't like being a journey man, but now it stands to me. I've been in so many situations. I know what it's like."