Connacht are into the quarter-finals of the Challenge Cup after a hugely spirited 33-27 victory in France against Bordeaux Begles.

Andy Friend's side will now face Sale Sharks, having faced the Premiership side twice in their pool, for a place in the last four.

The Westerners required a win to make the knockout stages but they were forced to go the well as their opponents, already out of the running, went all out in a frantic finale.

Connacht hung on to close out a terrific win and take their place in the quarters as runners-up to a Sale side who they will meet again in the final weekend of March.

The visitors started well. Matt Healy crashed over in the tenth minute and, Lucas Meret split the posts with a penalty for Bordeaux, the province got over again. 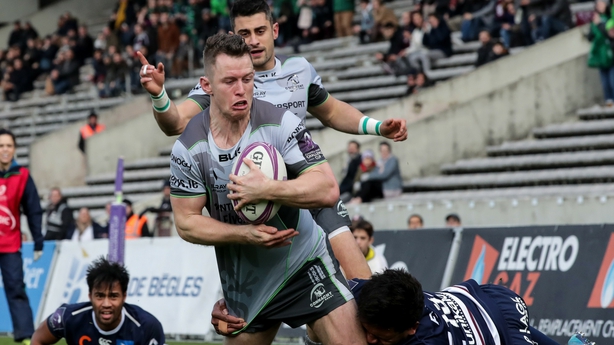 This time Quonn Roux dotted down with David Horwitz adding the extras. Eighteen minutes gone, 12-3 to Connacht, but the hosts would not lie down.

Afa Amosa's try plus a conversion and penalty from Meret left a point in it before Tiernan O’Halloran swung it the Irishmen's way again six minutes before the break. A ding-dong contest did not relent however and Jefferson Poirot then got over for Bordeaux to leave it 20-19 to Connacht at the break.

Baptiste Serin's 48th-minute try spelt bad news for Andy Friend's men, but they picked themselves up off the canvas to turn it around, Healy grabbed his second try ten minutes from the end before Jack Carty made an excellent break to wrap it up.

It wasn't easy, but they're there.

La Rochelle or Bristol Bears would await in the semi-final.