Munster coach Johann van Graan says he’d be surprised to see Conor Murray selected in this week’s Ireland squad as he continues his recovery from a neck injury.

And van Graan also denied that the province had approached former player Peter Stringer to come out of retirement during their recent scrum-half injury crisis, but confirmed an approach had been made to him last season.

"Last season just when I got here we were quite a few nines down at a stage as well and I had a quick chat to him [Stringer], but not this season," said van Graan.

Murray hasn’t played since the third Test of Ireland’s summer tour of Australia – four months ago today – and the Munster coach doesn’t expect him to be fit for the Irish November Tests against Italy, Argentina, New Zealand and USA. 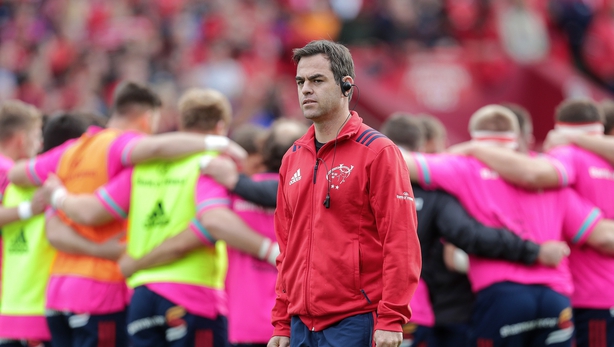 "It would (be surprised if Murray was in the Ireland squad), because he is still a bit off being ready, but Joe (Schmidt)’s and David (Nucifora)’s communication has been fantastic to me since the day that I arrived.

"We are all very aligned and I believe so are all the provinces. That’s fantastic about Irish rugby. Everybody just wants the best for Conor so whenever the medical staff clears him we’ll all be on the same page.

"Look, I don’t want to speculate on what’s the best for him. We get led by our medical team. Obviously, Conor wants to play, he is the most important, but he also knows his body and he is very important for Munster and very important for Ireland, so we’ll keep doing the best that we can for him."

There was positive update regarding Tommy O’Donnell’s leg injury, and x-rays have confirmed that the flanker did not break his leg, but he has sustained some serious ankle damage. Hooker Rhys Marshall is awaiting the results of a scan on his hamstring injury, while Niall Scannell (ankle) is expected to return to some running this week. Keith Earls could be ready in time to face Glasgow this Saturday at Thomond Park though.

"There is a chance. He has got to start running today. The medical staff said to me that we’ll have a look at how that goes. We can put him into team training and I think we’ll have to see how it looks on Thursday.

"He is raring to go, he has only played two games this whole season. He is fired up and hopefully that hammy comes through now. he’s one of our best players and one of Ireland’s best players. We’d love to have him on the field. He is just such a special player. 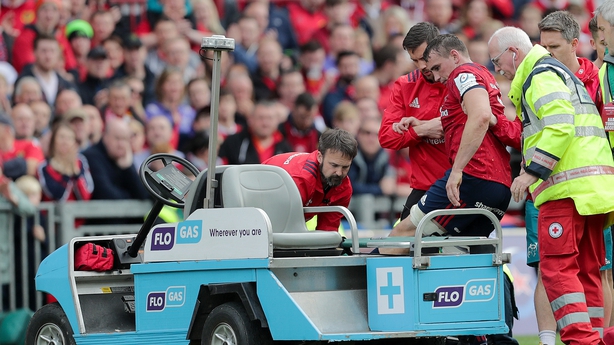 "It’s great news (for O’Donnell). We take that as a big positive. Medical staff looked at what happened after the game and the pain and how they took him off. it’s brilliant news. Just look at that ankle, the damage will be significant.

"Anything I get now positive is great. If you just look at our loose forwards at this stage: Tommy out, Jack O’Donoghue out, Dave O’Callaghan out, Conor Oliver out, Arno (Botha) possibly out, and then Pete (O’Mahony), CJ (Stander) and Tadhg (Beirne) possibly going to Ireland leaves u really thin at this stage."

The Ireland squad will be named on Wednesday and at least ten Munster players are expected to be named in Schmidt’s squad. With double digit injuries to cope with it leaves Munster desperately short of experience for Saturday’s clash with Warriors and their trip to South Africa a week later, but van Graan wants to use it as a chance to test the extents of his squad.

"Yeah. I definitely won’t have everyone available (this weekend). There’s been communication from the Irish camp and I do want to stress the communication has been fantastic from Joe and that’s something I respect and that’s why the national team are ranked number two in the world, because of the Irish system. There will definitely be player welfare this weekend."

And will Tyler Bleyendaal make his first appearance since February’s win over Glasgow?

"Possibly. We’ll do what we believe is the best for Tyler, gradually bring him back. He’s training well, putting a bit of lead into his legs, putting him through his paces but we’ve also got Keats and JJ and Bill and over the next two weeks we’ll make a few changes to the team.

"And we’ve got to fly to South Africa next Monday. So yes, Tyler might get some game time as we look to freshen it up over the next two weeks."