Joe Schmidt was delighted to come away with a hard-fought victory against Australia today that sets up a winner takes all showdown in Sydney next Saturday.

Ireland held off a late Australian rally to win 26-21 in Melbourne and level the series, despite going seven points down inside the second minute after Kurtley Beale raced clear.

"They got the seven points very easily at the start. That was really disappointing," head coach Schmidt told RTÉ Sport. "We got disconnected in defence.

"We obviously tried to repair that at half-time but it's a bit late then when they've gone 7-0 up so quickly."

Ireland proceeded to score 13 points without reply while Marika Koroibete was in the sinbin for a tip tackle on Rob Kearney but Australia went in just two down at the break after Cian Healy was yellow carded and a penalty try awarded for collapsing a maul.

The visitors pushed on after the break though, Furlong powering over after Keith Earls and Jack McGrath had efforts ruled out by the TMO for a knock-on and double movement respectively, and Johnny Sexton adding two penalties. 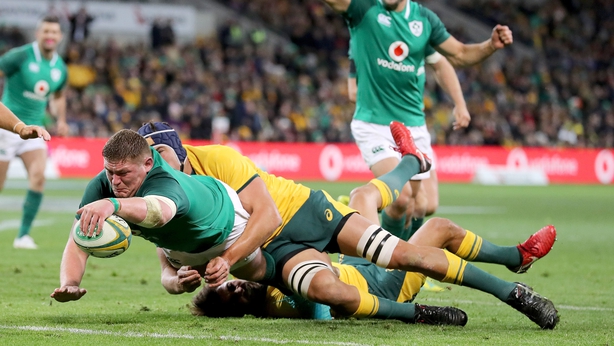 "But I felt they got their penalty try very easily as well. I'm not sure exactly what happened but it was a pretty big call, considering the penalty count was two to one in our favour.

"So it was 16-14 and I felt we had had quite a bit more of the game. But for us, the third quarter was probably the most pleasing.

"We kind of broke them on the edges. We broke them through the middle. There was frustration not scoring but once Tadhg got over it gave us a lift and with the extra three points that we'd already got, it was looking extra good but you can't keep the Wallabies down.

"If you give them the opportunity, they have so many athletes that love to run and move the ball, and we were chasing shadows for a little while."

Ireland weathered a late storm while McGrath in the bin for a deliberate knock on and were even forced to replace lock Devin Toner with back Joey Carbery.

Taniela Tupou's try ensured a nervous last 90 seconds but Ireland held on for a deserved victory.

"There was a level of frustration that we just couldn't quite seem to put them away," admitted Schmidt.

"But then we put ourselves under pressure. We were down to 14 men at the end there, Joey Carbery coming on to replace Devin Toner - they're very similar in the lineout I suppose! - and he did a super job defending. Thankfully we didn't have any setpieces in the last few minutes.

"Ideally, we don't want to be in that situation.

"We just have to see who we've got to glue together and make sure we can be as good as we can be in Sydney because I know that they're going to come back looking to win the series.

"It's great that it's still alive and I think the people that are there are going to see a fairly titanic struggle."