Saracens rugby director Mark McCall said that Vunipola suffered an arm injury that forced him off at half-time as the Champions Cup holders were held 15-15 by Pool Two rivals Ospreys.

Vunipola, playing only his second comeback game after a three-month absence with knee trouble, could now be a concern for the start of England's Six Nations campaign, which begins against Italy in Rome on February 4. 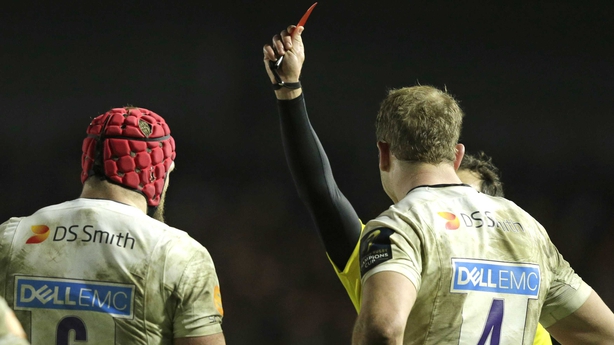 "He (Vunipola) has an arm injury which we will obviously explore right away," said former Ireland international McCall.

"I don't know what the extent of the injury is.

"(Michael Rhodes) has pulled a hamstring, so we had quite a lot to contend with. Our starting back-row were gone by half-time, and Jackson (Wray) went before the game, so there was a lot to deal with.

"But ultimately, it came down to the scrum today. It was just not good enough."

Whats done is done, but just want to publicly apologise to @Jamiehuwroberts. Never my intention to hurt another player. Got my height wrong, paid the price, which happens. You know me, never one to do anything subtly. Credit to @Harlequins and apologies to @WaspsRugby fans

Saracens now realistically need a bonus-point victory over Allianz Park visitors Northampton next weekend to have any chance of progressing as a best runner-up.

But even then, their European title hat-trick bid staying alive will still hinge on results elsewhere, while Ospreys must beat Clermont Auvergne in France to have any chance of progressing.

McCall added: "We knew beforehand what the pools were, but it is completely out of our hands now.

"It was scrappy, tight, stop-start game with the weather being the way it was, but when it came down to penalty count at scrum-time, we lost that really heavily and that was the fundamental problem.

"It is not in our hands. If they (Ospreys) beat Clermont next week, we are out of the competition if other results go (against us), and maybe we don't deserve to be in the competition because we have lost back-to-back games against Clermont and drew a game today.

"We have probably not been quite good enough in the competition, although we started it well.

"The Clermont home game happened (Saracens lost 46-14), and we had to deal with it. As a group, we dealt with it and did pretty well from there on, but that was probably the one which we will look back on and regret."

Ireland play England on the final day of the Six Nations on 17 March.