Dragons and Ulster fought out an dramatic Guinness Pro14 League draw at Rodney Parade with visiting fly-half Christian Lealiifano both hero and villain.

First Dragons looked to have won it through Ashton Hewitt's late try before Ulster hit back through Lealiifano - but the Australia international missed a straightforward conversion which would have won the game.

Craig Gilroy scored twice for Ulster, with scrum-half Paul Marshall also crossing. The referee also awarded a penalty try while Lealiifano kicked a penalty and a conversion but was crucially off target at the death.

Dragons centre Jack Dixon handed an early initiative to Ulster when he was sin-binned after just four minutes for a high tackle and with the man advantage, Ulster took their chances and went 8-0 up.

Lealiifano landed a 30-metre penalty from Dixon's indiscretion, and some good work down the right from Marshall, Louis Ludik and full-back Charles Piutau saw Gilroy race in.

Back to a full complement, the home side hit back by moving 15-8 ahead. 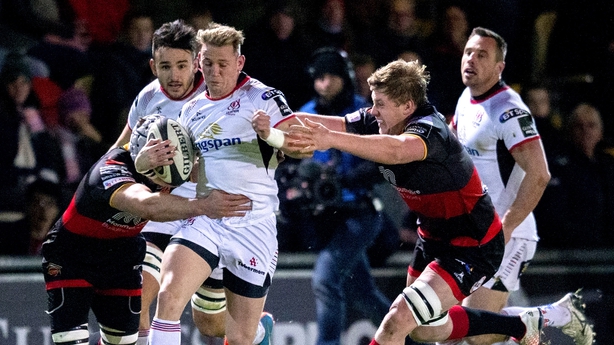 Screech was at the back of a driving maul over the Ulster line for the first try, which Henson converted before adding a penalty after a great charge down the middle from captain Ollie Griffiths.

A neat grubber kick from Dixon to the corner then saw Hewitt touch down but the ding-dong battle took another turn when the Dragons pulled down a maul on their line for referee Marius Mitrea to award a penalty try and send the teams into the half-time break locked at 15-15.

Marshall restored Ulster's lead. Number eight Nick Timoney was stopped a metre short after a run down the right but his scrum-half leant over the ruck on the blindside to score.

And by the hour, Ulster had their try bonus point and put themselves 12 points clear when Gilroy nabbed his second touchdown, with Lealiifano adding a touchline conversion.

Any thoughts this was game over, though, were soon dismissed as the Dragons came fighting back with two tries in six minutes.

Belcher drove over from an attacking line-out and a blistering move down the left by Rosser saw him pass inside for O'Brien to score their bonus-point try, with Henson adding a touchline conversion that levelled the match.

And in the final two minutes, Henson fed O'Brien in the Ulster 22 who passed wide for Hewitt to nab his second.

It went unconverted, which could have been costly when Lealiifano scored near the posts for Ulster's fifth try but, with a kick to win it, he also missed to end a breathless game.