Charlie Ewels, Piers Francis and Will Collier scored their first international tries as England wrapped up a 2-0 series win over Argentina with a 35-25 victory in another breathtaking Test match.

After snatching a 38-34 win in the first Test in San Juan, a youthful England were once more pushed all the way by the Pumas, who thrived on the raucous atmosphere generated by a near-capacity crowd of 29,750 at Estadio CA Colon in Santa Fe.

England could only breathe easy when man of the match George Ford coolly put over a drop goal seven minutes from time, to add to his five successful kicks off the tee.

The tourists were also indebted to the experience of Chris Robshaw, Mike Brown and Joe Launchbury as they secured an eighth successive win over the Pumas, who will provide the next opposition for Eddie Jones' men in the autumn internationals.

Flanker Sam Underhill caught the eye as he became the 11th player to be capped on the tour while Ford and Launchbury both demonstrated they would not look out of place in a Lions team, a prospect not likely to happen after Warren Gatland opted to call up replacements from Wales and Scotland in a move criticised by Jones.

Captain Dylan Hartley became the third most capped England international of all time when he ran out for the 86th time.

The second Test began as the first one finished, with both sides happy to play at a frantic pace, and England made a dream start with a fifth-minute try.

After securing their own line-out ball, Launchbury made inroads into the Argentina defence and produced a neat offload to get his second-row partner Ewels over the line.

Ford, who kicked seven goals from eight attempts in San Juan, added the conversion to make it 7-0 but the Pumas were level four minutes later when their enterprise in running a penalty paid off with full-back Joaquin Tuculet forcing his way over out wide through the tackle of Marland Yarde.

Ford restored his side's lead with a penalty but Nicholas Sanchez struck twice in quick succession to make it 13-10, the first of which was initially waved away by the touch judges but awarded by referee John Lacey after consulting with the television match official. 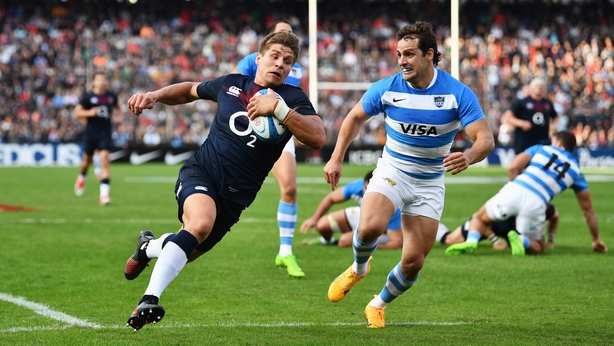 England's forwards were struggling to cope with the Pumas' scrum, their traditional strength, and Sanchez missed a chance to stretch his side's lead when he was off target with a 29th-minute penalty attempt.
Ford, on the other hand, was as accurate as ever with his next kick at goal after Tuculet was penalised for not releasing the ball.

That levelled the scores and England regained the lead nine minutes before the break thanks to superb opportunist play from full-back Brown, who plucked the ball out of the air following Sanchez's mis-placed kick and broke clear to get the supporting Francis over the line.

Ford, for once, was wide with the kick but England were happy enough with an 18-13 interval lead.
Tempers flared early in the second half when the Pumas took exception to a high tackle on Tuculet from England winger Jonny May and the locals were cheering even louder after 52 minutes when Francis' poorly-judged kick rebounded off the legs of Argentina flanker Pablo Matera, who showed nice footwork to hack the ball on and regather to touch down for his side's second try.

Sanchez was unable to add the conversion to leave the scores level once more and England struck again five minutes later following a handling error from Jeronimo de la Fuente which Brown was quick to seize upon to get scrum-half Danny Care racing away.

Ford's fourth goal opened up a seven-point gap but it vanished just as quickly as Argentina winger Emiliano Boffelli went through a gaping hole on the England right to score his second try in as many matches, Sanchez converting to lock it up at 25-25.

Play continued to swing from end to end but England then produced the decisive score from close quarters after 65 minutes as Collier was driven over the line, just moments after entering the action as Jones began to empty the bench.

Ford, whose game management was again exemplary, kicked his fifth goal from six attempts off the tee and added his drop goal seven minutes from the end to give his side a 10-point cushion which saw England home to another victory.