Lansdowne will enjoy the festive period that little bit more than their Division 1A rivals after defeating Young Munster 30-24 in a supercharged top of the table clash.

Mike Ruddock's men hold a four-point lead at the league's halfway point, with only third-placed Young Munster able to match the headquarters club's haul of six try-scoring bonus points in the nine rounds so far.

Despite falling to their second straight defeat, the Cookies will take heart from a performance that earned them two bonus points in the end.

Gearoid Prendergast's charges will regroup and look to make up lost ground against Lansdowne in their rematch next month. 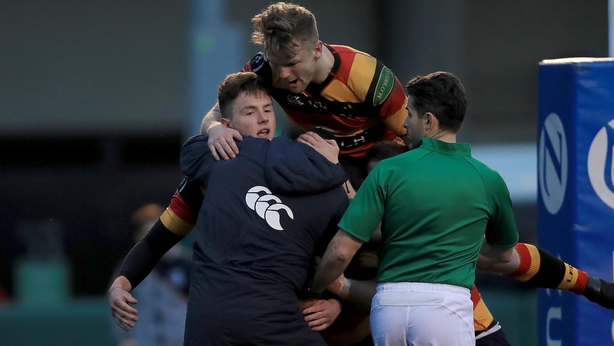 Three first half tries, one of them converted by Scott Deasy who also kicked a penalty, had the hosts leading 20-12 at half-time on the Aviva Stadium's back pitch.Influential lock Willie Earle, who was a real workhorse in the home pack, and pacy backs Ferdia Doherty and Daniel McEvoy all crossed the whitewash, with winger McEvoy running in his fourth try of the campaign.

Craig O'Hanlon and Calvin Nash were Munsters' first half try scorers, and winger O'Hanlon's second of the afternoon wide on the right suddenly had the Limerick men just three points in arrears.

There was very little between the sides as fizzing winger Marc O’Keefe's third try in two games for Lansdowne was cancelled out by a Jack Harrington effort at the other end. However, out-half Deasy put the hosts just out of Munsters' reach with a closing penalty.

Centre Sean Coughlan limped out of the Belvedere team before kick-off at Anglesea Road, but the home side hit the ground running and out-half Crosbie’s delicate chip almost produced a fourth-minute breakaway try.Mary’s were held up and turned over from a promising maul opportunity before Crosbie opened the scoring in the 17th minute, landing a long range penalty with just inches to spare.

Clear-cut scoring opportunities were few and far between during a tight and attritional first half, but ‘Belvo struck seven minutes before half-time when excellent approach work by Crosbie led to Brandon diving over in the left corner.

The try was unconverted from the touchline and although Mary’s were unable to eat into the eight-point deficit with in-form lock David O’Connor just held up, the presence of Leinster ‘A’ starlet Jordan Larmour in the visitors’ youthful back-line offer them hope.Mary’s let Belvedere off the hook after the restart, though.

With Crosbie and second row Jack Kelly being treated for blood injuries, the Templeogue side looked set to score but young out-half Conor Dean’s attempted pass towards David Fanagan and Conor Hogan was overcooked.

Dean then watched his 40-metre penalty attempt rebound off the post and ‘Belvo showed their clinical edge in attack again in the 61st minute, working the ball wide for Brandon to finish smartly in the left corner.Crosbie brilliantly added the extras from out wide for a 15-point advantage and although ‘Belvo lost forwards Matt Ritani and Karl Miller to yellow cards, they finished the game with a clean defensive slate.

Seven tries - six of them converted - saw Cork Constitution hit the half-century mark against an overworked UCD side, with Brian Hickey’s men enjoying a 50-25 bonus point victory at Temple Hill.

Constitution were missing their top try scorer Shane Daly (five tries) who is away in Dubai with the Ireland Sevens squad this weekend, but they more than made up for his absence in another dominant display.

The Leesiders’ sixth straight success has moved them up to second in the Division 1A table, and they were well on their way when leading 29-13 at half-time.Con put 58 points on the students in their most recent meeting at Belfield last February and they were 10-0 up in as many minutes today.

Tomas Quinlan fired over a fifth-minute penalty before prop Liam O’Connor followed up with an unconverted try in the corner.UCD out-half Ciaran Frawley kicked two penalties - one from close to halfway - and also converted winger Tom Fletcher’s try, but Con pocketed their bonus point by the break, a 17th minute penalty try for a collapsed scrum being added to by efforts from backs JJ O’Neill and Quinlan.

The home side dominated second half possession with experienced replacement Darragh Lyons claiming their fifth try of the afternoon. The scoring dried up until the sides swapped four tries during a breathless final 10 minutes.UCD gained some consolation with teenage centre Tommy O’Brien’s fourth league score and replacement Gordon Frayne also touched down in the 79th minute.

Con ran out ‘double scores’ winners in the end, winger Rob Jermyn getting on the scoresheet in the 77th minute and then, from the restart after Frayne’s effort, home centre Ned Hodson broke clean through to dot down by the posts.

Clontarf put together their most complete performance of the season so far to record a comprehensive 33-0 win over a below-par Dublin University at Castle Avenue.Very little went right for Trinity on the day as defending champions 'Tarf made it two victories on the bounce, climbing back into the top half of the table ahead of the Christmas break.

Hooker Bryan Byrne has not played for Leinster since September and he will hope his provincial coaches take note of his performance here. He had two excellent first half breaks, the second of which led to a 25th minute try for centre Matt D’Arcy which broke the deadlock.

Byrne was also a big part of 'Tarf's dominant scrum, but they were unable to press that advantage home as the first half ended 7-0 in their favour. Trinity had a missed penalty attempt by out-half James Fennelly and a yellow card for winger Bryan Mollen.

Resolute defending from the students kept them very much in contention, a brilliant move involving D'Arcy and Mick McGrath almost seeing 'Tarf score on the stroke of half-time before Trinity covered the danger.However, the visitors blundered when knocking on straight from the restart and 'Tarf quickly broke through, feeding winger Rob Keogh for a well-finished five-pointer wide on the right.Trinity's resistance lessened after Michael Brown joined his centre partner D'Arcy on the scoresheet, giving the north Dubliners a 19-point buffer in damp and muddy conditions.

The bonus point try followed when scrum half Peter du Toit outfoxed the cover at a close-in ruck, sniping through in impressive fashion with the students down to 14 men.

The 'Tarf pack's scrummaging power earned them a penalty try, with Keogh adding his fourth successful conversion, and Brown went close to scoring his second of the day late on. This chastening defeat - their third in four games - will linger for Trinity before they get a chance to gain revenge on Andy Wood's men in the 28 January rematch.

Winger Steven McMahon had a dream outing at Dooradoyle this afternoon as Garryowen swept their way to a convincing 41-12 bonus point win over bottom side Terenure College.

McMahon, a 21-year-old Munster Academy back, scored a hat-trick of tries with Conor Oliver and Dave McCarthy also touching down in addition to a second half penalty try.The Light Blues pocketed their bonus point by half-time, turning around with a 29-12 lead.

Tries from flanker Oliver, who has seen recent senior action with Munster, and Terenure centre Marc Hiney had squared things up at seven-all after 12 minutes.However, once McMahon notched the first of his tries in the 21st minute, the floodgates unlocked and captain Neil Cronin's penalty gave the hosts the breathing space to open up the game at every opportunity.McMahony (38 minutes) and centre McCarthy, just on the whistle, gave Conan Doyle's charges a comfortable interval lead as they chased their third league triumph on the trot.

They will take in the Christmas break in fourth place, with local rivals Young Munster five points ahead of them.The scores kept coming in the closing 40 minutes, both defences offering up space as bodies tired. There was a penalty try apiece and Waterford man McMahon completed his hat-trick to make it 41-19.

Cronin converted the penalty try to add to his nine first half points.Terenure, who host Garryowen in the return leg on 28 January, remain adrift of second-from-bottom Mary's at the wrong end of the table.

At least they picked up a late try-scoring bonus point, replacement Conor Weakliam crashing over to give his side something tangible from a very entertaining game. 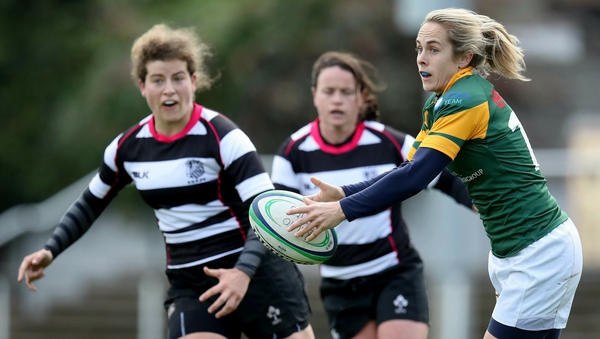 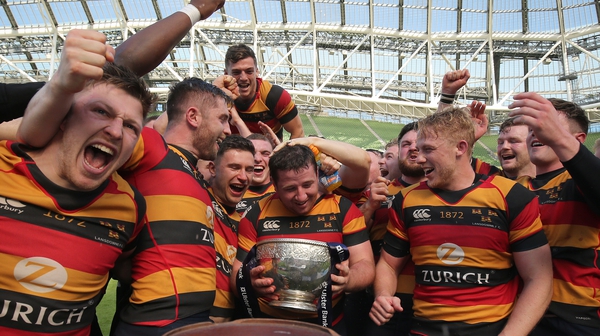 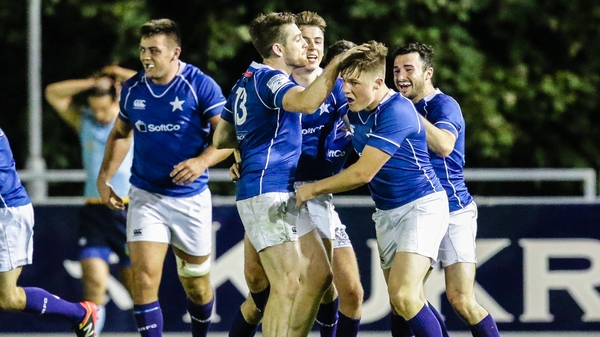 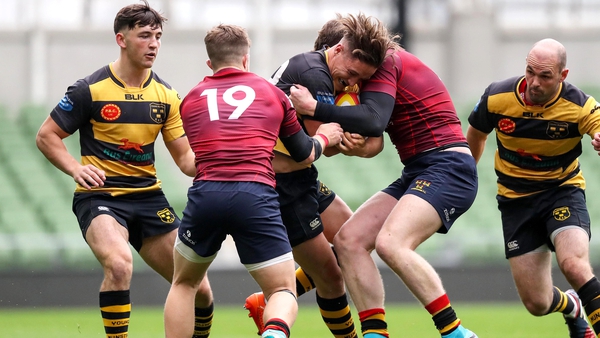 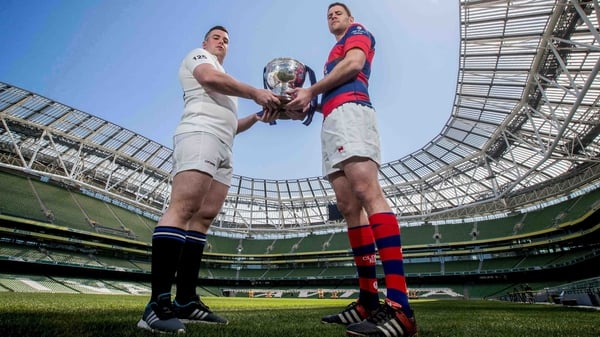