South Africa came from behind with two tries in the last 10 minutes to start the 2016 Rugby Championship with a 30-23 win at home to Argentina in Nelspruit.

Full-back Johan Goosen and number eight Warren Whiteley crossed late on to avoid a repeat of last year's shock win for Argentina in Durban, the first time the Pumas had beaten the Springboks in what is now 23 meetings between the teams.

Ruan Combrinck crossed out wide to give the hosts an early lead and fly-half Elton Jantjies - filling in for the injured Handre Pollard and Pat Lambie - kicked the first of his three conversions and three penalties.

Two Nicolas Sanchez penalties pulled it back to 10-6 when Argentina, temporarily down to 14 men with Manuel Montero sin-binned, went ahead as Matias Orlando finished an impressive team try that stand-off Sanchez converted to put the Pumas in front at the break.

After the two fly-halves exchanged penalties Santiago Cordero finished off some patient build-up play to put Argentina 21-13 up once Sanchez had converted.

South Africa almost immediately hit back through Goosen and a conversion followed by a penalty from Jantjies levelled the scores with six minutes to go.

Late Springbok pressure proved decisive thanks to Whiteley, with Jantjies adding the extras and the Pumas having to settle for a losing bonus point.

Earlier in the day, New Zealand coasted past Australia in Sydney. 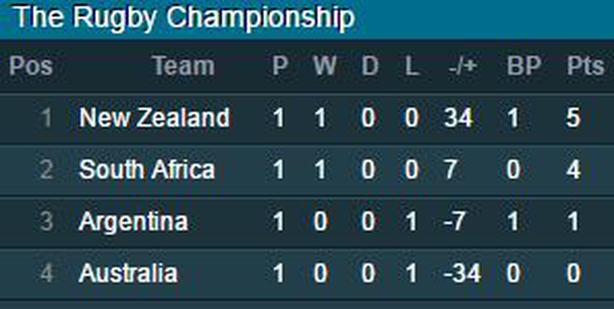