Ireland flyhalf Paddy Jackson was given big shoes to fill in last weekend's test against South Africa but emerged from a searching examination with flying colours and is now key to their hopes of clinching the three-match series.

Jackson excelled in place of an injured Jonathan Sexton in the pivot's role to steer Ireland to a remarkable 26-20 win at Newlands, the team's first triumph against the Springboks in South Africa giving them a 1-0 lead in the series.

"With some really good territorial play, we managed to earn possession and we managed to turn that possession into points," he added of his side, reduced to 14 men for an hour following the dismissal of flanker CJ Stander for dangerous play.

"That certainly helped us gain confidence, we had a lot of players who haven't had a lot of time with us and it tends to be that your leaders, they tend to have the kind of contagious effect that you miss a bit when you don't have them.

"For guys like Paddy, who stepped up, I thought they did a super job."

The Ulster flyhalf, capped 14 times after Saturday's test, has been a regular understudy to Sexton, who missed the tour with a shoulder injury.

The absence of Ireland's charismatic conductor left most observers predicting a tough time for the tourists but it was Ireland who defied logic to win the opener despite being a man down for most of the match.

"It was an unbelievable win for a team that hasn't been together all that long," said Jackson, who contributed 13 points with the boot.

"It shows the character of the country and the lads who stepped up. We all just backed each other and got the win."

Jackson's kicking could again prove crucial in Saturday's second test at Ellis Park, where the high altitude could work to his advantage. 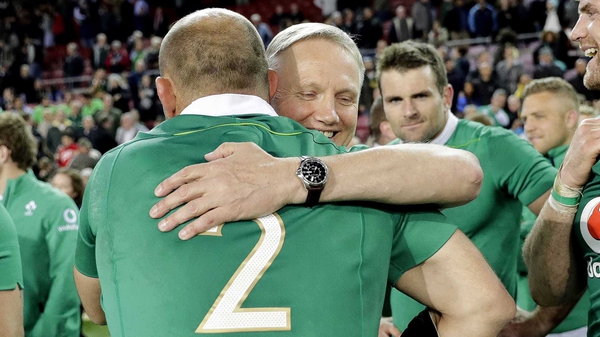