Ireland have defeated Italy 14-3 in their Women's Six Nations clash in Dublin thanks to tries from Lindsay Peat and Paula Fitzpatrick.

Prop Peat touched down seven minutes before half-time to give Ireland the lead after the Italians had gone 3-0 up through the boot of Michela Sillari.

Captain Niamh Briggs added the necessary extras to give the home side a 7-3 lead at the interval.

Ireland's strength in depth showed in the second-half, with back rower Paula Fitzpatrick crossing over after 64 minutes to put the result beyond doubt.

Tom Tierney's side, who like their male counterparts are out of the Six Nations title race, will wrap up their campaign at home to Scotland next Sunday.

Tierney handed debuts to Kim Flood at full-back and Liz Burke on the right wing, while centre Claire McLaughlin's second half introduction brought the number of new caps to 14 since last November.

Managment are keen to expand Ireland's player pool ahead of the Women's Rugby World Cup on home soil next year.

Ireland started slowly, and it was the second quarter before they really settled down after the fired-up Italians had dominated the initial exchanges.

Italy's streetwise forwards lorded the early possession and territory, going close from a powerful maul five metres out and then turning over an Irish scrum in front of the posts.

A Ciara Cooney lineout steal relieved the pressure slightly, but Ireland's discipline at the breakdown was poor and Peat was punished for hands in the ruck with Michela Sillari nailing a 12th minute penalty for the opening points.

Ireland were very fortunate to avoid the concession of a try towards the end of the first quarter, a quick tap from the Azzurre catching them off guard and they went close in the left corner after Nikki Caughey was charged down.

Ireland's more experienced players then stepped up, with the returning Alison Miller and Sophie Spence - playing at number 8 - spearheading a break from deep, but a general lack of cohesion, including a series of frustrating knock-ons, meant they were unable to build much momentum in attack. 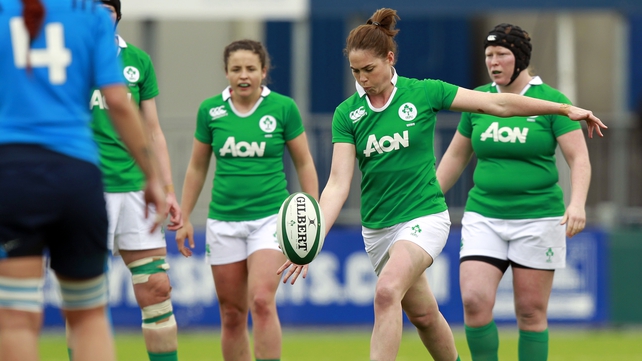 That was until flanker Cooney blocked an Italian clearance kick, sparking Ireland's best attacking spell of the half.

Sene Naoupu was hauled down just short by Manuela Furlan, and Spence gained a couple more metres before Peat - making her first start for Ireland - muscled her way over just to the right of the posts.

Niamh Briggs added the extras and 7-3 is how it stayed up to the interval, the captain turning down a long range kick at the posts before Italy again got in first to a couple of crucial breakdowns.

Handling errors continued to blight Ireland's play on the resumption, with an off-colour Briggs particularly guilty, and danger woman Miller was well marshalled out wide by the consistently well-positioned Maria Magatti.

A missed touchfinder from a penalty also robbed the girls in green of an advanced position, and a knock-on by Marie Louise Reilly spoiled a decent spell of carrying from the pack in the Italian 22.

Briggs' centre partner Naoupu, Ireland's most effective runner with ball in hand, was held up soon after, but Tierney's charges made a penalty advantage count from the resulting lineout as replacement Fitzpatrick was driven over in the right corner.

Nora Stapleton, who was also sprung from the bench, added a well-struck conversion for 14-3.

That should have set Ireland up for a strong finish, but once more a combination of resolute Italian defence and Irish inaccuracies in attack meant that the try count remained at two.

Ireland's ability to convert pressure into points was a hallmark of their play when winning two Championships in the last three years, but it has been sorely lacking for this new-look side so far this season.

They missed a couple of gilt-edged changes in the dying minutes, the otherwise impressive Flood taking the wrong option by straightening up when Burke was free out wide, and then replacement Claire Molloy was frustratingly held up short in the final play.

Newcomers Flood and Burke, who did very little wrong - particularly in defence, were among the positives on the day, as well as a plentiful return from the set piece where Peat, Cliodhna Moloney, Ailis Egan and Reilly were all prominent.