Ulster bagged an essential win for their Guinness PRO12 campaign by beating Edinburgh at a rain and wind-lashed Kingspan Stadium.

But a fifth victory from nine league games came at a cost, with four players suffering injuries.

The home side lost Iain Henderson, Darren Cave, Dan Tuohy and Peter Nelson to various problems, with Henderson's early issue - believed to be hamstring-related - being of particular concern.

And with their back-to-back European Champions Cup meetings with Toulouse coming up, Ulster head coach Les Kiss now looks to have huge problems in keeping alive his side's interest in that competition.

Ulster got their much-needed four points, to avenge losing at Edinburgh earlier in the season and climb to fifth place, through a first-half try for Rory Scholes along with a penalty try and two Paddy Jackson conversions after playing with the elements at their backs.

The Scots, trailing 14-0 at half-time, came back through a score from Cornell Du Preez and a Jack Cuthbert conversion but neither side was then able to add any further points.

It was a frustrating end to the day for Edinburgh, following the earlier announcement that head coach Alan Solomons has extended his contract until the end of next season.

There were worrying scenes for Ulster early on as Henderson was felled with a leg injury and the game was held up for several minutes before the Ireland international was taken off in the medical cart.

With Henderson's injury striking as he pressurised Phil Burleigh on the Edinburgh line, Ulster - once play resumed after Henderson's removal - secured the lineout and drove for the Scots' line with Ruan Pienaar adjudged by the TMO to have been illegally impeded from scoring and a penalty try being awarded. Jackson converted the fifth-minute score.

Shortly after Cuthbert was short into the wind with a penalty attempt, Ulster scored again when Rory Scholes burst through to dot down near the sticks.

Jackson also converted the Ulster winger's 10th-minute try and the home side led 14-0.

Ulster then lost full-back Nelson to injury, with another backline reshuffle taking place which shortly afterwards saw Scholes also taken off with a head injury forcing Paul Marshall to be brought on to cover wing until Scholes was cleared to return.

Ulster were unable to score again but led convincingly at the turnaround.

Eight minutes into the second half, Edinburgh got their first score after Burleigh chipped through for Du Preez to get the touchdown in the corner, and Cuthbert added a superb conversion to cut Ulster's lead to seven.

Ulster needed to respond and Stuart McCloskey wriggled over in the 53rd minute, but with no obvious view of the ball referee Ian Davies had to rule out the score after consulting with the TMO.

From the scrum, Clive Ross was held up over the line and Jackson's subsequent half-break led to nothing as well. Then, just to add to Ulster's woes, Tuohy was helped off the field.

With conditions deteriorating further, Ulster kept battering away and finally seemed to have made another breakthrough when Luke Marshall burst through to score in the 71st minute, only for the TMO to intervene after Chris Henry obstructed a defender, and the home side were unable to add to their total. 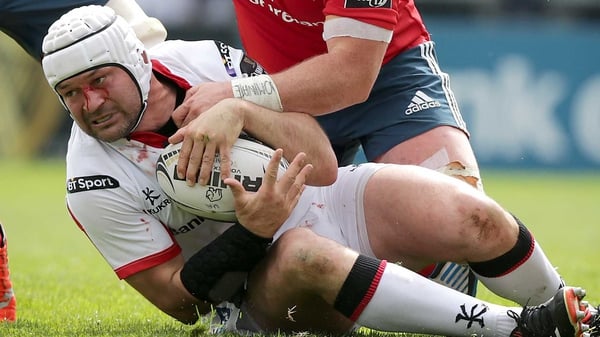