England held their nerve in the face of a second-half fightback by Australia to end a frustrating autumn with a vital 26-17 victory at Twickenham.

The Wallabies trailed 13-3 at half-time after man of the match Ben Morgan had crossed and George Ford had kicked two penalties and a conversion - but they struck back with touchdowns through Bernard Foley and Will Skelton.

Only Morgan's second try and Ford's timely readjustment of his sights after missing two penalties enabled England to emerge triumphant from a finely-poised second half that saw two well matched teams exchange blows.

If the game is a pointer to the showdown between the group rivals at next year's World Cup, then a nerve-shredding night awaits at Twickenham on 3 October that England surely enter as favourites.

Victory, only their second in seven games, offers a measure of redemption after three-point losses to New Zealand and South Africa earlier in the Autumn Series - and it was their finest performance of the month by some margin.

After Samoa were despatched 28-9 last weekend, momentum has now been generated ahead of their next outing with Wales - who are also Group A opponents at England 2015 - awaiting in Cardiff in February's Six Nations opener.

Ford is likely to continue at fly-half following another composed performance headlined by a 16-point haul, although he was not given the same space to exploit afforded by the Pacific Islanders. 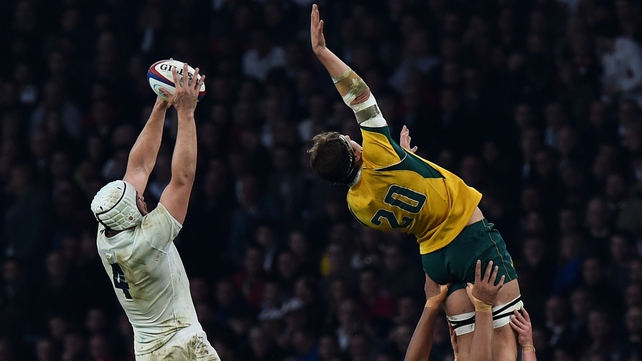 The Wallabies will have drawn comfort from the encounter themselves after proving they have the magic to unpick England's defence and will arrive at the World Cup with the belief they can upset the hosts, while also knowing their set-piece remains a source of grave concern.

Their win against one the southern hemisphere giants came against the same opponents 12 months ago, but was no evidence of the tension that has cloaked them throughout the autumn as they made a high-tempo start in perfect conditions.

Foley and Ford swapped penalties, but it was the home team who looked brighter on the ball as they trucked up the middle before going wide in search of wings Jonny May and Anthony Watson.

A senseless block by Ben McCalman on Mike Brown offered Ford an easy three points, but it then took a superb tackle by Courtney Lawes on Adam Ashley-Cooper to prevent a certain try after Israel Folau had launched a counter attack.

England showed ingenuity as they sought to create an opening for the lightening-quick May but Brown's off-load to the Gloucester wing was too high.

The high-octane opening 30 minutes continued with Foley and Nick Phipps setting Henry Speight free only for Brown and May to team-up in defence and stop the Wallaby 15 metres short of the line.

Australia prodded successive penalties into touch to set up attacking line-outs but England's tackling was strong and they weathered the storm before piecing together a try-scoring move in the 29th minute. 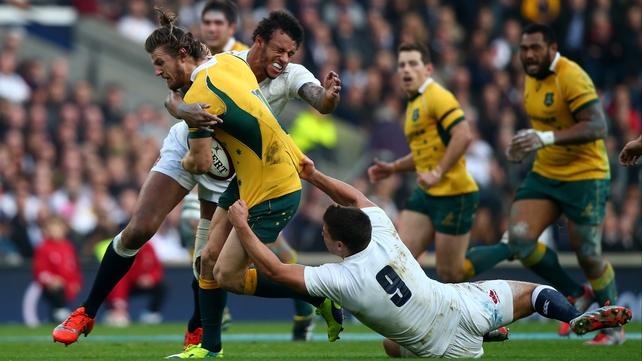 Folau knocked on a simple catch and after tightening the screw at the scrum, Brad Barritt made yards in midfield, giving Tom Wood the platform to send Morgan crashing over.

England led 13-3 after Ford converted and could have been further ahead had referee Jerome Garces not incorrectly called that Watson had knocked on as Brown, Barritt and Billy Twelvetrees raced after Ben Youngs's kick.

An impressive first half came to an end and Michael Cheika's anger was evident as the dressing room camera showed Australia's fiery head coach reading the riot act to his players.

The harsh words had the desired impact as four minutes after the interval the Wallabies crossed after a terrific interchange between Foley and Ron Horne that was simple yet effective.

Foley sent Horne through a gap close to the breakdown and then gathered the return pass to dash home under the posts. The fly-half converted his try and was immediately replaced by Quade Cooper.

Cooper sent Adam Ashley-Cooper racing through a hole - Garces had failed to spot that the pass was forward - but Australia then ran down blind alleys.

Once England had escaped, a series of smart decisions produced their second try with a five-metre scrum - secured after Cooper had been tackled over the whitewash as he gathered Brown's chip - pulverising Australia.

The set piece disintegrated and Morgan surged over for his second try with Ford converting.

A compelling Test produced another twist just three minutes later when Ashley-Cooper raced clear and Michael Hooper carried into the heart of England's defence before the giant Skelton blasted across the whitewash.

Owen Farrell had replaced the injured Barritt but Ford continued to be trusted with the kicking duties and he duly landed three points.

England led 23-17 as Australia pressed and a chance opened up on the left wing but Folau's final pass to Horne was poor and home fans breathed a sigh of relief, the result being place beyond doubt by Ford's fourth penalty.