Ireland had plenty to be proud over but ultimately will be disappointed with the way their challenge fell away against a South Africa side that looked to be there for the taking in this Guinness Series clash.

A strong first 40 minutes had put Ireland nine points ahead at the break, looking superior in virtually every department, including the scrum.

But South Africa managed to find some cohesion in the second half, including enough to score the only try of the contest through Ruan Pienaar, and ran out 16-12 winners.

Ireland started the better and soon had great field position after a piece of ill-judged rucking by the Boks.

Jonathan Sexton took an aggressive line with his kick to give Ireland a superb early chance of a try but an underthrow by early blood sub Sean Cronin saw that slip away.

But Wayne Barnes, whistle happy throughout without ever managing to free the ruck up, spotted an aerial infringement and Sexton duly popped the kick over to give Ireland the early lead.

Another three-pointer soon followed as South Africa continued to concede penalties for basic errors and, having done very little, Ireland led by six.

A crashing hit on Keith Earls by JP Pietersen and a barrelling run by Adriaan Strauss helped wake the visitors up and they were soon on the scoreboard with Pat Lambie putting over a penalty after Ireland's efforts to keep their linespeed high slipped into offside territory. 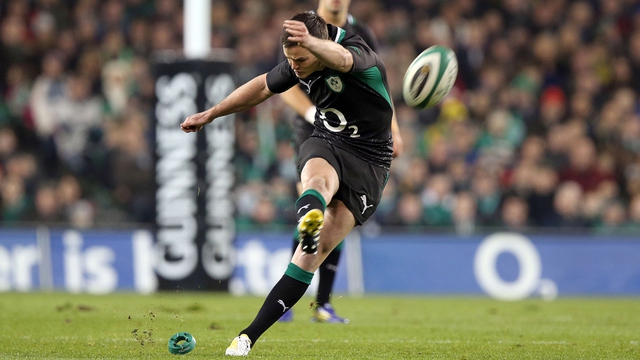 But Ireland continued to show a willingness to take on the Boks round the fringes and despite shipping some hard hits, more poorly judged rucking gave the assured Sexton another chance which he duly converted.

A quick tap by Conor Murray broke the pattern and with the crowd roaring Ireland on, the Boks were penalised for offside. Again, Sexton did the honours to put Ireland nine in front.

Pietersen, realising his team was not at the races mentally, sparked angry exchanges between the teams with a dangerous hit on Henry from the restart and was duly binned.

Ireland had their best spell of the match soon after, winning another penalty with a powerful maul.

Sexton's fifth penalty of the evening was nothing more than Ireland deserved but this time, the shot slipped just to the left from a tough angle.

Still, Ireland went in at the break dominant in virtually every area and with a nine-point cushion.

But South Africa got the quick start to the second half they needed.

Over enthusiasm saw them leave the short side undermanned and Ireland conceded yet another penalty.

The Boks kicked to the line and backed their maul to rumble over.

It didn't quite as Ireland just about held out, but it was at the cost of a yellow card for captain Heaslip.

The Boks pressed their advantage, and while they stopped the initial drive this time, Ireland cracked relatively tamely in the end with the alert Pienaar diving over under the posts.

You couldn't help but feel that much of the good work of the first half had been erased when after Lambie's conversion, Ireland's lead was cut to just two.

South Africa were quickly on the attack again after a fielding error in the backfield by Andrew Trimble and only a brilliant strip by Healy on Eben Etzebeth saved Ireland from another seven-pointer.

Peter O'Mahony was caught on the deck in his own half and Lambie was able to kick another three to give his side the lead.

Ireland's next series of attacks look promising until Healy's ill-judged one handed pick and go saw him get isolated and another chance gone.

A poor clearance by Zebo followed by a drop from O'Mahony gave them yet more red zone possession.

Ireland escaped, Mike McCarthy this time forcing the ball-carrying error, but from the scrum, South Africa got the shove on, giving Lambie an easy chance to extend the lead to four.

Kidney emptied the bench, with Michael Bent and Iain Henderson coming on for first caps.

Bent barely survived the first scrum but stayed strong and square to win a penalty on halfway that gave Ireland a fighting chance of snatching victory.

From the resulting lineout, a powerful Healy run put Ireland within 15m of the line. But that was as good as it got for Ireland, as the backline continued to be easily handled by Jean De Villiers and co out wide.

Disappointingly, the match petered instead of developing into a grandstand finish.

There were some positives, particularly in the individual performances of several of the forwards, but the bluntness of Ireland's attacking and the unforced errors will linger.