Ireland concluded their autumn series with a record victory over old foes Argentina despite sub-zero temperatures at Aviva Stadium.

Jonathan Sexton's kicking underpinned only their second win from four Tests this month, finishing with five penalties and a conversion.

Ireland scored a try in each half through flanker Stephen Ferris, who passed a fitness test on his ankle injury yesterday, and centre Gordon D'Arcy.

They will be pleased to have prevailed against attritional opposition they dared not lose to in a disappointing autumn, but it was yet another afternoon of frustration.

Heavy snow had to be cleared from the pitch, which passed an inspection this morning, in order for the match to proceed.

The 30,406 spectators who braved the treacherous conditions endured an ugly contest devoid of highlights other than the tries from Ferris and D'Arcy.

Argentina are rugged opponents who have subjected Ireland to some torrid times amid the fierce rivalry that has developed between the teams.

But while any success against the one-dimensional Pumas is to be welcomed, Ireland will rue the failure to significantly build on their 19-3 half-time lead.

Poor decision making and aimless kicking halted their momentum and played into the hands of the Pumas, who scored all of their points through the boot of Felipe Contepomi.

Neutralised at the scrum by some baffling decisions from referee Mark Lawrence, Argentina were repeatedly robbed of their greatest weapon.

The tourists could have been awarded a penalty try in the opening exchanges when Ireland were repeatedly hammered five metres out, but Lawrence gave a crucial put-in against them.

There was little respite as the Irish scrum once again went into reverse, but they managed to scramble to safety before a clever break from D'Arcy swept them into open space.

The passage of play ended with a penalty from Sexton and balance was restored with both sides conceding turnovers.

Argentina were showing little imagination in attack and any time the ball travelled beyond inside centre the move broke down.

In contrast, Ireland were far more ambitious and in the 21st minute they breached Argentina's line.

Winger Tommy Bowe drew in Contepomi to create the initial gap before offloading to man of the match Jamie Heaslip, who supplied back-row colleague Ferris with the scoring pass.

Contepomi missed a penalty and Argentina continued to suffer whenever Ireland increased the tempo.

A rampaging run from Healy down the right sent the Pumas into retreat and reward came shortly after when Sexton landed his penalty.

Contepomi hit the target after Donncha O'Callaghan was caught offside but it was only a brief lull as Sexton struck another three points.

Pumas were sent flying as Ferris set off on a muscular run and the South Americans' frustration grew as they fell foul of Lawrence's whistle at the scrum.

The half concluded when Sexton once again found the uprights.

It did not look like being Argentina's day when Contepomi missed a third penalty, but it was hard to feel any sympathy for a team which was so conservative.

When they did string some passes together, Contepomi and then Marcos Ayerza spilled the ball, although winger Lucas Gonzalez

Amorosino showed fine footwork before being halted.
Argentina were finally showing signs of life, however, and they entered the last quarter trailing 19-6 after Contepomi finally hit the target.

But any faint hopes the Pumas had of staging a meaningful comeback faded when Sexton again found the target.

The monotonous penalty duel continued when Contepomi replied with his third successful shot at goal.

Seconds remained when Keith Earls had a try ruled out by the television match official, but D'Arcy succeeded in injury time when he collected his own chip to touch down. 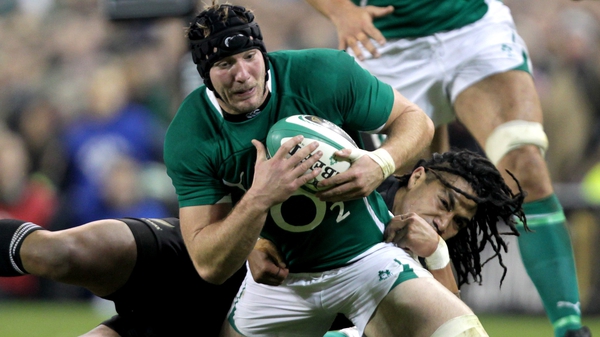