Leinster's coronation as Magners League champions came a week early as Michael Cheika's side proved far too strong for the Newport-Gwent Dragons in tonight's title decider at the RDS.

With their final two matches against the struggling Dragons, Leinster only needed one bite of the cherry to claim the win that secured their second league title.

Le Roux, who is returning to South Africa at the end of the season, and Ireland flanker Keith Gleeson were both afforded standing ovations when they were called ashore.

The 31-year-old Gleeson, who came back from a serious leg break in 2004, was playing his last game of professional rugby.

The Dragons showed plenty of heart and got over for a late consolation try with experienced prop Adam Black the scorer.

While the pre-match talk may have been about how many tries the Leinster backs would score, Le Roux stole a march on his colleagues by scoring a brace inside the opening nine minutes.

The former Springbok took a quick tap penalty and squeezed over in the fourth minute and he caught the Dragons defence napping again, five minutes later, from a similar position.

Ceri Sweeney settled the Dragons slightly with a penalty from close range but the Welsh side were turned over far too often.

The visitors' chances were helped when Leinster began to force matters a little and scrum-half Andy Williams, who will spend next week in Wexford with the Wales squad, offered his side some spark.

But Leinster got back on track before the break. Brian O'Driscoll's clever kick in-field from a position out on the right almost led to a try for Felipe Contepomi.

The Leinster captain was right on the money though in the 33rd minute when his brilliant back-handed pass put Horgan over for his sixth try of the campaign.

Contepomi converted and added a late penalty as the hosts turned around with a 20-3 buffer.
They added to their try tally in the 49th-minute when openside Jennings stepped inside two tackles to stroll over for the bonus point score.

Contepomi converted and he was also on target after scrum-half Whitaker had crossed in the right corner.

Jamie Heaslip did the groundwork for the Australian's try as he dummied and set off on a 60-metre run before linking with his number nine with a sublime offload.

Dragons winger Gareth Wyatt got over under the posts but was called back for a knock-on from Ben Daly and Leinster were soon back on the attack.

Their sixth and final try arrived on the hour mark. Contepomi began the move close to his own posts, Whitaker put Luke Fitzgerald weaving into space and then Girvan Dempsey's quick offload had Jowitt bounding over with six players in support.

Much to the crowd's annoyance, O'Driscoll was denied a try by the television match official Eanna O'Dowd as replays showed the centre had lost control of the ball over the try line.

The Dragons applied themselves well in the closing stages and after a wave of attacks, Richard Fussell passed for Black to dot down in the left corner.

But there was no denying this was Leinster's night as they celebrated their first league success since 2001 and their first silverware under Cheika. 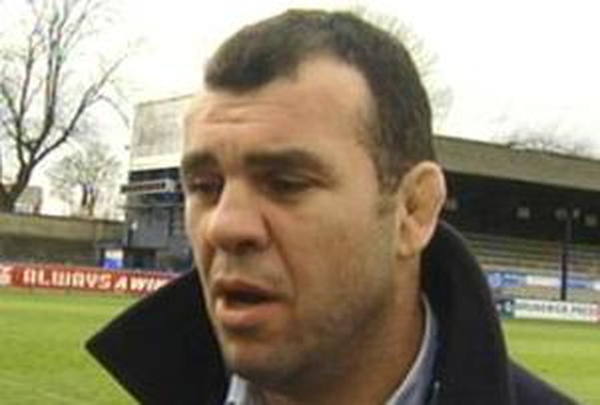