Former New Zealand prop Feek joined Leinster as scrum coach in 2010 and stepped up to Ireland a year later.

The 44-year-old has helped whip Ireland's scrum into one of the most threatening and technically proficient weapons in the Test arena, a feat that prop Healy feels deserves great respect.

Feek led the Haka against Ireland at Lansdowne Road in 2001, and will look to help underpin a third Irish win against his homeland New Zealand in three years on Saturday.

Ireland face the back-to-back world champion All Blacks in Tokyo for a place in the World Cup semi-finals this weekend.

Win and boss Joe Schmidt will make Irish history: lose and Kiwi coaches Schmidt and Feek will have presided over their final Ireland encounter.

"Feeky is a good lad, he has a different perspective from others," said Healy, when asked to appraise the former All Black, who will relinquish his Ireland role after the World Cup.

"I have worked with him for a long time through Leinster and through here, and he has added an awful lot.

"He has a different way of talking about it, and how to unite the full scrum into wanting to know about it.

"Usually it's just the front rows that want to know more about scrummaging. But getting the back-five lads involved in wanting to know how we can get better is important.

"When they know inside-out what we are looking to do, or looking not to do, even then you can feel the changes in their body shape, or pressure-wise, or even just energy before the scrum.

"You know when they are on and ready to go for it. Luckily at the moment that is most of the time and everyone is clued in, so it is a nice place to be." 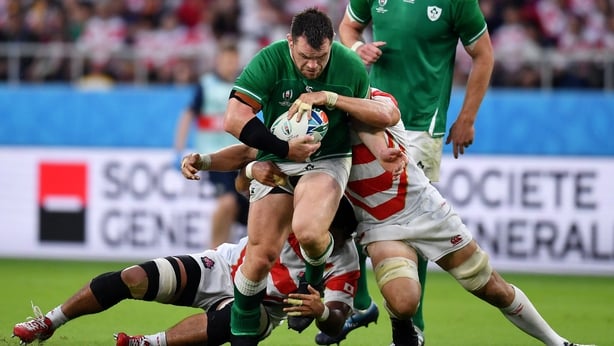 Healy has managed to shake off several injury-ravaged years to hit back to top form and can win his 95th Test cap against New Zealand this weekend.

The 32-year-old continues to form part of a destructive front-row combination with captain Rory Best and Tadhg Furlong.

Ireland have boasted plenty of power off the bench too in Japan however, with Andrew Porter and Dave Kilcoyne both hugely impressive performers.

Head coach Schmidt loves to exploit prime scrum ball for a chance to roll out his specially-devised set plays, and Saturday will be no different.

Healy admitted Ireland's pack always wants to give their talented backline every chance to flourish - especially with the ever-demanding Conor Murray and Johnny Sexton on hand.

"We have such talent outside of us. It would be a sin not to give them a good platform to play off," said Healy.

"That's where we get most of our pressure from, from nine and 10 barking at us if we don't get our scrum and lineout right.

"We want to do that and put the team on the best platform.

"If it means keeping the ball in the scrum and getting a penalty, we can do it that way, or having a solid scrum to get the ball out and let them play then we'll do it that way too."