New Ireland captain Johnny Sexton says he has been thinking about leading his country since he was a child and is "incredibly proud".

The 34-year-old will become the 106th captain of the national side when he leads out the team against Russia on Thursday morning.

Rory Best has been rested after starting the opening games against Scotland and Japan.

Leinster out-half Sexton was the 2018 World Player of the Year and will earn his 92nd Test cap, including six Lions appearances.

He said: "It's a massive honour; I spoke to Joe Schmidt this morning so I only found out myself over the last few hours.

"So I haven't even had a chance yet to tell my family or anything, but I'm sure they're going to be very proud as well.

"It's taken a while but it was worth the wait and I'm incredibly proud.

"I want to be captain now of a good performance and a good win in a World Cup game so that's my focus now.

"I don't think anything changes really for me.

"I have a big responsibility in the team for me anyway, so nothing's changed."

Sexton, who missed the defeat to Japan on Saturday with a quad strain, is one of 11 changes to the team announced by Joe Schmidt this morning.

Asked if he was back to full fitness, Sexton said: "Yes, I kicked a little bit yesterday.

"Then I kicked again today in both sessions so I feel good to go now." 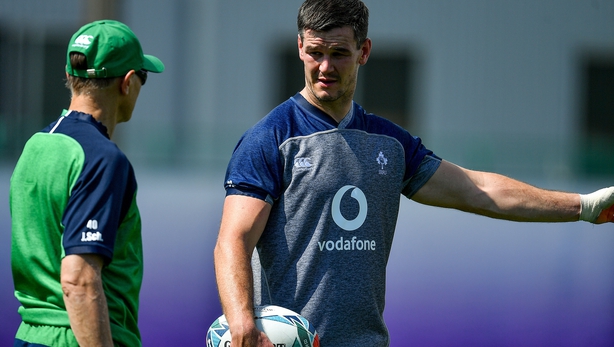 Speaking to RTE Sport's Michael Corcoran, Schmidt said of the decision to appoint the former Racing 92 man as skipper: "He has always had a big leadership role in the group anyway.

"From the time I first started six and a half years ago so it's not like anything really changes. We've still got Peter O'Mahony and Rhys Ruddock running the pack.

"It just means that Johnny will be doing the toss and making some decisions, not that he doesn't anyway.

"Besty thinks about what we might do but he says to Johnny, 'do you want to take a shot here or should we go to the corner?' because he's the kicker.

"Inevitably captains tend to talk to the kicker about what the kicker feels might be the best option both for them as a kicker but also tactically or strategically.

"Putting all those things together, and Johnny does have a bit of French, that might be important in making sure we can have a positive communication with the official (Jerome Garces of France)."