Incoming Ireland head coach Andy Farrell is anticipating a full-blooded clash against Wales in Dublin on Saturday, despite the injury risks of such an encounter on the eve of the World Cup in Japan.

Wales coach Warren Gatland and his Ireland counterpart Joe Schmidt have named line-ups brimming with experience, epitomised by the inclusion of captain Rory Best, who will be making his last ever appearance at the Aviva Stadium.

Defence coach Farrell told RTÉ Sport's Michael Corcoran: "I can assure you that there will be absolutely no holding back.

"Players want to feel what that top, top level of Test match rugby is all about.

"You tend to have to take yourself to a dark place and these players have done that in the past, and hopefully we get that feeling and relish that feeling at the weekend."

"When you hold people of that ilk back, you tend to get a coiled spring that's ready to go"

Ireland kick off their Asian adventure against Scotland on 22 September, with Saturday affording the likes of Johnny Sexton, Robbie Henshaw and Keith Earls much-needed game time ahead of the Pool A clash.

The trio will be making their seasonal debuts, but Farrell is confident of a big showing following a week where the squad’s focus has ratcheted up a notch.

"We’ve been holding those guys back a little bit to make sure that they’re correct to take the field and when you hold people of that ilk back, you tend to get a coiled spring that’s ready to go.

"The enthusiasm, the knowledge and the drive this week has upped everyone’s game." 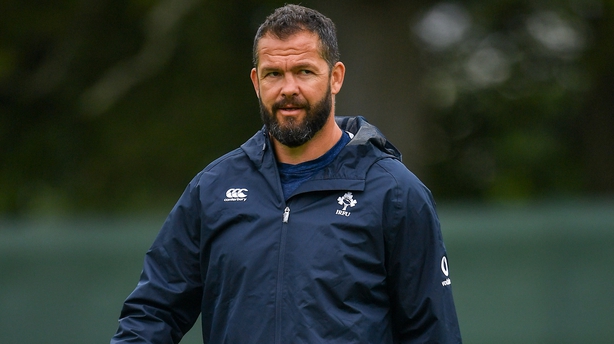 Farrell also contrasted the role the match will play in the drive for peak fitness for different players in the squad, with Ireland’s backs almost fully primed, but with the squad’s forwards a work in progress fitness-wise.

"The backs tend to be like that," the former England star admitted. "The forwards, especially the tight five, need to find their feet and they need their scrummaging legs, and their mauling legs, and their rucking legs to get attuned to everything that we’ve been doing.

"No matter how hard you train within a pre-season, there’s nothing like a game, especially in the forwards,  it’s a little bit different for the backs."

The competitive nature of the Celtic derby certainly isn’t lost on Farrell who added: "It’s always super competitive and it’s the last game of the summer series.

"Is it a friendly? Certainly not. They’re trying to put their best performance of the summer series together to gain a little bit of confidence and cohesiveness before they leave for Japan and we won’t be any different.

"The two 31-man squads realise that they can’t just sit back on their laurels now that they’re on the plane. They want to back themselves to start in that first game.

"I think bringing all the bits together is an important one.

"Making sure what we stand for internally is there for everyone to see and I’m sure you will see that spirited fight.

"Our accuracy on both sides of the ball is something that were looking for a better standard of. Why? Because come the start of the World Cup, we all know what formidable opponents we’re going to be against, so we need to make sure we’re addressing the problems this weekend, and that we’re getting on the plane in a good way."