Starting as the 2-5 favourite, Envoi Allen was coming back in trip after disappointing when sixth in the John Durkan Chase at Punchestown earlier in the month.

Shoulder to shoulder with Battleoverdoyen around the final bend, Envoi Allen produced a good jump over the last fence and was able to shake off the challenger and prevail by a workmanlike seven and a half lengths.

"He got the job done in the end" Rachael Blackmore reflects on Envoi Allen bouncing back, Minella Indo and her superb year | Watch the #Leopardstown Christmas Festival live on RTÉ2 and RTÉ Player https://t.co/XIcV18wOuP #LRCChristmas pic.twitter.com/7NhK6bYCGV

"We had a bit of a scare turning in, but he put his head down and galloped to the line," Blackmore said.

"I think Henry was right to step him back (in trip). Obviously with Chacun Pour Soi being out it changed the dynamic of the race, but it's great to get his head in front.

"He felt good today, they can only beat what they are up against I suppose and I'm happy with him."

Bookmakers were generally unimpressed with the manner of victory, pushing the Cheveley Park Stud-owned winner out in the betting for both the Ryanair Chase and Champion Chase at Cheltenham in March.

The four-year-old was third in the Royal Bond Novice Hurdle, also a Grade One event, at Fairyhouse last month and built on that performance to strike at 5-2.

A length and a half behind was stablemate Three Stripe Life, who was a 4-1 chance having won his hurdling debut in early November.

The performance of the winner was made even sweeter for Elliott as it was stable jockey Jack Kennedy's first success since breaking his arm at Navan early last month.

"That was great and it’s great for Jack as it’s his first winner since coming back. It was a perfect result," he said.

"I was happy the whole way until the second-last but he just got wiped out there, both horses did but they both showed guts and came back. They are two nice horses for the future.

"The winner is a big chaser, if you look at him, and he’s not going to be a horse until next year."

"Today was probably the worst he has jumped but he has done it" - Jack Kennedy expects big things from Mighty Potter after his first Grade 1 success | Watch the #Leopardstown Christmas Festival live on RTÉ2 and RTÉ Player https://t.co/XIcV18wOuP #LRCChristmas pic.twitter.com/EYEH2cPUN0

Of possible Cheltenham targets Elliott said: "We’ll get today out of the way and then we’ll see what happens."

Of Three Stripe Life Elliott also added: "I was very happy with him. It was only his second run over hurdles and he’s a very good horse.

"He’s raw, but Davy (Russell) was happy with him, he was a bit annoyed at himself as he got stopped at the second-last. He said there is a lot of improvement in him as well." 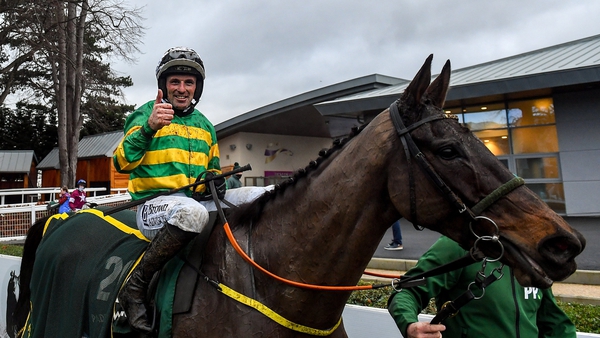