Indigo Girl defied a slow start and signs of greenness to triumph in the bet365 May Hill Stakes at Doncaster.

John Gosden's filly had won her only previous start at Yarmouth and was sent off a 100-30 chance in what looked a strong Group Two.

The Clarehaven handler was winning the race for a fifth time, having last prevailed with Rainbow View in 2008 in the same George Strawbridge silks.

A sister to the Group One winner Journey, Indigo Girl broke awkwardly from the stalls which meant she was at the back of the field early.

However, she made eyecatching progress up the stands side with three furlongs to run and was soon challenging Dubai Fountain for the lead.

Her lack of experience told as she then jinked to her left, while favourite Zabeel Queen on the far side was also running off a straight line.

However, once Frankie Dettori was able to get her straightened up to a certain degree, the daughter of Dubawi went on to win by three-quarters of a length from Dubai Fountain, with Zabeel Queen a length away in third.

Gosden said: "She relaxed beautifully, which is key, and smoothly came through. I admit when she hit the front she ran around, but that’s the trainer’s fault because when I work them at home, I don’t like them bursting clear and breaking another one’s heart.

"She’s obviously got a lot of talent. As long as she continues to enjoy her racing, she can move upward."

Considering future targets, the trainer added: "There are two options this year – the Prix Marcel Boussac and the Fillies’ Mile. We could look at either of those or wait until next year, we’ll just have to see at this stage.

"Her mother (Montare) won a Prix Royal-Oak and her full-sister (Journey) won the Fillies & Mares Stakes on Champions Day at Ascot over a mile and a half. Funnily enough, I see this one as more of a mile to a mile-and-a-quarter filly.

"She travels strong and has a great turn of foot."

Dettori said: "I rode Journey (her sister) and she’s the same type – not over-big, but she’s got loads of gears. It’s my first time on her.

"She travelled smoothly, quickened well, ran a bit green and went left and right, but it’s only her second start so you can excuse her for that.

"She’s from a talented family. Everything is in the right place and I really like her." 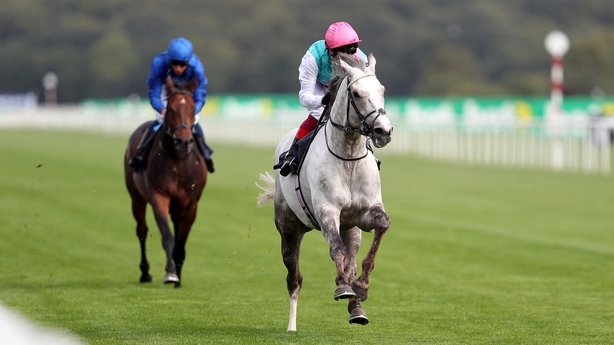 Last year's St Leger winner Logician maintained his unbeaten record for Gosden and Dettori with a facile victory on his eagerly-awaited return in the Sky Sports Racing Sky 415 Conditions Stakes.

Facing only one rival in Charlie Appleby’s Mythical Magic, Logician was sent off a 1-12 shot and the manner of his win reflected that price.

A sick horse over the winter, he was back on track almost a year to the day since his Classic success on Town Moor, but he was racing over half a mile less.

Dettori bounced him out of the stalls and Gosden’s grey was keen enough early, but he was not going fast enough for Mythical Magic, who took over briefly turning into the straight.

Once Dettori asked Logician to quicken, his sole rival could not go with him and he was ridden out with just hands and heels for a comfortable seven-length win.

Gosden said: "He’s having what I call a nice blow, not a stressful blow. You’ve got to remember this horse had two months in intensive care and I can have nothing but praise for the veterinarians at the Newmarket Equine Clinic for saving his life twice, so that he can be here today.

"We’re very pleased to see him back, it’s been a long road."

As for the future, Goden said: "There’ll be no immediate plans. He’s well entered in the autumn, but I’d like to see how he is in the next 10 days before even thinking about another race.

"If you’d seen him in the clinic, as I did, I thought I’d never see him again. Just to get him back here is extraordinary in itself.

"We couldn’t be more pleased at this stage, but I don’t want to commit to anything now.

"Anything is possible. We’re on the cusp of the autumn if we want to run again this year, but the horse will tell us.

"I think having missed most of this year, next season for a big, strapping horse like him, as a five-year-old, is very much a key option. I think one might have one’s mind focused on that, as much as anything else.

"We know a mile and a half is spot-on for him, so next year he’ll have races like the King George as an absolute target."

Dettori told Sky Sports Racing: "It was a good effort by the team. I have hardly seen him this year, obviously. It’s well documented he’s been sick.

"I rode him the other morning. He didn’t give me the feel he gave me in the Leger, but he came to the races today, he went through the gears, he was moving well. OK it was a non-event, but at least we got him back.

Pista continued her progression when powering home in impressive fashion to win the bet365 Park Hill Fillies' Stakes at Doncaster.

The three-year-old seemed suited by the step up in trip last time out when winning a Listed race at Leopardstown, but this contest marked a rather steep rise in grade.

Last of the field turning into the straight, the rangy filly really hit her stride in the final furlong.

Snow had set the pace but was back-peddling when the favourite Believe In Love took over, although she had no answer to Pista (6-1), who flew home under William Buick to win by a length and a half from Vivionn.

Victorious trainer Joseph O'Brien was landing a rare Group race that his father, Aidan, has still to cross off his list, while Pista was giving her sire American Pharoah a notable winner in England.

"I thought William gave her a great ride. I was a little worried because he was a little bit further back than we'd planned for most of the way and she ran around a bit in the straight, but she's got a big engine," O'Brien told ITV Racing.

"She's a tall filly, so hopefully she'll progress next season.

"There's a nice fillies' race on Arc weekend (Prix de Royallieu) that might suit her now if she comes out of this well."

Line Of Departure completed a hat-trick for Roger Varian in the Weatherbys Racing Bank £200,000 2-Y-O Stakes.

After the colt failed to get his head in front in his first three starts, his Newmarket handler decided to dispose of the blinkers – and it seems to have done the trick, with Line Of Departure opening his account at Yarmouth before following up at Ascot last month.

A 15-2 shot for his latest assignment, the son of Mehmas responded to David Egan's urgings to score by a length and a quarter from 7-2 joint-favourite Yazaman.

Varian said: "He’s done nothing but improve. I ran him in his first three starts in blinkers, because he didn’t show anything at home.

"I don’t know where the ceiling is with this horse, he gets better and better."